Top 10 Supernatural Anime Movies & Shows That Will Give You Chills

Looking for the best supernatural anime movies and shows that will give you chills?

We’ve got everything from ghosts and ghouls to death gods, from hilarious afterlife hi-jinks to terrifying devourers of human souls.

I asked my resident anime addict…er, expert…to pick his top ten favorites from a sea of supernatural anime. 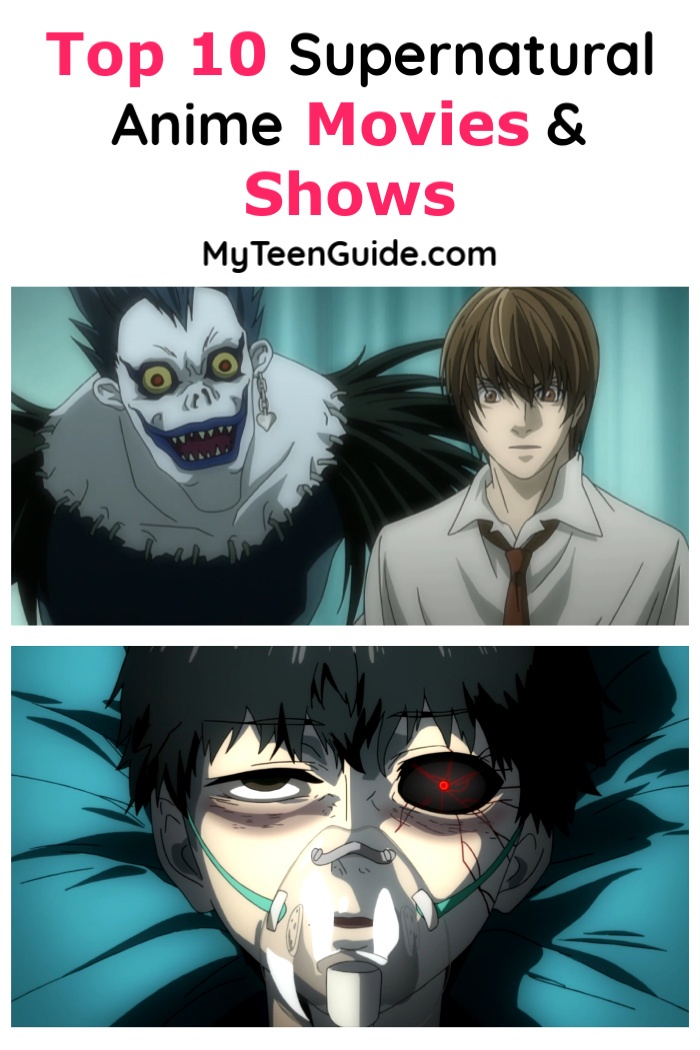 Read on to find out which ones he recommends!

First though, let’s talk a bit about the supernatural themes in anime.

What is Supernatural Anime?

The supernatural plays a large role in so many anime movies and shows, so it’s really hard to say “these are the top 10 supernatural anime.”

In the US, while it’s a popular genre, there’s a relatively short list of shows that fit into the supernatural category, compared to, say, legal dramas or crime shows. Trust me, I know. I’ve binged-watched almost all of them several times and spent hours searching for more!

See, while nearly half of all Americans believe in ghosts, according to this poll, they aren’t really a major part of our culture.

Sure, we tell ghost stories around the campfire, but to most, that’s all they are…stories.

Check out this video about mystical creatures from Japan, then read on for more info about the role of the supernatural in the Land of the Rising Sun.

The role of the supernatural in Japan

In the Japanese culture, the vast majority do believe in ghosts. I can’t find exact numbers, I’m sorry.  I can tell you as someone who lived in Japan for two years that ghosts and the supernatural are a large part of their culture.

In fact, they have six different names for different types of ghosts, from the vengeful martyred Goryo to the Zashiki-warashi, mischievous child-ghosts!

While in the US, our ghosts are usually connected to a specific house, chunk of land, or person, Japanese supernatural creatures roam the entire countryside!

Some of the freakiest include:

From epic festivals to simple things like sweeping “evil” out your front door with a broom, the supernatural plays a significant role in Japanese culture, so it makes sense that it would play a big part in their entertainment.

That said, there are some movies and shows where it features more prominently than others.

Let’s check out the top 10 supernatural anime now, shall we?

This post contains affiliate links. If you make a purchase through these links, we earn a small commission at no extra charge to you. I’ll tell you where to find it streaming, plus give you the link to grab it on Amazon (some are Prime Video, others you’ll have to buy).

Perhaps the most popular supernatural anime right now, Death Note is the story of a Ryuk, a shinigami (a god of death), that can kill anyone…provided you write their name in a notebook called a Death Note (and as long as the victim is within his line of sight). Here’s the simplified plot:

It’s one of my son’s favorite anime on Netflix. Just make sure you’re watching the subbed anime and not the sub-par live action movie.

Another one of my son’s favorites, Tokyo Ghoul is a popular and totally creepy supernatural anime about ghouls that roam Tokyo. Yeah, that’s a little too over-simplified, right? Okay, so here’s the story:

This one is streaming on Hulu, both dubbed and subbed.

Blue Exorcist is perfect for those looking for a supernatural anime that features creatures that we kind of already know from our own superstitions- the devil. In Blue Exorcist, two mirrored worlds exist parallel and attached to each other.

Find it both dubbed and subbed on Hulu, or subbed on Netflix or Amazon Prime Video.

If you’re looking for a fun supernatural anime that’s not quite so heavy on the horror, you’ll love Angel Beats! Here’s a quick run-down:

My son watches this one on Crunchyroll, a subscription service for anime lovers. I can’t find it anywhere else, except to buy on Amazon.

Life’s hard when you’re just a minor god without a single shrine dedicated to you. How demeaning it is to have to do odd jobs for a mere 5 yen (which is basically a nickel) each. Even more so when your weapon partner runs out on you! That’s life for Yato, a “Delivery God” who dreams of having his own slew of worshipers!

Find this one on Hulu both dubbed and subbed.

Remember how we talked about devourers of souls above? Well, here they are! Hollows, a main antagonist in Bleach, are spirits that like to eat souls.

Bleach was on Netflix, but as of today, it’s gone, along with Naruto and Inuyasha. It’s still on Hulu and Crunchyroll, though.

If you want a supernatural anime that feels the most like the supernatural ghost story genre in the West, Another is the way to go. It’s a good introduction to the genre for new anime fans, since it’s full of elements that we recognize from our own horror films.

Another is available subbed on Hulu.

8. High School of the Dead

What would you do if the dead suddenly started rising all over your country? That’s what happens to Japan in High School of the Dead!

Find it subbed and dubbed on Hulu.

If vampires are your supernatural creature of choice, you’ll love Bakemonogatari.

Find it subbed on Hulu and Amazon Prime Video.

Find it subbed on Hulu and Netflix

Now that we’ve checked out our top ten picks for the best supernatural anime, let’s talk a little about the best places to find these and more anime shows.

So, I want to talk about this for a moment because there are hundreds- if not thousands- of anime movies and shows, and some streaming services have a more robust catalog than others. Right now, we have four streaming service subscriptions that my son uses for his anime binge-fests.

While Netflix is probably the most popular streaming service in general, up until recently I wouldn’t have called their anime category robust.

Inverse has a list of all the anime coming to Netflix this year, so check it out.

Before Crunchyroll (which we will get to in a minute), Hulu was THE place for my son to find anime. He loves that so many of the shows are both dubbed and subbed.

has a pretty good catalog of anime, and if you’re already a Prime Member you can watch them without paying an additional fee. (I hate when people say “watch it free on Amazon Prime Video,” because technically you’ve already paid for it with your subscription. )

Crunchyroll is new to me, but very popular with anime fans. My son pays $7 for a monthly subscription. Well, actually, I pay for it, but that’s besides the point.

While these are the four places to watch anime online that we use the most, there are a few other sites & services worth checking out. These include: