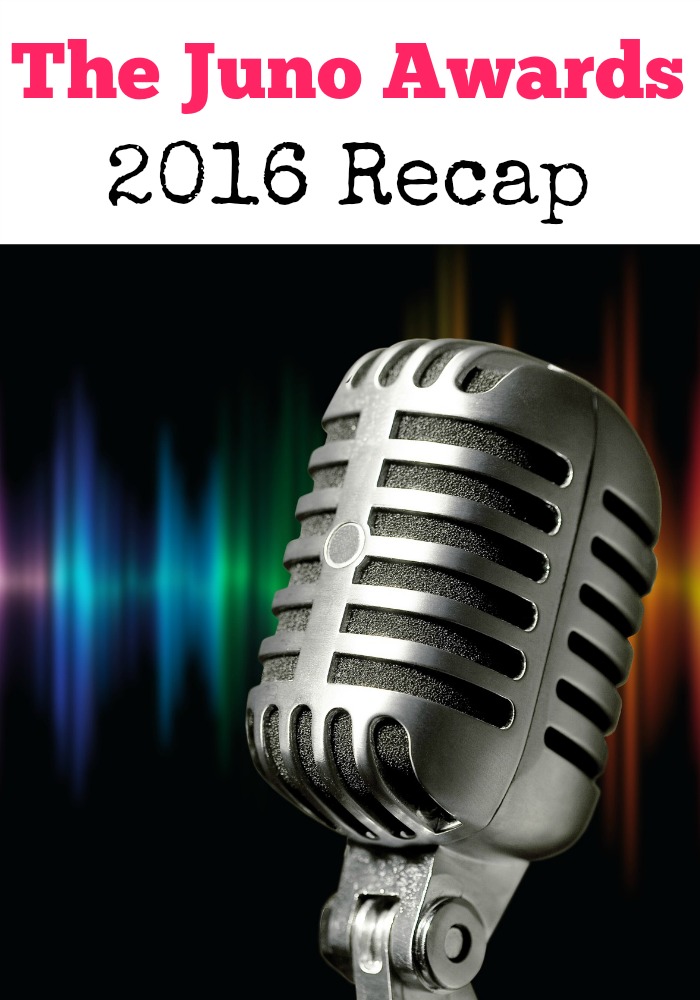 If you love the best music in the industry with half the drama for your mama, then you need to see our 2016 Juno Awards recap. Canadian artists know their music. I bet you recognize more than a few of these artists, and if you don’t then you have some music to catch up! I simply love the sounds happening in music this year. I literally can’t even. Sure there is Justin Bieber saying “sorry’ a lot (A little Canadian joke! The Biebs should be saying sorry after how he treats Selena Gomez!). Look past the Biebs and you find an amazingly talented group of nominees like Shawn Mendes, The Weeknd, Alessia Carr and one of my favs Walk Off The Earth (fangirl squeal!) who were simply slaying the Juno Awards last night.

The 2016 Juno Awards Recap: The Hosts And Preshow Awards

The 2016 Juno Awards were held live last night at the Scotiabank Saddledome in Calgary, Alberta, Canada. The show’s hosts were Juno Award winner Jann Arden and the host of The Amazing Race Canada, Jon Montgomery. Most of the awards were presented on April 2, 2016, at the Juno Gala Dinner and Awards, hosted at the Calgary TELUS Convention Center. Also, awards were also presented for the Walt Grealis Special Achievement Award to Rosalie Trombley, and the Allan Waters Humanitarian Award is awarded to Arcade Fire for their contributions to several non-profit organizations. At the gala dinner before the event, there was also a couple of excellent performances such as Young Empires singing “The Gates,” Jazz All-Stars performing “Mr. Clean,” and the Afiara Quartet & Skratch Bastid sharing a musical cross between orchestra and electronic with “Through The Invisible.” My favorite performance was Fortunate Ones singing “Wherever You Go.”

The show opened with newcomer Alessia Cara singing two songs: Here and Wild Things. She did a simply fab job. I have heard her song Wild Things before but this was my first time hearing Here live, beautiful song!

The hosts of tonight’s show, Jann Arden, and Jon Montgomery took the stage. Jann commented, “One of the reasons I took this job was to increase my Twitter Canada followers.” Ha, aren’t we all Jann.

Scott Helman takes the stage to perform his song, Bungalow. After his amazing and bright performance, he presented the award for Group of the Year to Walk Off the Earth. Their acceptance speech included, “If you have a dream, go out and go for it.” Walk Off The Earth are the cutest ever, and have an awesome sound.

Buffy Sainte-Marie is onstage to perform a spoken word piece for her hit song, Carry It On. This piece was full of passion and focused on the environment, urging all to take care of Mother Nature.

The award for Single of the Year was presented by Buffy Sainte-Marie, to The Weeknd for his song Can’t Feel My Face. His speech was short, but he did say, “I want to thank my fans, you’ve been with me since day one!”

Shawn Hook takes the stage for his song Sound of Your Heart. Great performance and man, can he play the piano. Next performance is LIGHTS performing her song Running with the Boys along with local performer Sam Spensley. The performance was to promote MusiCounts, Canada’s charity for music education that is partnered with The Canadian Academy of Recording Arts and Sciences. It was truly a beautiful, heartwarming performance. Two more performances were up next: country singer Dean Brody with Bring Down the House and Coleman Hell with his song, Two Heads. Brody reminds me of a cross between Eric Church and Jason Aldean. He wears the sunglasses like Church does and the cowboy hat like Aldean. Both great performances.

Jus Reign, the creator of Much Digital Studios and Kardinal Offishall, Canada 150 Ambassador, present the award for Best Country Album to Dean Body for his album, Gypsy Road. Congrats to him, well-deserved!

Then we had four more performances back to back. Shawn Mendes killed it with Stitches, married couple duo Whitehorse performed Tame as the Wild Ones, The Weeknd slayed the song Acquainted and lastly Might Not and Dear Rouge with I Heard I Had.

Alan Doyle and Melanie Joly, Minister of Canadian Heritage, present the award for Breakthrough Artist to the well-deserving and talented Alessia Cara. During her speech, she said, “I’m just a regular girl who lived the most normal life, and I released a song and it hasn’t been the same since.” Keep an eye on Alessia Cara; she has a big future ahead.

Canadian rockers from Alberta, Nickelback, inducts Burton Cummings into the Canadian Music Hall of Fame. During his speech he stated, “This belongs to all of you. I will always try to honor the music, thank you so much.”

Rock legend and icon, Bryan Adams, takes the stage for a performance of his newest song, Go Down Rockin’. Let me tell you at age 56, this guy can still rock the stage. Loved it!

The show closes with a fitting tribute to Burton Cummings, featuring Shawn Hook and Jann Arden singing Break It to Them Gently, The Tenors singing Stand Tall and Burton Cummings and his band, The Carpet Frogs, singing My Own Way to Rock!

The 2016 Juno Awards Recap: The Big List Of Nominees & Winners

SINGLE OF THE YEAR

INTERNATIONAL ALBUM OF THE YEAR

ALBUM OF THE YEAR

GROUP OF THE YEAR

BREAKTHROUGH ARTIST OF THE YEAR

BREAKTHROUGH GROUP OF THE YEAR

SONGWRITER OF THE YEAR

COUNTRY ALBUM OF THE YEAR

ADULT ALTERNATIVE ALBUM OF THE YEAR

ALTERNATIVE ALBUM OF THE YEAR

POP ALBUM OF THE YEAR

ROCK ALBUM OF THE YEAR

VOCAL JAZZ ALBUM OF THE YEAR

JAZZ ALBUM OF THE YEAR: SOLO

JAZZ ALBUM OF THE YEAR: GROUP

INSTRUMENTAL ALBUM OF THE YEAR

FRANCOPHONE ALBUM OF THE YEAR

CHILDREN’S ALBUM OF THE YEAR

CLASSICAL COMPOSITION OF THE YEAR

RAP RECORDING OF THE YEAR

DANCE RECORDING OF THE YEAR

R&B/SOUL RECORDING OF THE YEAR

REGGAE RECORDING OF THE YEAR

ABORIGINAL ALBUM OF THE YEAR

CONTEMPORARY ROOTS ALBUM OF THE YEAR

TRADITIONAL ROOTS ALBUM OF THE YEAR

BLUES ALBUM OF THE YEAR

CONTEMPORARY CHRISTIAN/GOSPEL ALBUM OF THE YEAR

WORLD MUSIC ALBUM OF THE YEAR

PRODUCER OF THE YEAR

RECORDING ENGINEER OF THE YEAR

RECORDING PACKAGE OF THE YEAR

VIDEO OF THE YEAR

ELECTRONIC ALBUM OF THE YEAR

HEAVY METAL ALBUM OF THE YEAR

ADULT CONTEMPORARY ALBUM OF THE YEAR

So lovelies, what did you think of the 2016 Juno Awards recap? Did you see any of your fav artists take home an award? Is there anyone on this list that you rock out too? Tell me in the comments!