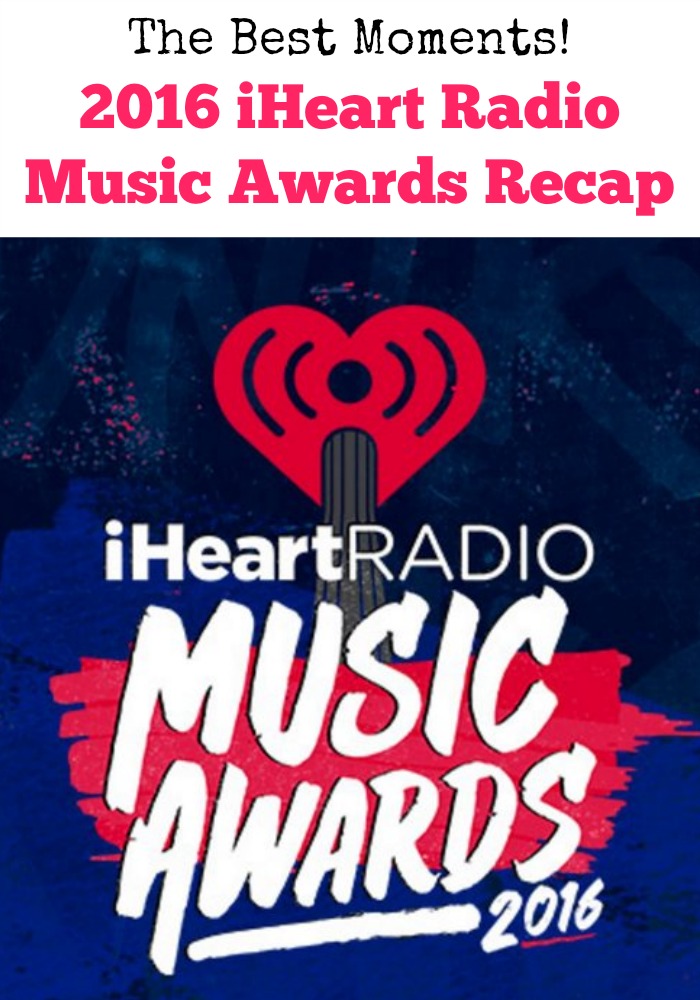 The 2016 iHeart Radio Music Awards recap is here, and we have all the best moments and details you may have missed during the show! I always love to read recaps myself after award shows because there are so many juicy details you may have missed! This 2016 iHeart Music Awards recap is no exception, with plenty of juicy Bieber gossip. Taylor Swift was charming us all, and Rihanna was pulling out all the stops! There were also plenty of new songs that premiered for the first time live including Meghan Trainor, G-Eazy and Jason Derulo.  See my full 2016 iHeart Music Awards recap now for all the best (and worst!) moments!

Everything You Missed: The Full 2016 iHeart Radio Music Awards Recap

The iHeart Radio Music Awards were presented live from The Forum in Los Angeles, California. The show’s host was singer Jason Derulo. Several of the awards were handed out before the show. I listed my predictions, which I didn’t do so well on, below along with all the big winners.

The show opened with Justin Bieber singing his hit song Company. One lucky fan in the audience got to dance with Bieber during the performance. Demi Lovato and Brad Paisley performed a duet of Lovato’s song Stone Cold. Why was Paisley not at the ACM Awards?

Jason Derulo opens the show by shaking and dancing his way through some popular hit songs, including Jumpman by Drake and Future, Hey Mama by David Guetta, Bad Blood by Taylor Swift, Trap Queen by Fetty Wap, Work by Rihanna and Lean On by Major Lazer and DJ Snake.

Justin Bieber takes the stage to sing a medley of his songs: Love Yourself and Company. One lucky fan in the audience even got to dance with Bieber during his performance. Bieber appeared on stage with baggy clothes and dreadlocks. Yes, I said dreadlocks. Bieber and dreadlocks just don’t mix, in my opinion. Can we keep his songs and send his look packing? Maybe we can send him to the Juno Awards.

The biggest bit of gossip is that on again, off again flame Selena Gomez was nowhere to be found during the performance and that later behind stage they didn’t speak to each other. Selena’s bestie Taylor Swift also seemed unimpressed by the Biebs performance, barely warranting a clap from a usually enthusiastic Taylor. Oh the drama, are Selena and Justin done for good this time? Don’t worry Selena, your bestie Taylor has your back!

Country star Brad Paisley presents the award for Female Artist of the Year to Taylor Swift. Swift was beaming with pride as she accepted her award. Brad Paisley seemed a little excited for her too.

Meghan Trainor takes the stage to perform her hit song No. This performance is the first time that she has sang “No” live. Meghan looked amazing donned in a slick black and red dress and her performance featured over 20 female dancers. Credit where credit is due, Meghan Trainor was obvi on top of her game tonight.

2 Chainz presents the award for R&B Artist of the Year to Chris Brown. Pete Wentz from the rock group Fall Out Boy, presented the award for Biggest Triple Threat to Selena Gomez, for her work as a singer, actress, and dancer.

Charles Barkley, James Jones, and Kenny Smith are live in Houston, Texas at the 2016 NCAA March Madness Music Festival, where Pitbull is onstage performing his song Fireball. Not sure if he was having technical issues but his vocals were louder than the music. Other than that, Pitbull was his usual charming and sexy self.

Back in Los Angeles, Fetty Wap performs his hit song Again. Fetty had a cool performance, and he took the stage on an ATV.

Professional dancer Julianne Hough presents the award for Dance Artist of the Year to Calvin Harris. During his speech, cameras zoned in on Taylor, who was gazing at him on stage with cute, puppy dog eyes.

Kelly Osbourne and on-air radio personality Bobby Bones introduce the next performance: Demi Lovato and Brad Paisley performing Demi’s hit song Stone Cold. What an amazing performance, one that will probably be talked about for days and weeks to come. She belted out the tune with such emotion and such power. Paisley did an incredible job playing guitar during the performance.

Justin Timberlake takes the stage to present the award for Best Tour to Taylor Swift. During his presentation, he made time for a political jab at Donald Trump: “Some people are out here to build walls – I ain’t naming no names. That was a political joke, shut up you can’t even joke – I’m kidding.” Taylor invites us to knock down walls and be on her #squad.” During her acceptance speech, Taylor thanked her boyfriend by saying, “For the first time, I had the most amazing person to come home to when the spotlight went out and when the crowds were all gone, so I want to thank my boyfriend Adam for that.” Referring to boyfriend Calvin Harris, real name Adam Richard Wiles.

Trey Songz showcases the presentation of Song of the Year to Adele for her song Hello. She was broadcast from her concert appearance on March 30, 2016, in Birmingham, England.

Diplo introduces the next performance: Chris Brown. Brown does a 4-song medley of his hit songs including Liquor, Back to Sleep, Wrist, and Anyway. I love Chris Brown and his natural dance moves. Great performance.

Wiz Khalifa presents the award for Best New Artist to Fetty Wap. During his speech, Fetty said, “I just want to thank God for this, my fans, iHeart Radio.”

Iliza Shlesinger introduces the next performance: G-Eazy and Bebe Rexha performing Me, Myself and I. This was G-Eazy first performance at an award show. He seemed like a pro up there on stage.

Pharrell Williams presents U2 with the Innovator Award. In his introduction, Williams says about the band, “These are the type of guys if they see a problem, they don’t just sing about it, they do their best to fix it.” During their acceptance speech, Bono said, “As strange [as it is] to say, there are places around the world where making music is a crime, where you can go to jail for expressing an opinion, where you can get a punch in the face for disagreeing with some politician somewhere. That could never happen here. Could it?”

Big Sean presents the award for Dance Song of the Year to Skrillex, Diplo and Justin Bieber for their amazing song Where Are U Now.

Keke Palmer introduces the performance of DNCE, singing their hit song Cake by the Ocean and Le Freak with special guest Nile Rodgers. There was a cute moment during the performance when DNCE frontman, Joe Jonas, went out into the audience and serenaded Demi Lovato, as she rocked out to the song.

Professional dancer and choreographer, Derek Hough, and star of The Vampire Diaries, Kat Graham, present the award for Male Artist of the Year to Justin Bieber.

Back in Houston, Texas at the 2016 NCAA March Madness Music Festival, Maroon 5 perform their song Animals. Like Pitbull’s performance, Maroon 5 didn’t sound totally right. They were live but just not at The Forum in Los Angeles.

Singer and songwriter, Nicky Jam, introduces Jason Derulo, who performs his hit song If It Ain’t Love. The single premiered on April 1, 2016, and this was his first live performance of the song.

The award for Best Fan Army was presented to Justin Bieber and his Beliebers. Also, the award for Most Meme-able Moment was awarded to Taylor Swift.

Actor Adam Rodriguez presents the award for Latin Song of the Year to Nicky Jam and Enrique Iglesias for their song El Perdon.

Zendaya introduces ZAYN and his performance Like I Would. If you look up the word ‘slay’ in the dictionary, I am pretty sure it would say ZAYN next to it. As a former member of One Direction, he totally nailed his solo performance. It was cool how the stage featured thousands of lasers as ZAYN performed.

The Weeknd performs live via the 2016 Juno Awards, performing Acquainted and Might Not, with special guest Belly. This was definitely one of the top performances of the night. He totally slayed his performance.

Selena Gomez takes the stage to present the award for Album of the Year to her BFF Taylor Swift for her album 1989.

The award show closes with a stunning performance of Team by Iggy Azalea. Iggy shared the stage with a real-life jet featuring graffiti.

That’s it for this 2016 iHeart Radio Music Awards recap. Check below for the full list fo winners!

Song of the Year

Female Artist of the Year

Male Artist of the Year

Best Duo/Group of the Year

Alternative Rock Artist of the Year

Alternative Rock Song of the Year

Rock Artist of the Year

Rock Song of the Year

Country Song of the Year

Country Artist of the Year

Dance Song of the Year

Dance Artist of the Year

Hip Hop Song of the Year

Hip Hop Artist of the Year

R&B Song of the Year

R&B Artist of the Year

Latin Song of the Year

Latin Artist of the Year

Regional Mexican Song of the Year

Regional Mexican Artist of the Year

Best Song from a Movie

So what did you think of the 2016 iHeart Music Awards recap? Things were a bit Taylor/Selena/Bieber heavy this year! Who was your favorite artist who won? Tell me in the comments!