The 2016 Academy Of Country Music Awards Recap: All Of The Big Winners 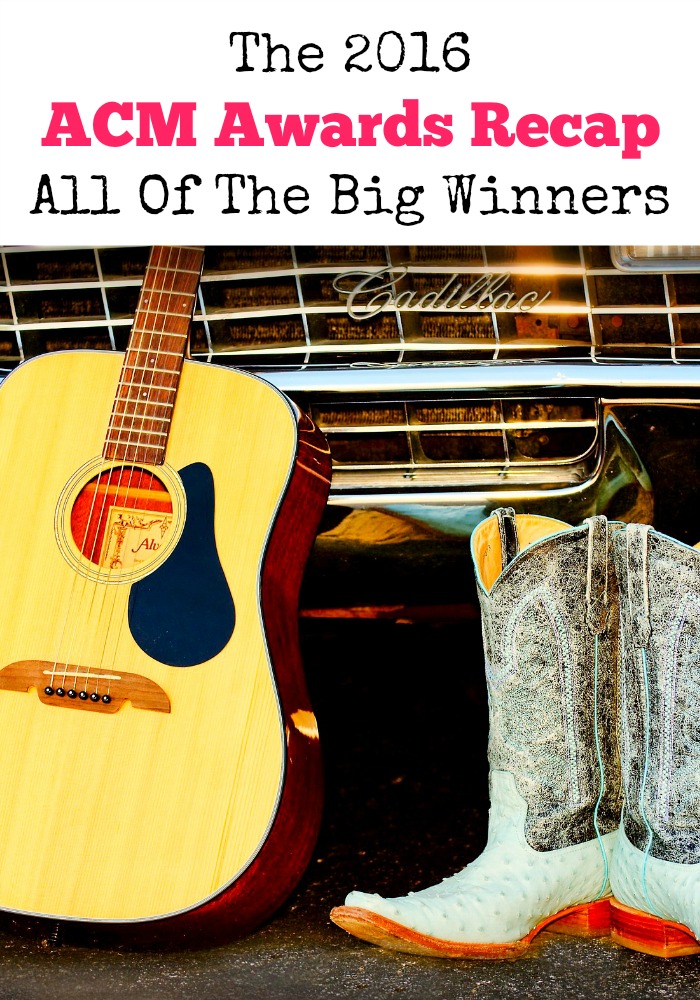 Last night brought us plenty of fantastic LIVE country performances, and we have all the details with the full 2016 Academy Of Country Music Awards Recap! Most of this 3-hour show is filled with performances from today’s biggest country stars, so it’s like watching the best country concert ever with all of your favorite artists. While there was tons of good country, Tim Mcgraw brought down the house with his performance of his newest song “Humble and Kind.” Check out who else was racking up the awards this year in our full 2016 Academy of Country Music Awards recap.

Check out who hosted, who killed their performance and who went home as a big winner in 2016 Academy of Country Music Awards recap. At the bottom of this recap, I’ve included the big list of nominees and winners if you’re dying to know if your favorite won!

This year’s show is held at the MGM Grand Garden Arena in Las Vegas, Nevada. The hosts of the show are country music superstars Luke Bryan and Dierks Bentley. The awards for New Male Vocalist of the Year (Chris Stapleton), New Female Vocalist of the Year (Kelsea Ballerini) and New Vocal Duo or Group of the Year (Old Dominion) were announced ahead of the show on March 23, 2016. The awards for Vocal Duo of the Year (Florida Georgia Line), Video of the Year (Mr. Misunderstood by Eric Church) and Vocal Event of the Year (Smokin and Drinkin by Miranda Lambert and Little Big Town) were presented on April 1, 2016. There was a private party at the Delano Hotel in Las Vegas, Nevada to present these awards.  Oh to have been at THAT party. I think my invite must have got lost in the mail. 😉

2016 Academy of Country Music Awards Recap: All The Performances

The show opens with Luke Bryan and his performance of Huntin, Fishin and Lovin Every Day. He was joined onstage by last year’s co-host Blake Shelton. Shelton then sang his newest song Came Here to Forget. This song was both beautiful and emotional. The song is about his ex-wife Miranda Lambert and new love Gwen Stefani. Kenny Chesney takes the stage to sing his song Noise. Not a huge fan of his but the song wasn’t half bad.

Jana Kramer and Von Miller present the first award of the evening for Song of the Year to Chris Stapleton for his song Nobody to Blame, which he also co-wrote.

Chris Young and Cassadee Pope sing their hit duet Think of You. I really like these two singing together, and the performance was fab.

Eric Church is up next with his song Record Year, and he also sings a tribute to David Bowie, Glenn Frey, Lemmy and Scott Weiland during the performance. Not a fan of Eric Church but the tribute is very nice. I think I prefered Lady Gaga’s David Bowie tribute at the Superbowl. Dierks Bentley takes the stage for a performance of Somewhere on a Beach, followed by Cam and her song Burning House. Both were decent performances, nothing spectacular though. It’s too bad, I really like Cam and was hoping she would shine a little brighter tonight.

Jake Owen and Miss America Betty Cantrell present the award for Single Record of the Year to Thomas Rhett for Die a Happy Man. Love that song.

Little Big Town performs their hit Stay All Night with Trombone Shorty. Garth Brooks is live via satellite from Ottawa, Canada to present the award for Album of the Year to Chris Stapleton for his album Traveler.

Well, here is an odd pairing: Nick Jonas and Kelsea Ballerini perform two of her songs: Love Me Like You Mean It and Peter Pan. The only problem is that Nick Jonas was only performing for like the last 2 minutes of Peter Pan. I was hoping to see more of him in the performance.

Tim McGraw takes the stage to sing his newest hit, Humble and Kind. OMG! This song is the best performance of the night so far. This performance was so moving, so emotional and was such an incredibly powerful song. Towards the end of the song, people from all walks of life filled the stage area. He received a standing ovation from the audience. Wow, just WOW! Tim McGraw may just break the internet with this performance. I love the message in this song, we could all remember to be more humble and kind.

Charles Kelley of Lady Antebellum performed a solo song called Lonely Girl. I don’t know why, but I don’t like him as a solo artist. Love him with Lady A though.

Darius Rucker and Martina McBride present the award for Vocal Group to Little Big Town. However, before the presentation, they paused to honor the late Joey Feek of the country duo Joey and Rory. Darius Rucker said, “A few weeks ago, we lost a member of our country music family with the passing of Joey Feek.” Joey Feek lost her battle with cancer at the age of 40 on March 4, 2016.

Carrie Underwood takes the stage to perform her new song Church Bells. WOW, seriously she slayed it! What an amazing performance! I don’t think Underwood has ever really delivered a bad performance. She was on top of her game tonight, beautiful!

Kiefer Sutherland presents the award for Female Vocalist of the Year to Miranda Lambert. I am so happy she won! Miranda Lambert is such a talented singer, and her sound feels so unique.

Miranda Lambert, Keith Urban and ZZ Top’s Billy Gibbons are onstage to perform ZZ Top’s hit song Tush. Miranda does the majority of the vocals and totally nails it.

Nancy O’Dell present the award for Male Vocalist of the Year to Chris Stapleton. I don’t like his music at all. Totally think this should have gone to Jason Aldean.

Katy Perry takes the stage to present Dolly Parton with the Tex Ritter Award for her TV movie Coat of Many Colors. The movie stars Alyvia Alyn Lind as Dolly Parton, Jennifer Nettles as Avie Lee Parton and Ricky Schroder as Robert Lee Parton. After the award presentation, Katy and Dolly perform a medley of Parton’s songs including Jolene, Coat of Many Colors and 9 to 5. It was a great performance and well-liked by the audience.

Two more performances and the final award of the night. Florida Georgia Line sings their song Confession, followed by Chris Stapleton and his wife singing Fire Away. I love FGL but not so crazy about Stapleton.

Entertainer of the Year

Female Vocalist of the Year

New Male Vocalist of the Year

New Female Vocalist of the Year

Vocal Group of the Year

New Vocal Duo or Group of the Year

Single Record of the Year

Video of the Year

Vocal Event of the Year

Song of the Year

So what did you think of the 2016 Academy of Country Music Awards recap? Who slayed it this year? Did your fav win? I want to hear what you think in the comments!

12 thoughts on “The 2016 Academy Of Country Music Awards Recap: All Of The Big Winners”