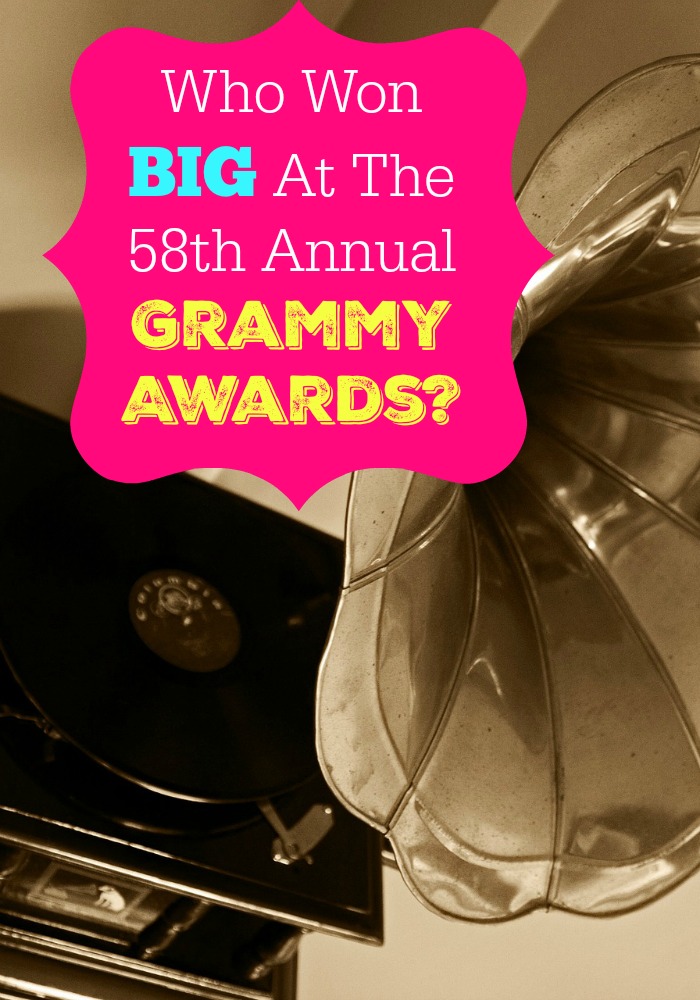 One of the most anticipated awards shows of the year for music and we have The 58th Annual Grammy Awards recap! This year’s show was held tonight at the Staples Center in Los Angeles, California. It was hosted by LL Cool J. and had both some shining moments and some surprising technical hiccups. Rihanna was scheduled to perform but seems that she has vocal issues so was advised by her doctor to cancel her performance and get some vocal rest. Too bad as I was looking forward to her performance. Also, not many of the 58th Annual Grammy awards were handed out tonight during the show, most were given before the show The show was mainly performances this year, which made for an amazing night of music. At the end of the winners  and performance highlights, I listed all the nominees and winners below for the full 58th Annual Grammy Awards recap. Ready? Let’s see the Grammys!

The show opened with Taylor Swift singing her hit song Are We Out of the Woods? I”m not a huge fan, but she’s so big right now that having her open The 58th Annual Grammy Awards makes sense. She’s up for quite a few awards this year. Not sure if I like the new hair, I really liked Taylor’s curls much better.

Ice Cube and O’Shea Jackson Jr. present the 1st award of the night for Best Rap Album to Kendrick Lamar for his album, To Pimp a Butterfly. Well deserved, but I was hoping Compton by Dr. Dre would win.

Carrie Underwood and Sam Hunt performed his song Take Your Time and her song Heartbeat. It was an amazing performance, with cool colorful background. Carrie looked beautiful as always and she sang so amazing. Sam Hunt sounded awesome, as always. But, I don’t think they do well as a duet though.

The Weeknd performs his songs Can’t Feel My Face, followed by in The Night. He received a standing ovation, although I am not sure why. I just thought his performance was sleepy, dull and boring.  I expected a little more from them. I like their song, but this is the 58th Annual Grammy Awards! Come on give me something more to write about you in the recap that’s more interesting!

Andra Day and Ellie Goulding took the stage to sing Day’s song Rise Up and Goulding’s song Love Me Like You Do. I like Ellie but Andra is a newcomer to the music industry so this is the first time I have heard her. She kinda reminds me of Rihanna.

Gary Sinise and Cam presented the award for Best Country Album to Chris Stapleton for his album, Traveller. Chris Stapleton came out of nowhere this year in the country world by taking home quite a few awards at the Country Music Awards. He seems to be continuing his sweep at the Grammys this year and is up for quite a few country music awards at the ACM’s. He is a great performer from what I’ve seen, and he’s truly stormed the coutnry world this year.

Lionel Richie Tribute time, he is Person of the Year. Well deserved, as he was one of my favorites back in the 80’s. John Legend sings Easy, Demi Lovato sings Hello, Luke Bryan takes on Penny Lover, Meghan Trainor takes on You are the Sun, You are the Rain and Tyrese takes on Brickhouse. So, let me say that I didn’t like any of these except for Lovato. She totally nailed Hello. I love Luke Bryan, but he needs to stick with country music. Lionel Richie joins them all on stage to sing All Night Long.

Little Big Town takes the stage to sing their controversial hit song, Girl Crush. I love them and love this song. If folks would just take the time to listen to the lyrics, there would be no controversy IMHO.

Well, this is a weird combination, but onstage are Stevie Wonder and Pentatonix. They perform a tribute to the Earth, Wind and Fire founder Maurice White singing That’s the Way of the World. I am impressed at how well they all sing together.

Next, they present the Song of the Year award to Ed Sheeran for Thinking Out Loud. I am surprised that Taylor Swift didn’t win this for Blank Space, but did you see Taylor absolutely lose her mind for Ed Sheeran’s win? Even more squad goals for all of us right there, especially since both Tay and Ed are competing against each other in this category.

Next tribute is to Glenn Frey. Frey was one of the lead singers of the group The Eagles, until their breakup in 1980, in which Frey embarked on a solo career. He died at the age of 67 on January 18, 2016 from complications resulting from pneumonia, acute ulcerative colitis and rheumatoid arthritis. In the tribute, Jackson Browne and The Eagles sang Take It Easy, in his memory.

Anna Kendrick is onstage to announce the next performance: Tori Kelly and James Bay. Love Tori Kelly, who sings Hollow but not sure who James Bay is exactly, who sings Let It Go. As a duet, she definitely outsang him by a long shot.

We go live to New York City with Stephen Colbert, who introduces the cast of the Broadway hit show, Hamilton. This is pretty cool Broadway show. The story is told in the form of hip hop rhymes. I would definitely pay to see this hit show.

Kendrick Lamar does a performance of his song The Blacker the Berry. This was so cool! There were people, along with Kendrick, dressed in prison outfits. Then, a black light made some cool African patterns on their outfits. There was tribal dancing and a huge bonfire. It was awesome.

Bruno Mars introduces the uber-talented Adele. OMG! I love her! She sings All I Ask. There were a few seconds of audio issues. Seriously! Audio issues, during Adele’s performance! Get it together Grammy’s! She has the most beautiful voice on the planet.

Adele responded in a way that lets us all know that hey, shit happens. It doesn’t make any of us feel better that we missed this amazing performance, and Adele was obviously upset when she took to Twitter. #allofus

The piano mics fell on to the piano strings, that’s what the guitar sound was. It made it sound out of tune. Shit happens. X

Because of it though… I’m treating myself to an in n out. So maybe it was worth it.

Kaley Cuoco introduces the next performance: Justin Bieber, Diplo and Skillrex, singing Love Yourself and Where Are You Now. So, yeah, to me this was a performance mess. Well at least on the Beibs part. Who is he trying to be? His vocals are weak, and he needs work on his dancing skills.

Sam Smith takes the stage to present the award for Best New Artist to Meghan Trainor. WHAT? She isn’t new! How do they define the word new here? She has been around a couple of years now. The other nominees, except for Sam Hunt, are new: James Bay, Tori Kelly and Courtney Barnett. They are new, not Trainor! Trainor did have quite the tearful exchange on stage. I think she hiccuped out that speech that she directed mostly to her dad.

Lady Gaga pays tribute to musician David Bowie, who died at the age of 69 on January 10, 2016, from liver cancer. WOW, she did one of the best tributes ever. She sang a compilation of his songs and dressed in some of his more popular looks, complete with the flame red hair and 70’s jumpsuit. This was my absolute fav performance at The 58th Annual Grammy Awards, and you should watch the reecap video again and again. Lady Gaga is on quite a streak of memorable performances, as she was also epic performing at the Superbowl this year.

Chris Stapleton, Bonnie Raitt and Gary Clark Jr. take the stage for a BB King Tribute. It was good, but I have seen much better tributes.

Next up onstage is Alabama Shakes, singing their hit Don’t Wanna Fight. I am not sure how these people won any award, but apparently they won a Grammy or two tonight. I think she is supposed to be a blues singer, but it’s a whole lot of screaming if you ask me. I was disappointed Elle King’s  Ex’s and Oh’s didn’t take this award.

Did you all know that Johnny Depp can play guitar and sing? Yep, he can. He and the rest of the band known as Hollywood Vampires, with Joe Perry and Alice Cooper. They performed Ace of Spades as a tribute to Lemmy Kilmister, lead singer of Motorhead, who died at the age of 70 on December 28, 2015, from cancer. Wow…. these guys are amazing. Depp can wail on that guitar.

The Grammy’s showcased their In Memoriam of all those we lost recently.

Earth Wind and Fire receive a Lifetime Achievement Award, then present the award to Album of the Year to Taylor Swift for 1989. She gave a very classy speech that also seems to be throwing shade at Kanye West indirectly. Kanye has said some pretty nasty things about Taylor recently online including that he made her into a star, and her acceptance speech while acknowledging those who helped her is also standing up for herself. Yea, woohoo, let’s move on now.

Beyonce takes the stage to present the award for Record of the Year to Mark Ronson and Bruno Mars for Uptown Funk. Beyoncé looked beautiful as always, though the real buzz is still her Superbowl performance. This is a well-deserved award though I thought this song was a bit overplayed.

The final performance of the night features Pitbull, Robin Thicke, Travis Barker and Joe Perry, to sing El Taxi and Bad Man. I love Pitbull. He is such an entertainer. This was a good performance to close out the show though they got cut off by the rolling final credits. Phew, that’s the end of our 58th Annual Grammy Awards recap. Need to see who won everything? Check out the full list below!

Best Contemporary Christian Music Album:
Jason Crabb, ‘Whatever the Road’
Lauren Daigle, ‘How Can It Be’
Matt Maher, ‘Saints and Sinners’
Tobymac, ‘This Is Not A Test’ – WINNER
Chris Tomlin, ‘Love Ran Red’

Best Song Written for Visual Media:
The Weeknd, ‘Earned It (Fifty Shades of Grey)’
Common & John Legend, ‘Glory’ – WINNER
Ellie Goulding, ‘Love Me Like You Do’
Wiz Khalifa feat. Charlie Puth, ‘See You Again’
Lady Gaga, ‘Til It Happens to You’

So what did you think of the The 58th Annual Grammy Awards recap? Who was your fav performance at the show? Tell us in the comments!