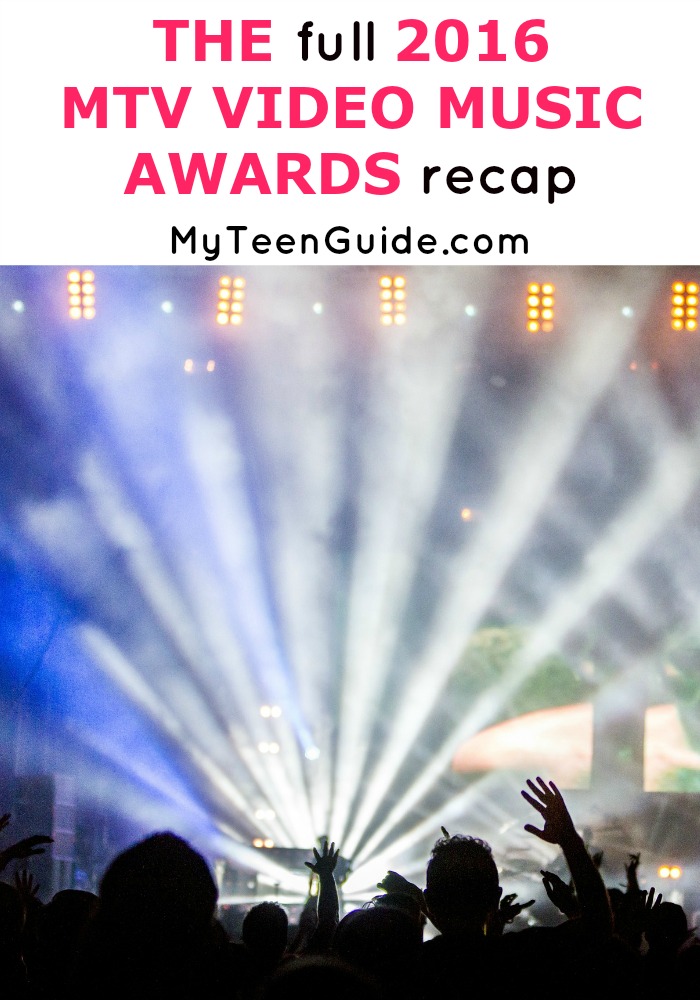 Get ready because we’ve got the full recap of the 2016 MTV Video Music Awards. So let me start off by saying that this year’s VMA awards were just weird, at least in my opinion. So, yeah the MTV VMA’s were held live tonight at Madison Square Garden in New York. The hosts are Keegan-Michael Key and Jordan Peele, with Jay Pharoah, DJ Khaled and Nicole Byer providing commentary throughout the night. I certainly hope MTV doesn’t have them back as hosts next year, or ever really because they are horrible.  They should have brought back The Rock from the MTV Movie Awards, it would have been better. At least there were some good musical performances, so let’s get on with the 2016 MTV VMA recap, all the good the bad and the weird Kanye West stories.

Rihanna opens the show with a medley of her hits including Please Don’t Stop the Music, Only Girl in the World, We Found Love and Where Have You Been. She will also perform three more times tonight. So, her performance made me want cotton candy. Seriously, she and all her dancers were dressed in cotton candy pink, and the set was all decorated in pink. With all that said, I do like Rihanna and her music and this performance showed her true talent.

Puff Daddy, or whatever it is he is calling himself these days, takes the stage to present the award for Best Hip Hop Video to Drake for Hotline Bling. I kind of expected him to win only because I didn’t know any of the other nominees. Anyways, Drake was not there to accept his award because he was stuck in traffic. I can’t make this stuff up.

Ariana Grande and Nicki Minaj take the stage to perform Side to Side. I am actually liking this performance. I was a bit unsure at first because I just couldn’t see these two performing together. Ariana is on a stationary bike, huffing and puffing, meaning she isn’t lip syncing. Nicki does her little rap stuff.

Alicia Keys presents the award for Best Male Video to Calvin Harris-featuring Rihanna- for This is What You Came For. Calvin is in the UK on tour, so he accepted by video message. Hmmm. So male video right? Can you call it a male video if a female (Rihanna) is in it?

Michael Phelps takes the stage to introduce the next performance. Remember him? He’s the Olympic swimmer. Remember earlier this month there was a meme of him making a mean face at his rival Chad le Clos? Well, if you don’t you can see it below. Anyways, Michael tells the audience and Future that he was listening to Future’s song Stick Talk when the infamous photo was snapped. So, Future performs his newest hit Commas.

So, MTV’s producers decided to give Kanye West four minutes onstage to sing, talk, whatever he wanted. This is going to be a huge mistake; I can see it already. Kayne takes the stage, says he is going to present his new video but first he is going to talk. OMG! So first he mumbles about how he won’t be upset if Beyoncé doesn’t win tonight. (Yes, referring to the Taylor Swift incident a few years back) Then he points out Amber Rose in the audience and then starts some rant about Chicago and murder and finally some mumbo jumbo about his role models are Steve Jobs and Walt Disney. What in the world was MTV thinking? We got to see his new video Fade though.

Next, Rita Ora and Ansel Elgort take the stage to introduce the next performance: Nick Jonas and Ty Dolla $ign performing Bacon. Nick is in a diner, and his brother Joe is there too so I am pretty sure this isn’t live. Outside of the diner is Ty Dolla $ign doing his rap thing. Then, everyone is onstage outside of Madison Square Garden to finish up the song.

Serena Williams introduces Beyoncé, who performs a medley of songs from her album Lemonade, including Pray You Catch Me, Hold Up, Sorry, Don’t Hurt Yourself and Formation. Her performance included white fur, a smoke machine and a ring of fire. Hands down, this was the best performance of the night. She is such an amazing performer.

Shameik Moore and Jaden Smith are onstage to present the Best Collaboration Video to Fifth Harmony featuring Ty Dolla $ign. They totally deserved this. Such a talented group of ladies.

Kim Kardashian takes the stage to introduce the next performance: Britney Spears. WOW! I haven’t seen Britney on the VMA’s for like 10 years or so. She and G-Eazy sing her newest song Make Me. Remember the last time she was on the VMA’s and did that horrible lip syncing? Yup, she did it again.

Four of the Olympic gymnasts are onstage. Gabby Douglas was supposed to be there as well but she just got out of the hospital for some medical issue. The four that were onstage were Simone Biles, Laurie Hernandez, Madison Kocian and Aly Raisman. They present the award for Best Female Video to Beyoncé for Hold Up.

Okay, I didn’t mind the first time Rihanna came out and performed. I didn’t mind the second time either but this is overkill. This time around, Rihanna performs Need Me (with a bunch of bleeping), Pour it Up and Bitch Better Have My Money. Hopefully we are done with Rihanna for the night.

Fifth Harmony takes the stage to present the award for Best New Artist to DNCE. I am sure you have heard Cake by the Ocean on the radio a million times by now.

The next performance is The Chainsmokers and Halsey singing Closer. It was a pretty awful performance. I don’t think any of them can carry a tune.

Jimmy Fallon appears onstage dressed as Ryan Lochte. I am sure everyone has heard of him by now, the jerk swimmer who damaged some property and faked being robbed then jumped on a plane back to the US? I love Jimmy Fallon. He is such a riot! Anyways, he presents the award for Video of the Year to Beyoncé for Formation.

And just when I thought we were done with Rihanna. Nope. Mary J. Blige introduces Rihanna as the winner of the Michael Jackson Video Vanguard Award. And Rihanna closes out the show with another round of medley hits including Stay, Diamonds and Love on the Brain.

Video of the Year:

Calvin Harris ft. Rihanna – “This Is What You Came For”- WINNER!

Calvin Harris ft. Rihanna – “This Is What You Came For”

All Time Low – “Missing You”

Coldplay – “Adventure of A Lifetime”

Panic! At The Disco – “Victorious”

Calvin Harris & Disciples – “How Deep Is Your Love”- WINNER!

Mike Posner – “I Took a Pill in Ibiza”

The Chainsmokers ft. Daya – “Don’t Let Me Down”

Florence + The Machine – The Odyssey

Calvin Harris featuring Rihanna – “This Is What You Came for”

Fifth Harmony featuring Fetty Wap- “All in My Head”- WINNER!

Missy Elliott ft. Pharrell – “WTF (Where They from)”

Tame Impala – “The Less I Know the Better”

So what did you think of this year’s 2016 VMA’s? Did we have enough Rihanna? What the heck were they thinking letting Kanye up on the mic to ramble on? Tell me what you think in the comments.