All the Big Winners & Highlights from the 2016 MTV Movie Awards 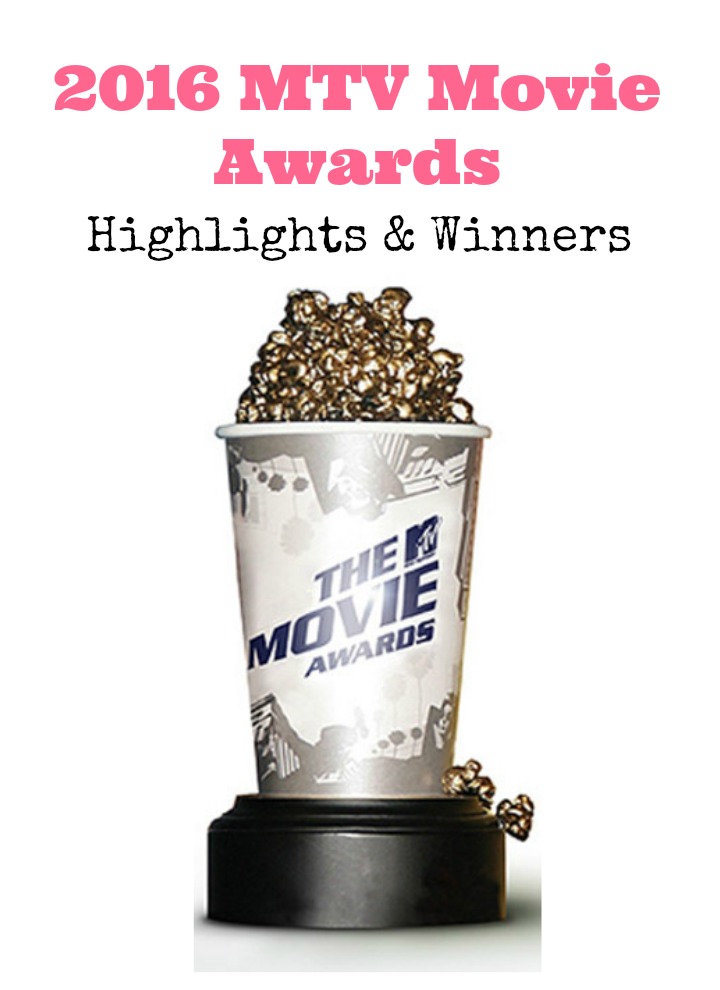 Related: Here Is Every Movie Nominated For The 2016 MTV Movie Awards

The Rock and Kevin Hart, from the upcoming movie Central Intelligence, hosted the award show, opening the show with a comedic act about the movies nominated. The Rock told a few short jokes, referring to Hart and Hart shot back calling The Rock the “Chocolate Shrek.”

Miles Teller presents the award for Best Female Performance to Charlize Theron for her role as Imperator Furiosa in Mad Max: Fury Road.

Kenan Thompson and Kel Mitchell present the award for Best Virtual Performance to Amy Poehler for her voice role of Joy in Inside Out. During her speech, she said, “This show is already really dirty so I’m going to keep it PG because I want to keep my stuff in the broadcast.”

Chris Hemsworth, Charlize Theron and Jessica Chastain introduce the first of two performances: Halsey, singing her song Castle, from the soundtrack for the movie The Huntsman: Winter’s War. What an amazing performance. Halsey looked stunning in her bodysuit and white cape.

From the upcoming movie Now You See Me 2, Jesse Eisenberg, Lizzy Caplan and Woody Harrelson present the award for Best Action Performance to Chris Pratt for his role of Owen Grady in Jurassic World.

Common takes the stage to introduce The Rock and Kevin Hart, who perform a rather inappropriate rap number, mainly dealing with Leonardo DiCaprio and a bear.

Kendrick Lamar presented the award for True Story to the cast of Straight Outta Compton.

From the upcoming movie Neighbors 2, Seth Rogen and Zac Efron present the award for Best Comedic Performance to Ryan Reynolds for his role as Wade Wilson/Deadpool in the movie Deadpool.

A medley of stars introduced Will Smith, presenting him with the MTV Generation Award. Andy Samberg and The Lonely Island perform a funny musical tribute to Will Smith that included some of this hit songs, Summertime, The Fresh Prince of Bel-Air and Men in Black. Queen Latifah said about Smith, “We came up together in hip hop. This is the guy who helped me get my start.” Next, Halle Berry said about Smith, “We love every single thing about you.” During his acceptance speech, Smith said, “When I first heard that MTV wanted to give me the Generation Award, I thought that was, like, code for the old ass dude award.”

Anna Kendrick, Zac Efron and Adam DeVine present the award for Breakthrough Performance to Daisy Ridley, for her role as Rey in Star Wars: The Force Awakens. During her speech, Ridley said, “It feels especially amazing to be part of a film that represents all genders, all races and all ages in a positive way.”

From Arrow and the upcoming Teenage Mutant Ninja Turtles, Stephen Amell, presents the award for Best Kiss to Rebel Wilson, for her role as Patricia “Fat Amy” and Adam DeVine, for his role as Bumper Allen, in the movie Pitch Perfect 2.

The cast from the upcoming movie Suicide Squad: Will Smith, Margot Robbie, Cara Delevingne and Jared Leto, showcase an exclusive clip for the Suicide Squad movie.

Melissa McCarthy is presented with the Comedic Genius Award.

From the upcoming movie Me Before You, Emilia Clarke and Andy Samberg, present the award for Best Fight to Ryan Reynolds, in his role as Deadpol and Ed Skrein, for his role as Ajax, in the movie Deadpool.

Eddie Redmayne presents an exclusive clip from his upcoming movie Fantastic Beasts and Where to Find Them.

In the final award presentation of the night, from the upcoming movie Legends of Tarzan, Samuel L. Jackson and Alexander Skarsgard, presented the award for Movie of the Year to the cast of Star Wars: The Force Awakens. Director, J.J. Abrams said in his speech, “It was an incredible honor to be part of the Star Wars saga and for the film to receive this award voted by you, the fans, is incredibly gratifying.”

Here are all the award nominees and winners of the 2016 MTV Movie Awards!

Check out all the award nominees and winners, along with our original predictions. How did we do?

Movie of the Year
–Avengers: Age of Ultron- I am a HUGE Iron Man and Robert Downey Jr fan so this is definitely my personal favorite to win.
–Creed
–Deadpool
–Jurassic World
–Star Wars: The Force Awakens– While I love the Avengers, Star Wars did big at the box office, so this will probably win. WINNER
–Straight Outta Compton

Documentary
–Amy- Honestly, I have never heard of any of the documentaries except Amy, which is the true story of Amy Winehouse. WINNER
–Cartel Land
–He Named Me Malala
–The Hunting Ground
–The Wolfpack
–What Happened, Miss Simone?

Best Comedic Performance
-Amy Schumer, Trainwreck
-Kevin Hart, Ride Along 2
-Melissa McCarthy, Spy
-Rebel Wilson, Pitch Perfect 2
-Ryan Reynolds, Deadpool- Again, I am not a huge fan of any of these nominees but if I had to pick, Ryan Reynolds would be my choice. WINNER
-Will Ferrell, Get Hard

Best Action Performance
-Chris Pratt, Jurassic World- WINNER
-Dwayne Johnson, San Andreas- Yeah, so this was a tough choice between Dwayne or Vin Diesel. Both great performances but have to do with Dwayne on this one.
-Jennifer Lawrence, The Hunger Games: Mockingjay — Part 2
-John Boyega, Star Wars: The Force Awakens
-Ryan Reynolds, Deadpool
-Vin Diesel, Furious 7

Ensemble Cast
–Avengers: Age of Ultron
–Furious 7- The cast has been together through 7 movies and was the last one Paul Walker was in.
–Pitch Perfect 2- WINNER
–Star Wars: The Force Awakens
–The Hunger Games: Mockingjay — Part 2
–Trainwreck

Did any of your favorites win during the 2016 MTV Movie Awards? Tell us in the comments