Love the feeling of goosebumps running down your spine? Check out 5 creep The Dark Tower movie quotes that will totally give you chills! 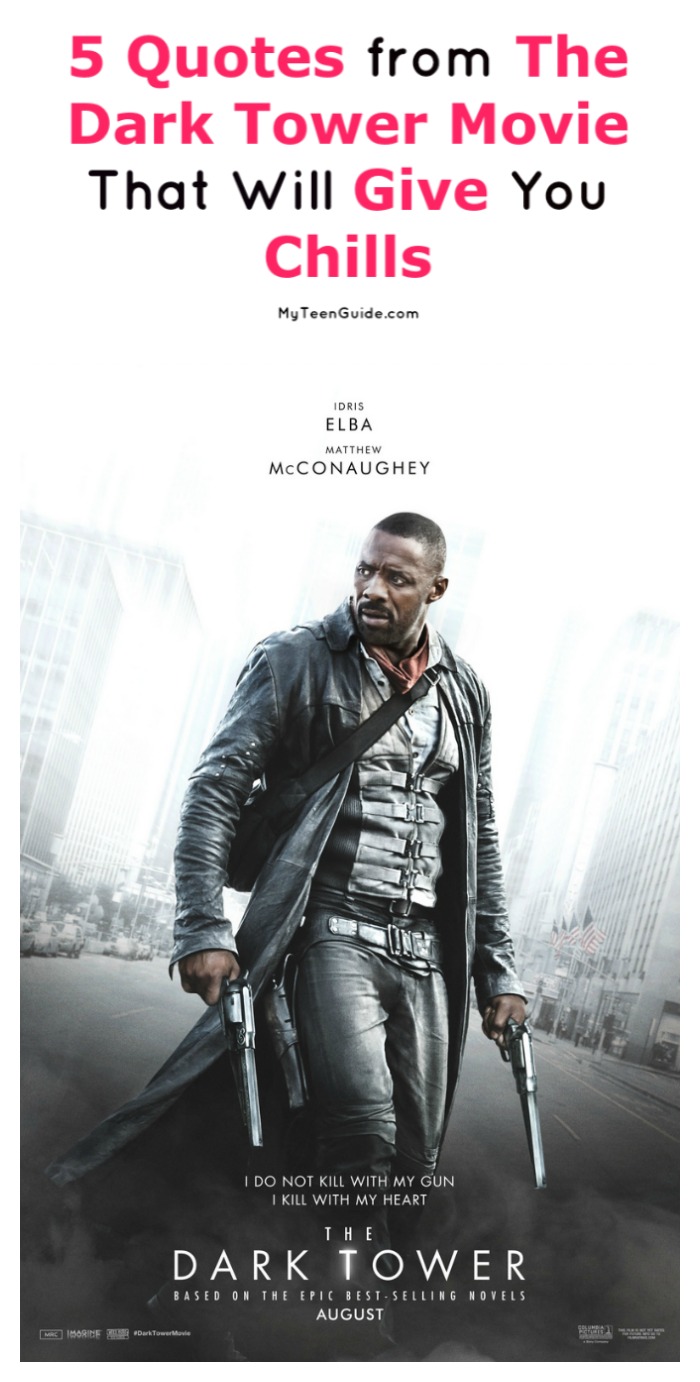 The Dark Tower, as we mentioned in our trivia post the other day, is an upcoming movie inspired by the Stephen King book series by the same name. It’s a real genre mashup, combining sci-fi, fantasy, western, action and horror into one crazy ride. The series is one of King’s most popular and critically acclaimed, so it will be interesting to see how the movie captures that! Here are some The Dark Tower movie quotes that gave me chills!

1- Roland Deschain/The Gunslinger, as a voiceover in the opening of the movie trailer:

Roland- “For thousands of generations, the Gunslingers were knights, sworn to protect us from the coming of the dark.”

The role of Roland Deschain/The Gunslinger is played by actor Idris Elba. Roland is the last descendant of gunslingers and is immortal.

2- Conversation between Doctor Hotchkiss and Jake Chambers, right before the ground starts shaking:

Dr. Hotchkiss- “These visions, as you call them, what do you see?”

Jake- “I see a tower, the Man in Black and the Gunslinger.”

Dr. Hotchkiss, played by actor Jose Zuniga, is a counselor at Jake’s middle school. Jake, played by actor Tom Taylor, is a young boy from New York City, who has visions of another dimension.

Jake- “Why does the Man in Black want to destroy the tower?”

Roland- “The tower protects both our worlds. If it falls, Hell will be unleashed.”

Jake, who is from Earth, portals to another world, known as Mid-World, where Roland is on a journey to find the Dark Tower.

4- Conversation between Jake Chambers and Roland Deschain/The Gunslinger, referring to the Man in Black:

The Man in Black, played by Matthew McConaughey, is the movie’s main antagonist. He is a demonic sorcerer, who wants to rule the Dark Tower.

5- Roland Deschain/The Gunslinger, as a voiceover in the closing of the movie trailer:

Chilling, right? Especially the one about the Man in Black being worse than the devil! If you’re going to see this one in theaters (I definitely plan to!), make sure you sign up for a Fandango Fanalert so you can grab your tickets before you go!

Do you have any favorite The Dark Tower movie quotes? How about quotes from the book? Share below!