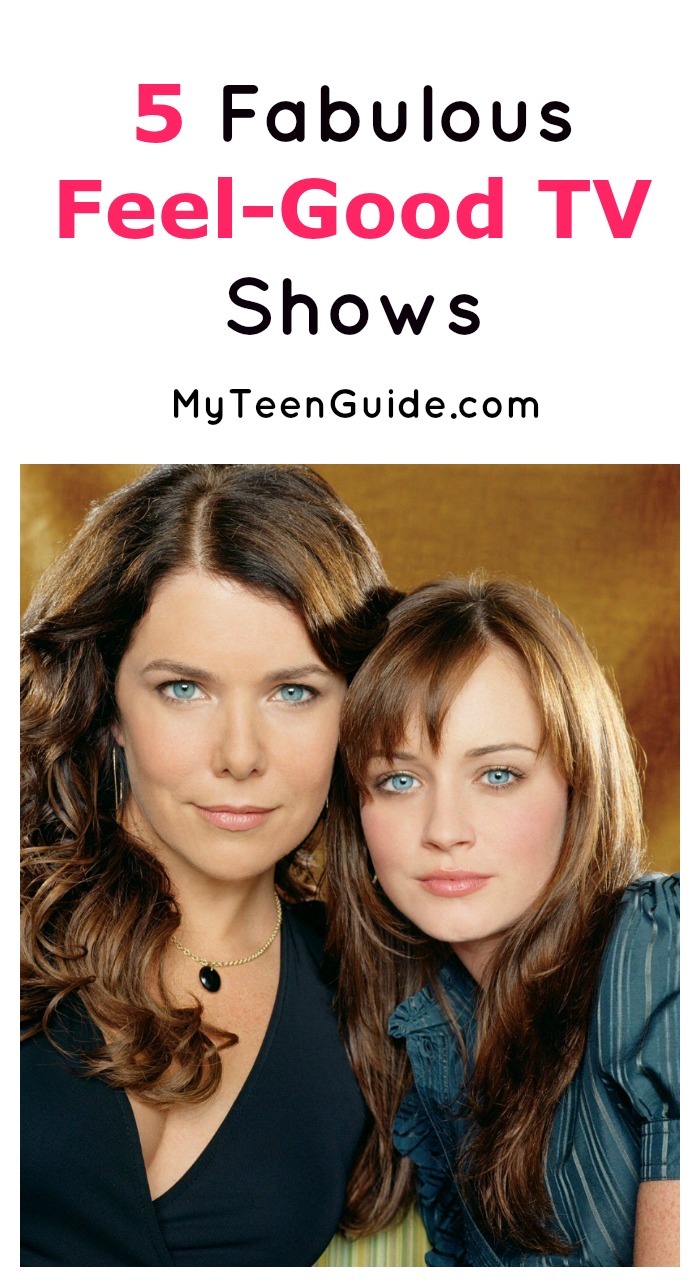 Looking for a few feel good tv shows to watch when you’re feeling blue? I know the feeling! Some shows automatically make you feel better, regardless of the mood you were in when you started watching them. Am I right? This type of show typically whisks you away to a happier place and makes you forget your troubles… at least for a little while. Here are five of them to consider.

Related: The Best Comedy Movies On Netflix That You Will Never Want To Shut Off

Gilmore Girls premiered way back in October 2000. The series’ seven-season run produced more than 150 episodes. There was talk of a revival for years. And, in November 2016, it finally happened. Yay! Netflix aired a four-part miniseries. To say that millions of fans were overjoyed is a definite understatement.

The show revolves around mother and daughter, Lorelai and Rory who live in Stars Hollow, Connecticut. It explores many important issues, including family, friendship and social topics. Music is also a very big aspect of Gilmore Girls. Once you start to watch the show, you’ll see that the topic comes up frequently.

Cedar Cove, which aired on the Hallmark Channel from July 2013 to September 2015, was the network’s first original scripted series. Based on books by popular author Debbie Macomber, the show gets you involved with the life of Olivia Lockhart who happens to be the town’s favorite judge.

There is, however, at least one major deviation from the books. The network decided to make the change because the powers-that-be felt that the original storyline was “too heavy.” In the books, Olivia’s best friend’s husband commits suicide. In this series, her best friend gets a divorce.

If you enjoy historical dramas and keeping up with aristocrats, you’ll probably love Downtown Abbey. The timeframe of the series is set between 1912 and 1925. The place is Downtown Abbey, a fictional country estate and home to the Crawley family.

This super-popular show won many awards. It even won a Guinness world record. Downtown Abbey aired from September 2010 until Christmas Day 2015. It holds the distinction of being the most-watched TV series on PBS. To be as authentic as possible,  the producer hired an expert on rituals, both state and court related.

Firefly is a space western starring Nathan Fillion. You’ll meet the nine-member crew of the Serenity, a “firefly-class” spaceship. The year is 2517. The group just lost a civil war and everyone onboard is considered to be a renegade.

Unfortunately, to the horror of die-hard fans, the series only lasted one season. However, because each episode averaged almost 5 million viewers, Firefly was released on DVD shortly thereafter.  Why not tune in and watch the crew help save the central federal government, otherwise known as the Alliance. They really know how to save the day… sort of! After you finish off the series, watch the movie Serenity to see how it all ends.

The comedy Ugly Betty debuted in 2006 on ABC. It lasted for four seasons, airing a total of 85 episodes. Starring America Ferrera as Betty Suarez, the series follows the personal life and fashion career of a young woman who at first knows little about fashion. But, she’s both wise and has a heart of gold. So, it doesn’t take her long to find her true inner beauty and take the fashion world by storm.

These are five feel-good TV shows that-make it easier to see the good in the world and leave your troubles behind… at least while you’re watching them. The next time boredom strikes, pick one and prepare to binge watch. I can almost guarantee you won’t regret it!

Do you have any favorite feel good TV shows? Share in the comments!