Looking for the perfect Netflix movies for tween girls birthday parties? We’ve got you covered? These 10 flicks are the perfect slumber party movies to watch. Let’s check them out! 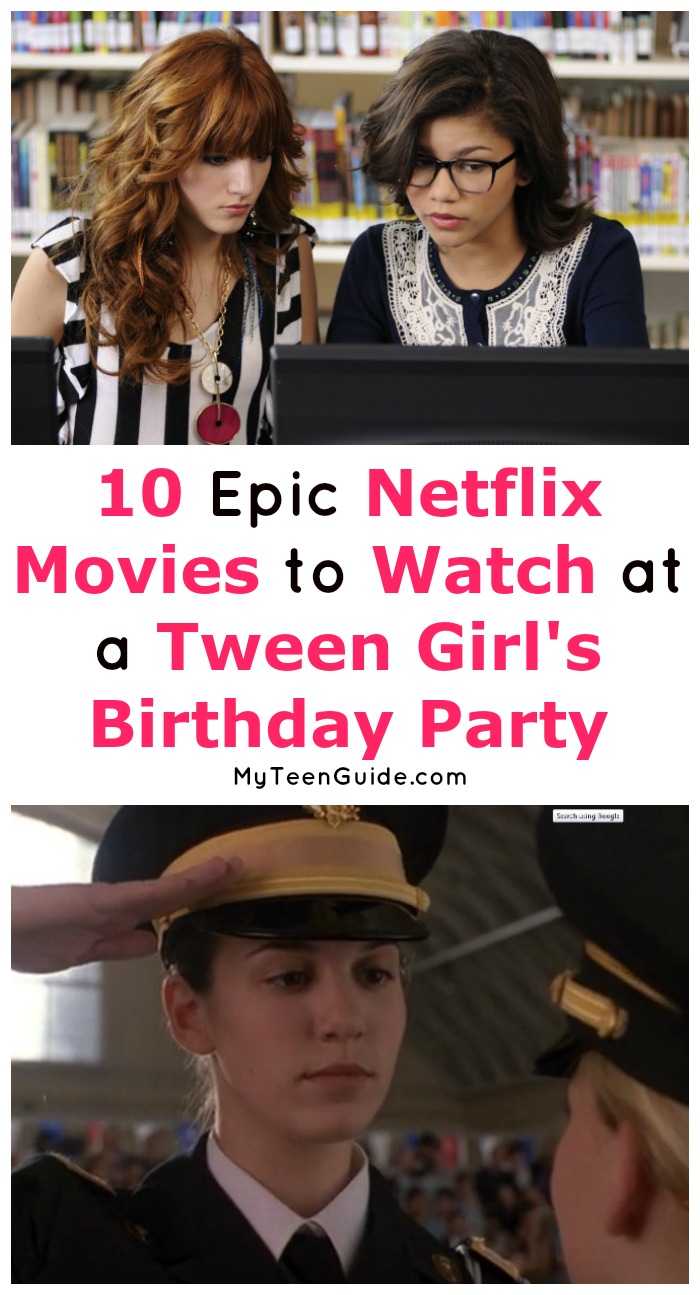 There are very few things more exciting than having a movie party with your best friends. Some movies are just more fun to watch together, don’t you think? If you’re planning an all-nighter, add a bunch of these to your streaming list. Just hosting a shorter bash? No worries! Let everyone vote on their favorite, or throw all of these movie ideas into a hat and let fate decide which one to watch.  Here are our picks for the best Netflix movies for tween girls parties!

Cadet Kelly is a 2002 family, comedy drama movie. The movie stars Hilary Duff as Kelly Collins, a fashion-loving teenager, is not happy when her mom marries the uptight Commander of the George Washington Military Academy. As if moving from the Village to upstate New York isn’t bad enough, her new dad enrolls her in his military school! Kelly soon finds out that she’s in way over her head and has a lot to learn if she’s going to succeed as a cadet!

The Cheetah Girls is a 2003 family, comedy, drama movie that is based on the novel series, of the same name, by Deborah Gregory. It is the prequel to the 2006- The Cheetah Girls 2 and the 2008- The Cheetah Girls: One World. Four teen girls from Manhattan, New York- Aquanetta (Aqua) Walker, Chanel (Chuchie) Simmons, Dorinda (Do) Thomas and Galleria (Bubbles) Garibaldi- have dreams of music stardom. The movie stars Kiely Williams, Adrienne Bailon, Sabrina Bryan and Raven-Symone.

A Cinderella Story is a 2004 family, comedy, romance movie that is a modern take on the classic Cinderella folklore. Samantha (Sam) Morgan and her online pen pal, Austin Ames, make plans to meet in person at the upcoming high school homecoming dance. The movie stars Hilary Duff and Chad Michael Murray.

One of our favorite Netflix movies for tween girls birthday parties, High School Musical is a 2006 family, comedy, drama, musical movie that is the prequel to the 2007- High School Musical 2 and the 2008- High School Musical 3: Senior Year.  Troy Bolton, a high school jock and Gabriella Montez, a shy but smart student, discover they both have a love of music and try out for the lead roles in their high school’s musical, much to the dismay of Sharpay Evans, a diva and Ryan Evans, her twin brother. The movie stars Zac Efron, Vanessa Hudgens, Ashley Tisdale and Lucas Grabeel.

Penelope is a 2006 family, comedy, fantasy, romance movie. Penelope Wilhern, an aristocratic heiress who was born with a curse (the face of a pig), which can only be broken when she finds a true love that will accept her as their own. The movie stars Christina Ricci and teaches a lot about inner beauty and acceptance.

Nancy Drew is a 2007 family, comedy, crime, mystery movie that is loosely based on the novel series, of the same name, by Edward Stratemeyer. Nancy Drew and her father, Carson Drew, move into a new home, the former home of a murdered movie star. Nancy soon begins sleuthing for clues surrounding the movie star’s unsolved, mysterious death. The movie stars Emma Roberts and Tate Donovan.

Camp Rock is a 2008 family, comedy, musical movie that is the prequel to the 2010- Camp Rock 2: The Final Jam. Shane Gray is the popular lead singer of the musical trio, Connect 3, with his brothers- Nate Gray and Jason Gray. On the first day of camp at Camp Rock, a music camp, Shane hears someone singing with a beautiful voice (who turns out to be Mitchie Torres) and sets out to find the girl behind the voice. The movie stars Joe Jonas, Nick Jonas, Kevin Jonas and Demi Lovato.

Minor Details is a 2009 family, adventure, mystery movie. At a prestigious boarding school, four students- Abby, Claire, Paige and Taylor- team up to investigate why students are getting sick for no reason. The movie stars Kelsey Edwards, Danielle Chuchran, Caitlin Meyer and Lauren Faber.

Lemonade Mouth is a 2011 family, comedy, drama, musical movie that is based on the 2007 book, of the same name, by Mark Peter Hughes. Five high school students- Charlie, Mo, Olivia, Stella and Wen- meet in detention and decide to start a band together. The movie stars Blake Michael, Naomi Scott, Bridgit Mendler, Hayley Kiyoko and Adam Hicks.

Frenemies is a 2012 family, comedy, drama movie that is based on the 2008 book, of the same name, by Alexa Young. The movie follows the intertwined stories of a trio of teen friends- Jake & Murray (his dog), Avalon & Halley and Savannah & Emma, as their friendships go back and forth from friends to enemies. The movie stars Nick Robinson, Bella Thorne, Zendaya and Mary Mouser.

These are just a few of our favorite Netflix movies for tween girls birthday parties! There are so many fun options that you can go with at your bash. Just make sure to choose movies that everyone will enjoy and you’ll be good to go!

What are some of your favorite Netflix movies to watch at a tween girl birthday party? Share below!