We’ve got you covered! These 17 crime shows will keep you busy for months!

They’ve got it all: comedy, drama, mystery, even romance!

Plus, we’ll also give you the inside scoop on the cast of White Collar and everything you need to know about the 6th season!

Let’s check it out! 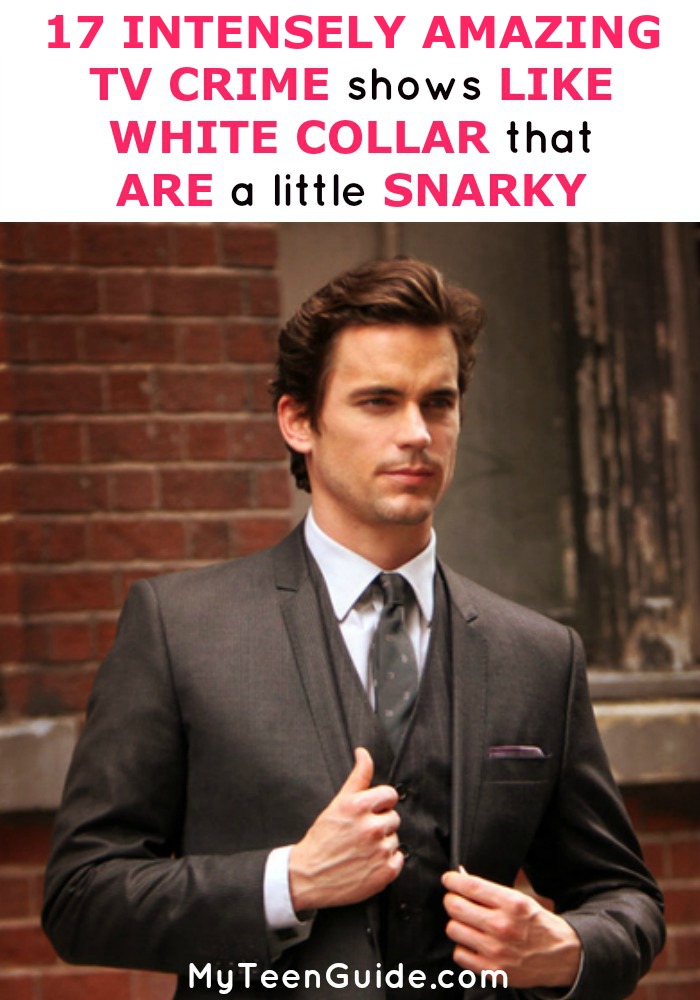 Love Billions? Check these ►5 TV Shows Like Billions You Need to Be Watching Now

White Collar is a police procedural, drama television series that aired on USA for 6 seasons, from October 23, 2009 to December 18, 2014.

White Collar focuses on the testy and unconventional partnership and relationship between Neal Caffrey, a con artist and white-collar criminal and Peter Burke, an FBI Special Agent.

After Neal breaks out of a maximum-security prison to find his girlfriend, Kate Moreau, he is found and captured by Peter.

Neal proposes a deal to Peter- instead of being sent back to prison, Neal becomes an FBI Consultant to help Peter catch dangerous white-collar criminals. And that’s where it all begins!

Neal Caffrey is a former fugitive and thief and current FBI Consultant. He is brilliant, charismatic, charming, deceiving and handsome.

The role of Neal Caffrey is played by actor Matt Bomer.

It's the con to end all cons. Don't miss the Series Finale of White Collar "Au Revoir" tomorrow at 9/8c.

The role of Peter Burke is played by actor Tim DeKay.

Mozzie is Neal’s ally, confidant and close friend. His real name is Theodore Winters, which isn’t discovered until season 5 and he has deep connections in the criminal underworld.

The role of Mozzie is played by actor Willie Garson.

Garson played by recurring role of Stanford Blatch in the romantic comedy, drama television series- Sex and the City.

Mozzie learns that not all is fair in cons and war.Don't miss the next episode of White Collar "All's Fair" this Thursday at 9/8c.

Elizabeth Burke is the beautiful, devoted and sophisticated wife of Peter. She runs her own business- Burke Premiere Events, an event planning company.

The role of Elizabeth Burke is played by actress Tiffani Thiessen.

Does she look familiar to you? You may recognize Thiessen from her main role as Kelly Kapowski in the television sitcom- Saved by the Bell.

Too early for you? Okay, how about as the main role of Valerie Malone in the teen drama television series- Beverly Hills, 90210?

Will Elizabeth's news change her relationship with Peter? Don't miss the next episode of White Collar "Uncontrolled Variables" tomorrow at 9/8c.

Diana Berrigan is an FBI Special Agent, working in the White-Collar Crimes Unit, who is known to be dedicated and extremely smart.

The role of Diana Berrigan is played by actress Marsha Thomason.

Diana and the FBI may have planted the mole, but will the Pink Panthers win the game? Don't miss the next episode of #WhiteCollar, "Whack-A-Mole," tomorrow at 9/8c.

Check out our episode guide for the final season!

Neal tries to strike a deal with the FBI to ensure his freedom once and for all.

The FBI agrees to grant Neal his freedom. But, first, Neal must bring down an exclusive group of thieves known as The Pink Panthers.

Peter works with an Interpol Agent, whose reckless behavior threatens to put their operation in jeopardy.

Peter works with an Interpol Agent, whose reckless behavior threatens to put their operation in jeopardy.

The Pink Panthers as Neal, on extremely short notice, to put together a deceitful operation.

Peter puts himself in danger so that he can assist Neal with a risky heist.

Now that you know all about White Collar season 6, let’s check out more shows you’ll love!

Head up! I’ve noted which of the TV Shows Like White Collar you’ll find on Netflix, Amazon Prime, or Hulu to make it easier for you.

Just keep in mind that shows switch to different streaming providers all the time. Shows on Netflix today may be on Hulu tomorrow.

Many networks are going with their own streaming services now and never releasing the shows to the “big three.”

Okay, enough about that, let’s check out the shows like White Collar, shall we?

Burn Notice was one of the top TV shows like White Collar on Netflix for a while, people seemed to be talking about it a lot!

After he was kidnapped, beaten and burned in a Nigeria failed operation, he discovers that if he leaves his hometown of Miami, Florida, someone in a position of power wants him dead.

The Blacklist is a crime thriller television series that has aired on NBC for 5 seasons so far, premiering on September 23, 2013.

Reddington has eluded capture for several decades, but is willing to turn himself in, with the condition that he only work with Keen.

This is one of the absolute best shows on television! James Spader is such an amazing actor and brings so much to the series!

You can find this one on Netflix!

Sherlock is a crime drama television series that has aired on PBS for 4 seasons so far, premiering on July 25, 2010.

The series is based on the Sherlock Homes detective stories by Sir Arthur Conan Doyle.

I love anything with Sherlock Holmes, so of course, I love this television series.

Find it on Netflix.

Psych is a top detective comedy and one of my fav drama TV shows to watch more than once!

I absolutely love Corbin Bernsen. If his name sounds familiar, you may remember him in the lead role of Arnie Becker, on the NBC television series, L.A. Law.

The series showcases Shawn Spencer, a Santa Barbara Police Department Crime Consultant, who has everyone believing that he uses his psychic powers to solve crimes, when the truth is, it is nothing more than his great detective skills and amazing observational skills.

This one isn’t on Netflix, but it is included with your Amazon Prime membership.

The series chronicles the adventures of 5 team members, Parker, a thief; Alec Hardison, a hacker; Eliot Spencer, a retrieval specialist; Sophie Devereaux, a grafter and Nathan Ford, an insurance specialist, as they utilize their skills to help everyday citizens deal with injustices from wealthy and corrupt businessmen.

You really need to binge watch this show because it is totally amazing! It’s one of the TV shows like White Collar that really brings it all: comedy, action, intrigue, and even a little romance.

Season 1 is included with your Prime membership.

This show is kind of a cross between White Collar and Orange Is the New Black, in my opinion.

Find this one on Netflix.

The series centers on Annie Walker, a CIA trainee working as a Field Agent, alongside August Anderson, a blind tech operative.

Covert Affairs stars Piper Perabo and Christopher Gorham, and the entire series is included with your Prime membership.

I was a huge fan of this show and still like to re-watch the series every now and then!

Remember the popular NBC television series, Saved by the Bell, in the late 80’s? Well, the guy who plays Peter Bash, Mark-Paul Gosselaar, played the main role of Zack Morris on the show.

Franklin & Bash centers around Jared Franklin and Peter Bash, who are not only lifelong friends, but also a pair of unconventional lawyers working at the same law firm.

Besides Gosselaar, the series also stars Breckin Meyer. Unfortunately, this is one of the few TV shows like White Collar that isn’t streaming for free on one of the big three.

TNT does have an app that lets you watch full episodes, though.

The series focuses on Mary Shannon, who works for the U.S. Marshals, while trying to also deal with her family and personal lives.

In Plain Sight stars Mary McCormack. I really enjoyed watching this show and was sad when it ended.

I liked the fact that it showed not only the professional side of the main character, but also her personal life too.

This is another one that isn’t streaming on Netflix, Hulu, or Amazon.

However, you can watch it through the USA website or their app.

The series follows Kate Reed, who works as an attorney at her father’s law firm, but later becomes a mediator.

Watch it on the USA website or their app.

Chuck stars Zachary Levi. If you’re looking for comedic TV shows like White Collar, this is the one to start with!

Suits is a legal drama television series that has aired on USA for 7 seasons so far, premiering on June 23, 2011.

The series chronicles Mike Ross, a talented lawyer who never stepped foot inside a law school, working for Harvey Specter, one of New York’s top lawyers.

Suits stars Patrick J. Adams and Gabriel Macht. This show is funny and serious, all at the same time.

I love how they work together, to keep Ross’ secret (he never went to law school) from becoming public knowledge.

Suits is included with your Prime Membership.

This was one of my all-time favorite crime shows, especially because of the main actor, Simon Baker.

I fell in love with his acting, when he starred in the 2006 movie, The Devil Wears Prada, as Christian Thompson.

The series revolves around Patrick Jane, who works as a consultant with the California Bureau of Investigation, helping to solve murders, using his skills that he obtained, as a former, fraudulent psychic medium.

CBS shows are the hardest to find streaming on the big three. You’ll need CBS All Access to watch this one.

Human Target is an action, drama, adventure television series that aired on FOX for 2 seasons, from January 15, 2010 to February 9, 2011.

The series centers on Christopher Chance, a unique bodyguard, who protects his clients by totally integrating himself into their lives.

Watch full episodes on the FOX website or through their app.

The series centers around Harold Finch, a wealthy computer programmer, who creates a program for the government, which provides them with the identities of criminals and victims of cases, but not the details of the actual crimes.

If you were a fan of the ABC television series, Lost, you will surely recognize Michael Emerson, because he played the role of Ben Linus, the leader of The Others, on the show.

This one is streaming on Netflix now!

Elementary is a crime drama television series that has aired on CBS for 5 seasons so far, premiering on September 27, 2012.

It focuses on Sherlock Holmes, a former consultant at Scotland Yard, now living in New York City, employed as a police consultant, working with Dr. Joan Watson, a former surgeon.

Find this one on HULU.

If you are looking to continue your fix of David Boreanaz, you can currently find him on the CBS military drama Seal Team, in the lead role of Jason Hayes.

This isn’t just my favorite of the TV shows like White Collar, it’s also one of my all-time favorites of any show!

The entire series is available on HULU.

These TV shows like White Collar should keep you in binge mode for a long time!

Bones alone will keep you busy for months (or weeks, if you binge like I do).

Many of the other shows on the list have at least 5 seasons, so you won’t run out of entertainment any time soon.