Looking for more killer TV shows like Dexter? We’ve got you covered! These 15 shows will totally creep you out! Check them out! 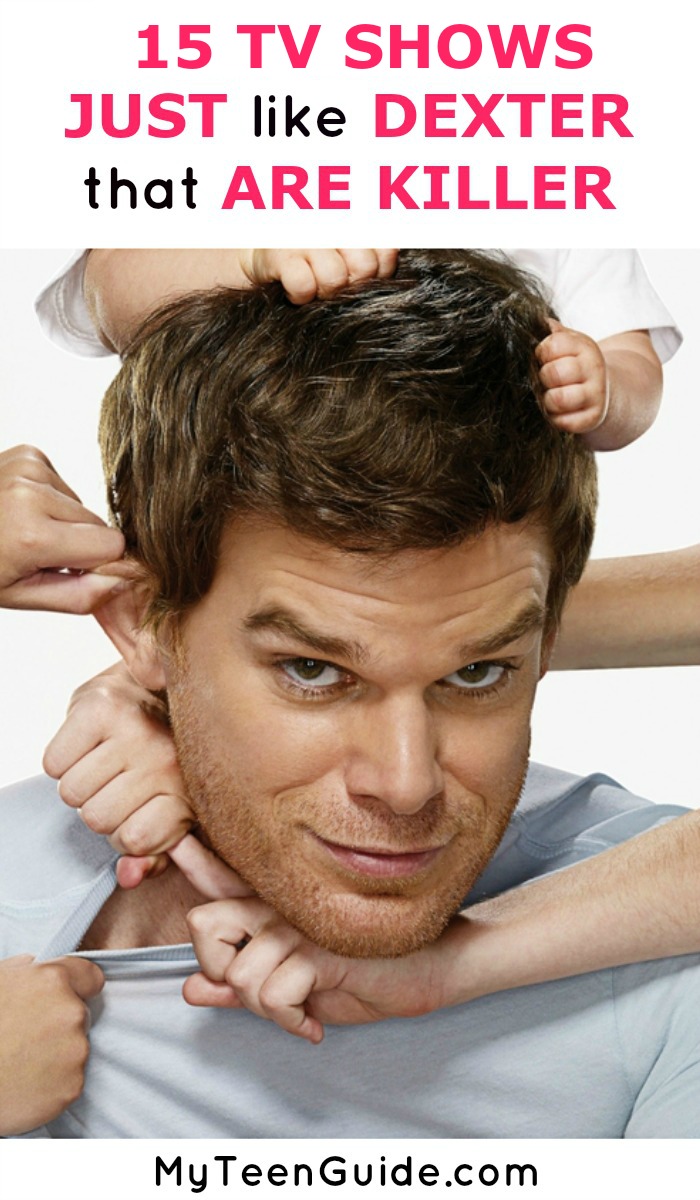 The minds of psychopaths can be fascinating, which is why I’ve been on the lookout for more TV shows like Dexter ever since I finished it! I don’t know what it is about these types of shows that draws me in. I think I just find it intriguing to try to figure out what makes serial killers tick. I know I’m not alone, since these types of shows are so popular!  If you’ve been looking for something to fill that space Dexter left empty, here are similar shows to watch next!

Dexter is a crime, drama and mystery television series that aired on Showtime for 8 seasons, from October 1, 2006 to September 22, 2013. The series chronicles the life of Dexter Morgan, who is a forensic technician by day and a serial killer by night, hunting hardcore criminals that have slipped through the justice system. Dexter stars Michael C. Hall. Here are some TV shows like Dexter.

I’ve noted for you which of these TV Shows Like Dexter are on Netflix! Just keep in mind that the Netflix lineup changes constantly. For the few shows that aren’t on Netflix, check Amazon Prime Video or Hulu first. If you can’t find it on those streaming networks, then head to the show’s network website. Just about every major network has an app now that lets you watch full episodes.

Hannibal is a psychological, thriller and horror television series that aired on NBC for 3 seasons, from April 4, 2013 to August 29, 2015. It is based on certain characters and elements from the 1981 book Red Dragon and the 1999 book Hannibal, both by Thomas Harris. The series focuses on the early relationship between Will Graham, an FBI special investigator and Dr. Hannibal Lecter, a forensic psychiatrist and cannibalistic serial killer. Hannibal stars Hugh Dancy and Mads Mikkelsen. Mikkelsen appeared in Rihanna’s 2015 music video- Bitch Better Have My Money- as the accountant.

The Blacklist is a crime thriller television series that has aired on NBC for 5 seasons so far, premiering on September 23, 2013. The series focuses on Raymond Reddington, a seasoned criminal who has eluded capture for decades, but now agrees to turn himself in, under the condition that he solely works with Elizabeth Keen, a rookie FBI profiler. The Blacklist stars James Spader and Megan Boone. Spader is such a talented actor! I can remember watching him on Boston Legal, from 2004 2008, as Alan Shore and he was amazing! Find this one on Netflix!

Six Feet Under is a comedy drama television series that aired on HBO for 5 seasons, from June 3, 2001 to August 21, 2005. The series chronicles the professional and personal lives of the Fisher family, who own and operate a family funeral home business. Six Feet Under stars Peter Krause, Michael C. Hall, Frances Conroy and Lauren Ambrose.

Ray Donovan is a crime drama television series that has aired on Showtime for 5 seasons so far, premiering on June 30, 2013. The series chronicles the life of Ray Donovan, whose job is to erase crime scene evidence for rich and powerful clients. Ray Donovan stars Liev Schreiber.

Arrow is an action, drama, superhero television series that has aired on The CW for 6 seasons so far, premiering on October 10, 2012. Now, I know what you’re thinking: how does a superhero show make a list of shows like Dexter? If you just watch, you’ll find out!  Arrow is my favorite show to watch and I hardly ever miss an episode! The series revolves around Oliver Queen, who is the mayor of Starling City by day and a hooded vigilante by night. Arrow stars Stephen Amell, who is one of the most talented actors today, in my opinion! Seriously, watch this show, if you don’t already! You’ll find the first 5 seasons on Netflix. The current season should drop shortly after it ends in May, 2018.

Breaking Bad is a crime, drama, thriller television series that aired on AMC for 5 seasons, from January 20, 2008 to September 29, 2013. The series centers on Walter White, a chemistry teacher diagnosed with terminal lung cancer and Jesse Pinkman, one of his former students. Together, they make and sell crystal meth, to ensure White’s family is cared for when he is gone! Breaking Bad stars Bryan Cranston and Aaron Paul. I really wish this series had gone for a few more seasons! The talented acting of Cranston and Paul made this show even more amazing! Cranston currently stars as Vince in the Amazon Original Series, Sneaky Pete, while Paul currently stars as Eddie Lane in the Hulu Original Series, The Path. This one is also available on Netflix.

Luther is a British psychological crime, drama television series that has aired on BBC One for 4 seasons so far, premiering on May 4, 2010. The series centers around John Luther, who is employed as a Detective Chief Inspector, but is constantly consumed by the darkness of his crimes. Luther stars Idris Elba. Watch this show…I guarantee you will love Idris Elba. He starred in this year’s movie, The Dark Tower, as Roland Deschain. Stream it on Netflix!

The Killing is a crime, drama, mystery television series that aired on AMC for 4 seasons, from April 3, 2011 to August 1, 2014. The series focuses on Sarah Linden and Stephen Holder, a pair of detectives who work homicide cases. The Killing stars Mireille Enos and Joel Kinnaman. I had never seen or heard of this actress and actor before, but they are pretty good. This one is now a Netflix Original!

Mr. Robot is a drama, thriller television series that has aired on USA for 3 seasons so far, premiering on June 24, 2015. The series follows Eliot Alderson, who is a computer programmer by day and a vigilante hacker by night. Mr. Robot stars Rami Malek. Malek played the role of Benjamin in the 2012 movie, The Twilight Saga: Breaking Dawn Part 2. Yes, it was a small role but a role nonetheless.

The Following is a crime, drama, thriller television series that aired on FOX for 3 seasons, from January 21, 2013 to May 18, 2015. The series showcases Ryan Hardy, who is a former Special Agent with the FBI, as he tries to find Joe Carroll, a serial killer who has escaped from prison. The Following stars Kevin Bacon and James Purefoy. Kevin Bacon…need I say more? Yes, the same Kevin Bacon who played the lead role of Ren McCormack in the 1984 movie, Footloose. Stream this creepiest of the TV shows like Dexter on Netflix!

Orphan Black is a Canadian biopunk, drama, thriller television series that aired for 5 seasons, from March 30, 2013 to August 12, 2017. The series chronicles Sarah Manning, a hustler with street smarts, who assumes the identities of several people, as a clone. Orphan Black stars Tatiana Maslany. I believe Amazon Video has exclusive rights to this one, so you’ll need to use your Prime membership for it.

The Fall is a British crime, drama, thriller television series that aired for 3 seasons, from May 13, 2013 to October 28, 2016. The series revolves around Stella Gibson, who works as a Detective Superintendent, as she hunts down Paul Spector, who is a serial killer. The Fall stars Gillian Anderson and Jamie Dornan. I love Jamie Dornan! If the name sounds familiar, that’s because he plays the main role of Christian Grey in the 50 Shades movie trilogy. Netflix took on this show as one of their Originals.

Mindhunter is a crime, drama television series that has aired on Netflix for 1 season so far, premiering on October 13, 2017. The series centers on Holden Ford and Bill Tench, who are both FBI Agents and Wendy Carr, a psychologist, as they interview serial killers in prison with the hopes of solving current case files. Mindhunter stars Jonathan Groff, Holt McCallany and Anna Torv. So, Jonathan Groff may not look familiar to you, but you may recognize his voice. He voiced the role of Kristoff in the 2013 movie, Frozen. Mindhunter is another Netflix Original now.

You can’t really have a list of TV shows like Dexter without mentioning Criminal Minds, now can you? The show began its 13th season in the fall of 2017, so you know it must be good! It follows the lives and cases of the FBI’s elite Behavioral Analysis Unit (BAU) as they solve heinous crimes by getting into the heads of the serial killers committing them. While recent seasons have started delving more into the back stories of the characters, you can easily pick up pretty much anywhere in the series without feeling totally lost. Check it out on Netflix.

All these TV shows like Dexter will send you on a creepy journey into the mind of some of the most disturbing murderers, but my favorite is probably either Blacklist or Criminal Minds. I’m also a huge fan of Arrow for those times when you want something a little different.

What about you? Tell us your favorite TV shows like Dexter that are just killer!