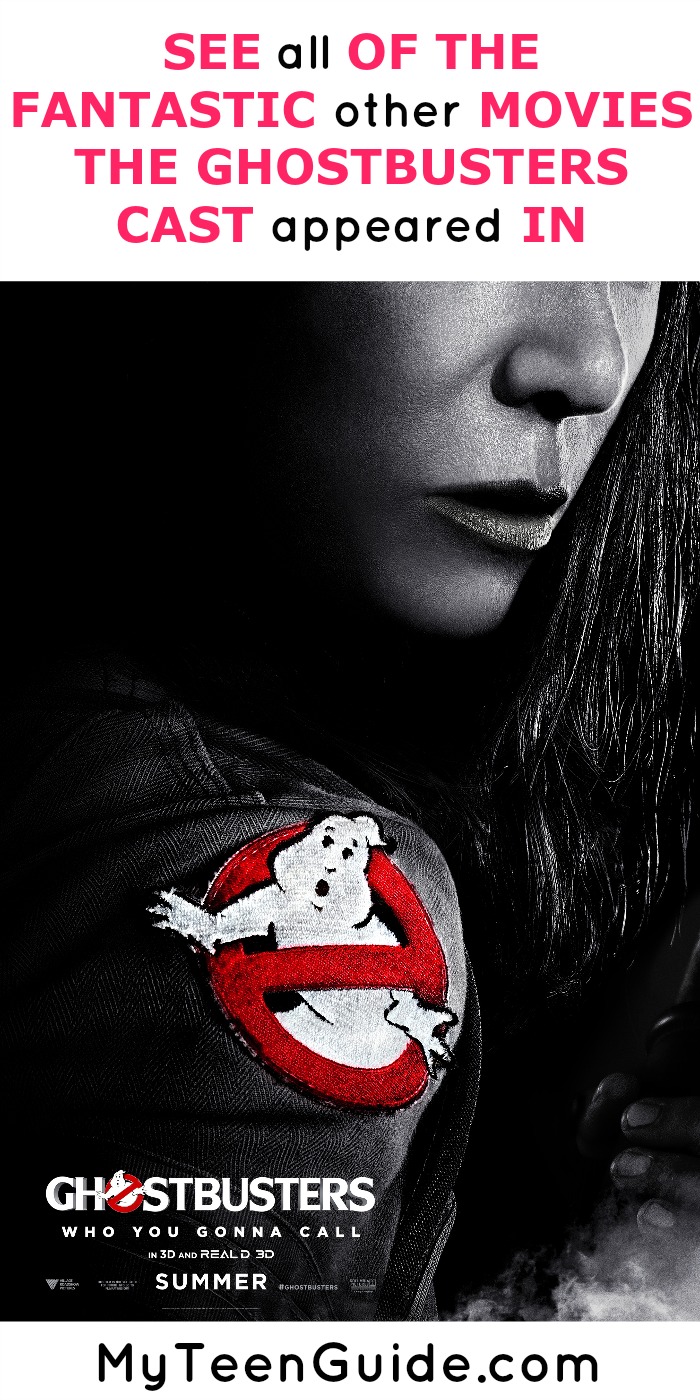 By now you may have heard, there is an almost entirely female cast for the new Ghostbusters reboot and also looks like it’s going to be an action-packed and funny movie! The 2016 movie version of Ghostbusters is due to hit theaters on July 15, 2016. In the new film, there are four women teaming up as the Ghostbusters and one male receptionist who is helping them. While some say this is brave of the directors, I call this baloney. This talented cast didn’t just fall out of the sky; they have some serious movie cred already to their name! (Plus did you know there are three recent SNL cast members on the cast list?) Check out the list, and find out which films made this mostly female cast famous!

Before we start into the actresses and actors themselves, check out the new Ghostbusters film trailer! Amazing, right?

Melissa McCarthy plays the role of Abby Yates. Melissa’s movie career started in 1999 when she played the role of Sandra in Go. Since then, she has appeared in the 2000 Charlie’s Angels as Doris, the 2011 Bridesmaids as Megan Price and the 2015 Spy as the lead Susan Cooper. McCar also known for playing Sookie St. James on the hit show Gilmore Girls, and as Molly on the tv show Mike and Molly. Seriously, I always perk up when I see this funny actress in a movie or tv show. She’s hilarious!

Kristen Wiig plays the role of Erin Gilbert. Her career first took off when she was on SNL as a cast member from 2005 to 2014. She’s played a whole list of annoying but funny characters including Gilly, The Target Lady, Dooneese, and Surprise Party Sue. Her movie career started in 2006 when she played the role of Carole Malone in Unaccompanied Minors. Since then, she has appeared in the 2007 Walk Hard: The Dewey Cox Story as Edith Cox, the 2010 All Good Things as Lauren Fleck and the 2015 The Martian as Annie Montrose. Most of this actresses list includes funny movies, though she’s played a few serious roles too! She should make a great team with Melissa McCarthy!

Kate McKinnon plays the role of Jillian Holtzmann. Her movie career started in 2012 when she played the role of Heather in My Best Day. Since then, she has appeared in the 2014 Life Partners as Trace, the 2016 Angry Birds Movie as Stella and the 2016 Finding Dory as the voice of Inez. Kate is also a cast member on SNL from 2012 to 2016. You might remember her skits as Hilary Clinton, Ellen DeGeneres and even Ed Sheeran and Justin Bieber.

Leslie Jones plays the role of Patty Tolan. Her movie career started in 1987 when she played the role of a night nurse in Home is Where the Hart Is. Since then, she has appeared in the 2003 National Security as Britney, the 2010 Lottery Ticket as Tasha and the 2015 Trainwreck as the role of an angry subway patron. Leslie has also been a writers and cast member on SNL for the 2014-2016 seasons and has had a few controversial skits. We are lining up some seriously funny ladies here!

Chris Hemsworth plays the role of Kevin. His movie career started in 2009 when he played the role of George Kirk in Star Trek. Since then, he has appeared in the 2011 Thor as Thor, the 2012 Snow White and the Huntsman as The Huntsman and the 2015 In the Heart of the Sea as Owen Chase.

So which of these others movies are you going to watch (or TV shows too!) that the cast of Ghostbusters has already starred in? Leave me a note in the comments and tell me what movies from this list you liked, and what you’re adding to your watch list!