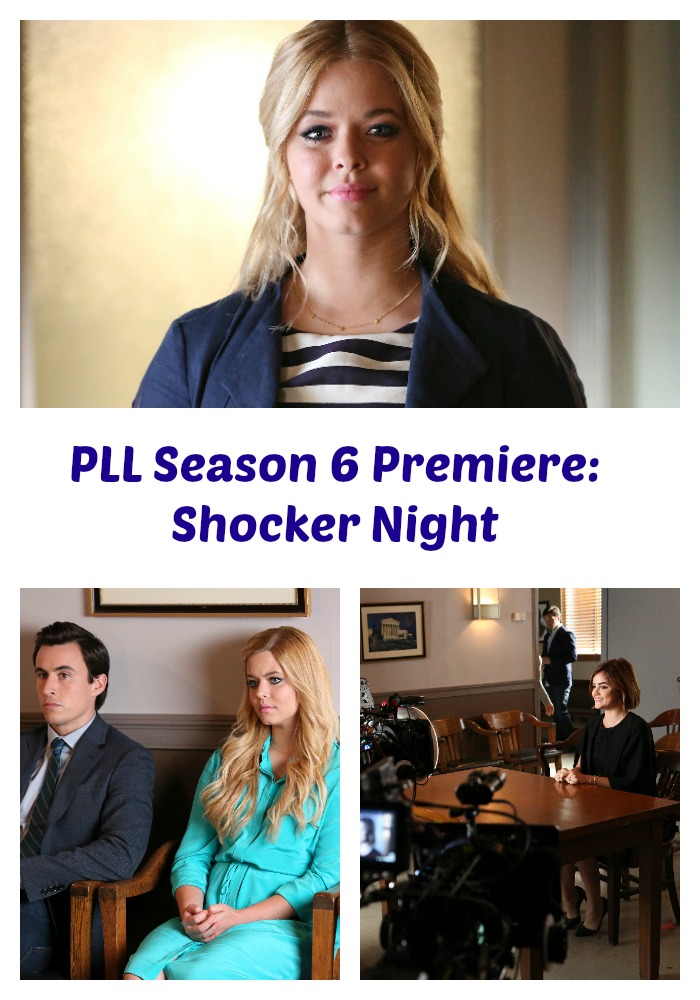 What a premiere shocker yesterday during Pretty Little Liars Season 6 premiere: Death came to Rosewood AGAIN! Read our recap to learn who was the victim and how it happened during this episode: Of Late I Think Of Rosewood.

In the first episode of Pretty Little Liars, season 6, episode 11,  we see a 5-year jump forward from the previous episodes. If you saw the prior recap about the 5 years forward special most of this episode touches on some of the experiences the liars and their friends have had over the last 5 years. Read on this recap to get caught on the highlight of

In addition to revealing some of those events, this PLL episode focuses around the request Allison sent to the liars. In a handwritten letter, she asks the girls to speak on behalf of Charlotte (revealed to buy A in the mid-season finale) to the courts. Spencer, Emily, Hanna and Mona all end up saying they’re no longer afraid of Charlotte and wish to see her released. Aria is the one only one who speaks her mind and says she never wants Charlotte to be released because of the trauma it still causes her. After considering the girls statements the court grants the request for Charlotte to be released.

That night the girls meet up at The Radley, a new apparently high-end hotel in what used to be the Radley Sanitarium. The hotel is run by Hana’s mom Ashley. During the night, Charlotte goes missing, and Allison calls the girls early the next morning asking if Charlotte went to them. Shortly after it is revealed that Charlotte’s body was found in an apparent suicide in front of the town’s church. After the news broke, Spencer calls Caleb to talk to Hana. Caleb shows up at her hotel room, and he reveals he may start working with Spencer and is going to be staying in her barn. A funeral is held for Charlotte in which following it is revealed to the liars that they should stay in town by the police. The police detective informed the liars that Charlotte did not commit suicide but was actually murdered.

Come back next week to read our recap of PLL. Here is a synopsis of the episode:

Charlotte’s Web: PLL Season 6, episode 2: The Liars start to look at one of their own as questions arise regarding the new mystery.

What a shocker yesterday during Pretty Little Liars Season 6 premiere: Of Late I Think Of Rosewood. Who do you think murdered Charlotte?