Missing the Gallagher’s as much as we are? These seven epic quotes from Shameless season 1 should help fill the hole in your heart! 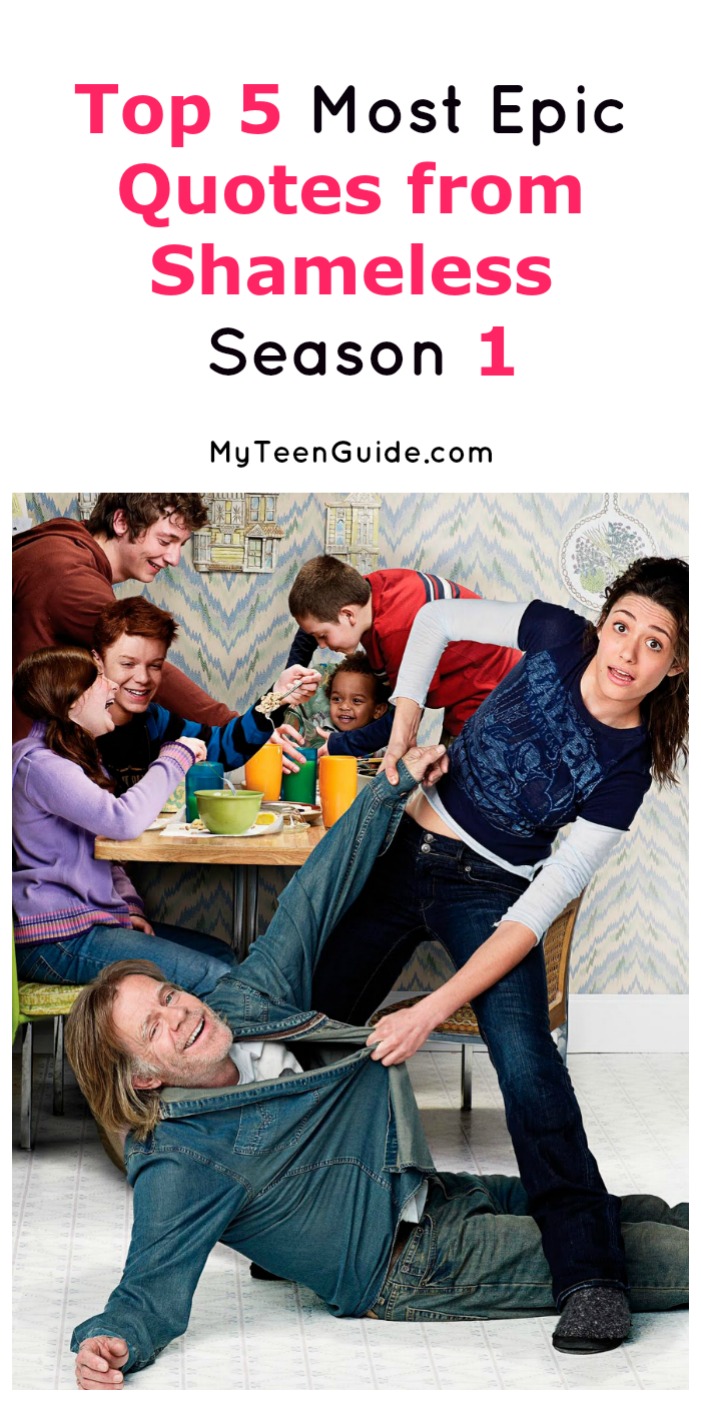 So, as far as I can tell, we still don’t have a hard release date for Shameless Season 8. We have rumors, but those change so often that they really aren’t even worth repeating! After binging on the first seven seasons, I am definitely still feeling the Gallagher withdrawals! If you haven’t heard of it, Shameless is a comedy-drama television series that airs on Showtime. The series premiered on January 9, 2011, with its season 7 making its premiere on October 2, 2016 (so it’s reasonable to hope that season 8 will debut around the same time this year). The series showcases the lives of the incredibly dysfunctional Gallagher family, which includes dad Frank and six children: Sammi, Fiona, Lip, Debbie, Carl and Liam. The six children pretty much raise themselves since Frank spends his days drinking. Here are some awesome quotes from the first season of Shameless.

Frank Gallagher, his very first lines in the series, talking about his kids:

Frank- “Fiona, my rock, huge help. Has all the best qualities of her mother, except she’s not a raging psycho b**ch. Lip, smart as a whip. Straight As and the honor roll – boy’s definitely going somewhere. Ian, industrious, conscientious, ambitious, incredible work ethic. Don’t have a clue where he got that from. Wants to be a paratrooper. Knows how to disembowel an enemy with a roll of dimes and an old gym sock. Carl. Uh, I don’t really know that much about Carl. Oh! Loves animals. Always dragging home some poor stray he found, taking them up to his room. Ah, Debbie. Sent by God. Total angel. Raises money for UNICEF year-round, some of which she actually turns in. Liam, going to be a star. I’m no biologist, but he looks a little bit like my first sponsor. He and the ex were close. And me, Frank Gallagher, father, teacher, mentor, captain of our little ship.”

Steve-  You know, 90% of the world’s problems are caused by tiny words that come in pairs. I mean, we’re healthy and we’re happy, but when people ask, we say “Not bad.”

Steve (aka Jimmy) is Fiona’s on again/off again boyfriend.

Kevin- “Yeah, use a blowtorch like a normal kid.”

Kevin Ball and his wife, Veronica Fisher are the Gallagher’s neighbors/friends. Kevin is also the owner of The Alibi Room (or was…see our post on what happened in season 7 if you don’t mind spoilers).

Conversation between Kermit and Fiona Gallagher, when Kermit goes to the Gallagher house looking for Frank Gallagher:

Fiona- “Only when there’s a check coming. Who are you?”

Fiona- “Frank doesn’t have any friends. Only people he hasn’t pissed off yet.”

Kermit is one of Frank’s buddies at The Alibi Room. Sort of. As Fiona said, Frank doesn’t really have “friends,” just people who haven’t gotten completely sick of him yet.

Conversation between Debbie Gallagher and her father, Frank Gallagher:

Debbie- “I don’t like that you’re getting hurt on purpose to make money. Isn’t that cheating?”

Frank- “I prefer to think of it as helping.”

Frank- “Yeah. When I collect workman’s comp, some lady has to fill out the paperwork. That’s her job. If it wasn’t for me, she’d be unemployed.”

Frank collects worker’s compensation after faking a job injury. It’s pretty much Frank’s main source of income! He takes a job, gets hurt, gets worker’s comp.

Honestly, there are TONS of epic quotes from Shameless season 1! Most of them. however, have a lot of language that just isn’t all that appropriate for us to post. If you’ve watched the show, you know what I mean. If you haven’t, be warned: it’s not politically correct and it’s full of language that the FTC bans from traditional networks! Hey, as long as that doesn’t bother you, it’s probably one of the best shows on television. Funny yet full of heart.

What are your favorite quotes from Shameless season 1? Share below!