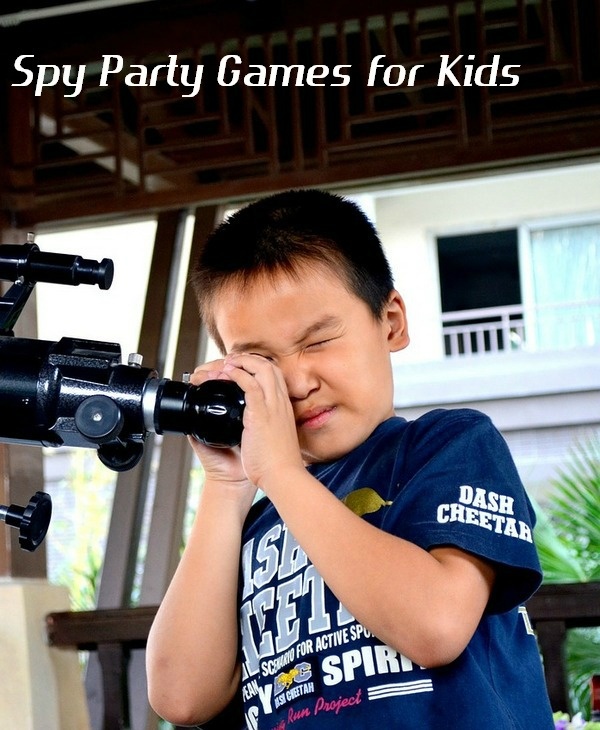 Spy party games for kids are fun to include during your detective party, or just to make a playdate more intriguing. Think about it: how often did you play “international super secret spy” as a child? The Spy Kids series made such games even more popular. Pretending to be a character of mystery and intrigue is one of the best parts of childhood! Your party guests will love spending the day acting like miniature James Bonds, even if they don’t know who that is!

A good spy must be able to trail a suspect without being caught. Choose a suspect and blindfold him (if going with a cooperative game, make the suspect an adult so kids will enjoy the “us against them” feeling). Next, attach little flags to his waist with velcro or tape. Have him stand in the center of a big circle. The spies need to get the flags off him without getting caught. They’ll need to be sneaky and fast! You can either make it so the child with the most flags wins, or turn it into a cooperative game where all the kids must work together to get the flags.

Let your little spies find the truth! Each kid of the party tells three facts: two are true and one is a lie. The others have to guess them right. You can let each kid speak personally, or there is a better way to keep some small folded paper pieces with truths, facts and lies written on them. You can make it even more intriguing by using our invisible ink recipe! Place the papers in a bowl and one kid would pick one paper at a time and read the fact written. The kid who guesses the truth and lies rightly wins a prize.

One of the easiest spy party games is the memory game. Place things like binoculars, calculator, camera, small pen dives, speaker, pens and other spy stuff on a large table and let all the children gaze at the arrangement once. Take them to another room and remove some of the items. Allow the group to come back, and the kids have to guess the items misplaced.

Spies need to be able to disguise their true identity on the fly, right? For this game, you’ll need a bunch of disguise supplies. Get wigs, funky glasses, hats and various pieces of clothing (things that are large enough to throw over your guest’s own clothes). Throw everything into a jumbled pile. Gather the kids around the pile in a circle. Blow a whistle (or just yell “go!”) and give the kids 30 seconds to throw on whatever they can to make their disguises. Take pictures of their crazy disguises to give out as a special memento of the event.

What are your favorite spy party games for kids? Tell us in the comments!