The House With a Clock In Its Walls Movie Quotes, Trivia & More!

Looking for all the best cast info, trivia and The House with a Clock in its Walls movie quotes?

Jack Black is a favorite in our household, so we’ll definitely be seeing this in theaters on September 21st! 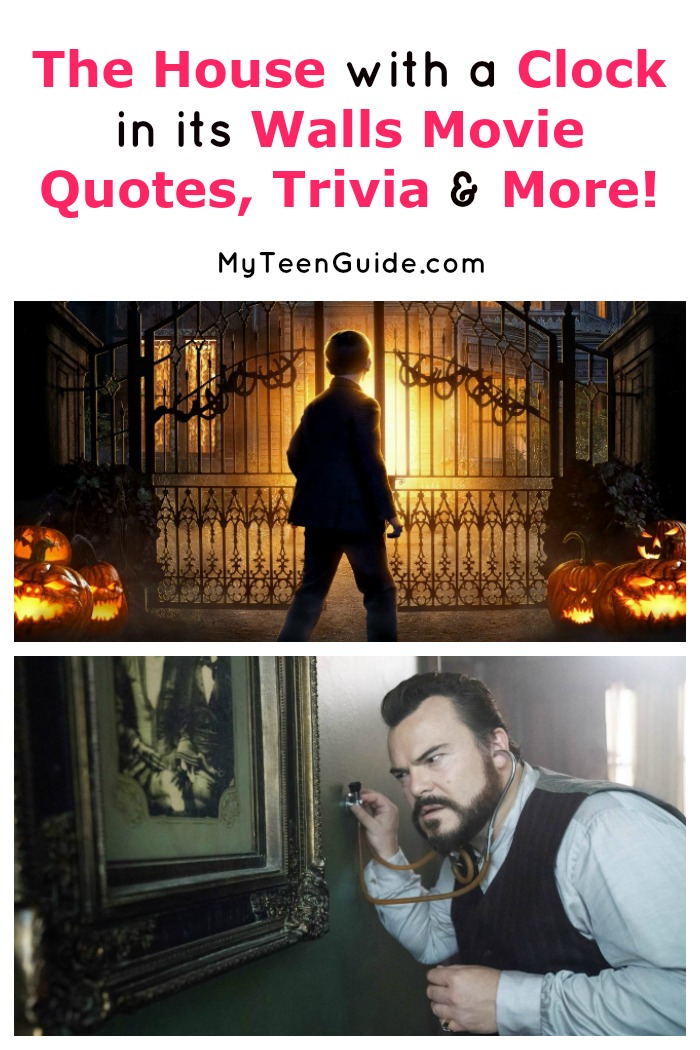 Until then, enjoy these quotes, movie trivia, and more!

Related:Everything You Want to Know About the Goosebumps Movie

The House With a Clock In Its Walls Movie Trivia & Quotes

The House With a Clock In Its Walls is an upcoming fantasy, horror movie that is based on the 1973 children’s Gothic, horror novel- of the same name- by John Bellairs

Don’t get stuck waiting in line! Sign up for a Fandango Fan Alert to buy your tickets ahead of time!

The House with a Clock in Its Wall Cast

Jack Black plays the role of Jonathan Barnavelt, a warlock and the uncle of Lewis.

Cate Blanchett plays the role of Florence Zimmerman, a witch and Jonathan’s neighbor and best friend.

Owen Vaccaro plays the role of Lewis Barnavelt, the nephew of Jonathan.

Kyle MacLachlan plays the role of Isaac Izard, an evil warlock, husband of Selena and former owner of Jonathan’s house.

The House With a Clock In Its Walls Movie Quotes

Stay weird. Show us how you do your weird by sharing a video using #WeirdIsWonderful @housewithaclock #sponsored pic.twitter.com/Y79Q5KbAKR

Lewis- “Are you wearing a robe?”

2. Conversation of Florence Zimmerman and Jonathan, both talking to Lewis:

Florence- “You’re Lewis I presume. How was your trip?”

Jonathan- “This old hag is my neighbor.”

Jonathan- “My God, did that withered purple skeleton just speak?”

Get an exclusive first look at Jack Black and Cate Blanchett in 'The House with a Clock in Its Walls.' https://t.co/YiLIkwSdNN @housewithaclock pic.twitter.com/EjcGLxwkcf

3. Conversation between Jonathan and Lewis:

Jonathan- “Have a look around. You’re perfectly safe.” (Before a purple monster with tentacles opens a door, followed by Jonathan quickly shutting the door).

4. Conversation between Jonathan and Lewis:

Jonathan- “Do you know what a warlock is, Lewis?”

Jonathan- “I think they’re a little more than boy witches.”

Lewis- “Are you saying that you’re a warlock?”

Jonathan- “Okay, have it your way.”

Magic comes from the inside. On September 21, you’re invited to #TheHouseWithAClock 🕰️ pic.twitter.com/AR1vMU3CNU

5. Conversation of Jonathan and Florence, both talking to Lewis:

Jonathan- “This house used to be owned by another warlock.”

Jonathan- “He left a hidden clock in the walls. We don’t know what it does, except something horrible.”

6. Conversation between Jonathan and Lewis:

Jonathan- “We have to destroy the clock!”

Lewis- “You can’t do this alone. I can help you! You want to see some real magic, I’ll show you.”

Have you heard any other great The House with a Clock in its Walls movie quotes or trivia? Which is your favorite cast member? Tell us below!