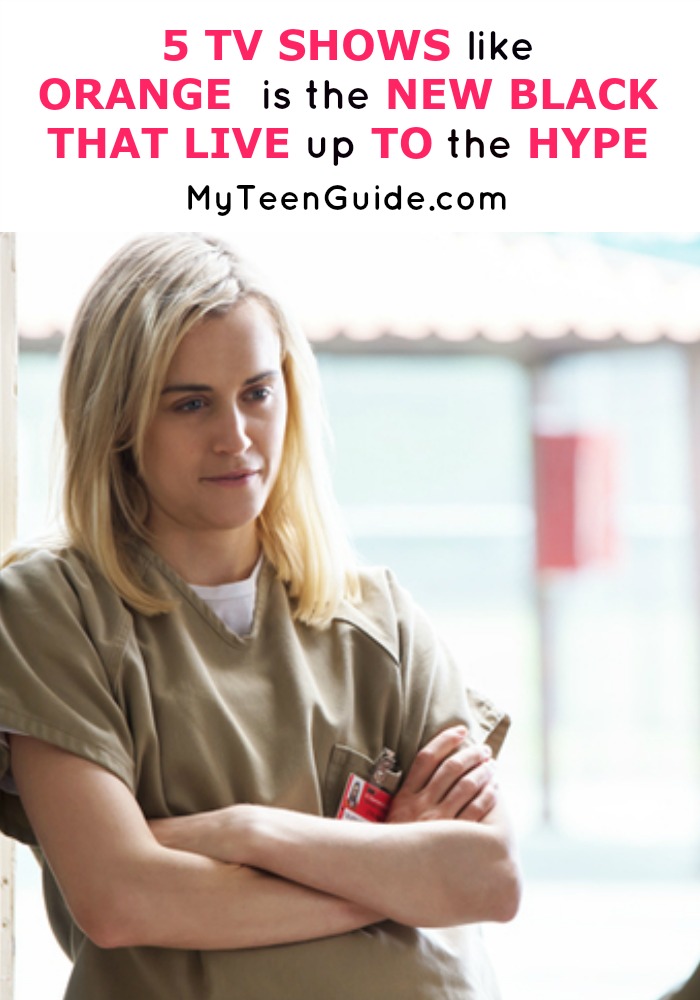 There are so many good shows on Netflix these days but one of the front runners is Orange Is The New Black. With so many fans, I know any of you are looking for shows like Orange Is The New Black. I think this is one of the more popular television shows to watch because it’s really breaking new ground and storylines that we haven’t seen as much.  There are a few other shows that are similar so pop your popcorn and get ready to watch them all!

Orange is the New Black is a comedy drama television series that premiered on Netflix on July 13, 2013, with season 4 being released on July 17, 2016. The series is based on the 2010 memoir Orange is the New Black: My Year in a Women’s Prison by Piper Kerman. The series is based on the life of Piper Chapman, who is serving a 15-month sentence for transporting money for her then-girlfriend, Alex Vause, an international drug smuggler. Orange is the New Black stars Taylor Schilling as Piper and Laura Prepon as Alex. Other cast members playing inmate roles include Kate Mulgrew, Taryn Manning, Uzo Aduba, Danielle Brooks and Natasha Lyonne.

Wentworth Prison is an Australian television drama series that premiered on SoHo on May 1, 2013, with season 4 concluding on July 26, 2016. The series follows Bea Smith, who is awaiting trial in prison, for trying to kill her husband, as she learns how to survive in prison. Wentworth Prison stars Danielle Cormack as Bea Smith. Other cast members playing inmate roles include Shareena Clanton, Celia Ireland, Socratis Otto and Tammy Macintosh.

Unbreakable Kimmy Schmidt is a television sitcom series that premiered on Netflix on March 6, 2015, with season 2 concluding on April 15, 2016. The series focuses on Kimmy Schmidt, who was rescued from a doomsday cult and begins a new life in New York City. Along the way, she finds a roommate named Titus Andromedon, befriends her landlady Lillian Kaushtupper and get a nanny job with socialite, Jacqueline Voorhees.  This show is hilarious, though it takes a few episodes to set up the story. Among my friends, this has defiently been one of the more popular televisison shows to watch. Unbreakable Kimmy Schmidt stars Ellie Kemper as Kimmy, Tituss Burgess as Titus, Carol Kane as Lillian and Jane Krakowski as Jacqueline.

Bad Girls is a British television drama series that aired on iTV for 8 seasons, from June 1, 1999 to December 20, 2006. The series focuses on various storylines of the inmates and staff in the G Wing at Larkhall Women’s Prison. Bad Girls stars Kika Mirylees as Julie Johnston, Victoria Alcock as Julie Sanders, Helen Fraser as Sylvia Hollamby, Jack Ellis as Jim Fenner and Tracey Wilkinson as Di Barber.

The L Word is a television drama series that aired on Showtime for 6 seasons, from January 18, 2004 to March 8, 2009. The series follows a small group of tight-knit lesbian friends in Los Angeles and their family and friends, some supportive of their lifestyle and some not so supportive. The L Word stars Mia Kirshner as Jenny Schecter, Jennifer Beals as Bette Porter, Laurel Holloman as Tina Kennard, Leisha Hailey as Alice Pieszecki, Katherine Moennig as Shane McCutcheon and Pam Grier as Kit Porter.

How to Get Away With Murder

How to Get Away with Murder is a drama television series that premiered on ABC on September 25, 2014, with season 3 premiering on September 22, 2016. The series focuses on law professor, Annalise Keating and her group of law students whose lives change when they become involved in a twisted murder plot. How to Get Away with Murder stars Viola Davis as Annalise, Alfred Enoch as Wes Gibbins, Jack Falahee as Connor Walsh, Aja Naomi King as Michaela Pratt, Matt McGorry as Asher Millstone and Karla Souza as Laurel Castillo. This series seems to hit it’s stride as one of the more popular television shows to watch, and the twists and turns are so diabolical!

So have you watched any of these TV shows like Orange Is The New Black? Tell me about your favorites in the comments!