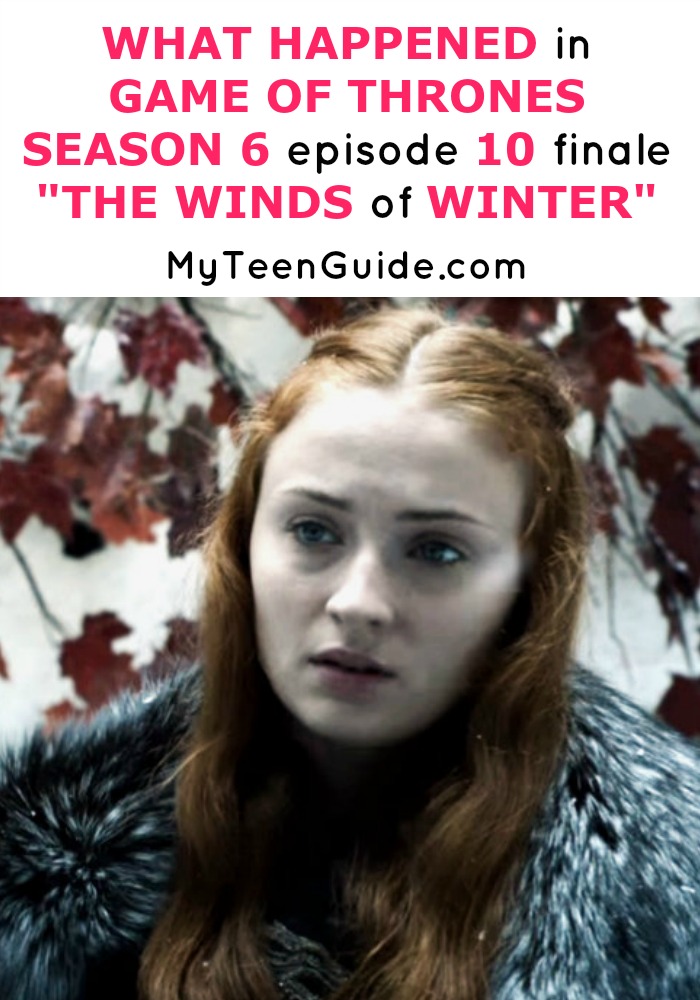 What happened in Game of Thrones Season 6 Episode 10, it was the finale! Tonight’s episode was longer than usual, in fact the longest episode of the series with a 69-minute runtime which left plenty of intense screentime for all of us fans. Last week’s Game of Thrones season six episode nine couldn’t have prepared me fully for these 69 minutes. The finale incredibly satisfying for those of us as everything began falling into place, but with so many intensely satisfying and bloody moments, you just have to dive into the episode. It’s all our nothing with this episode! Check out the full finale recap of what happened in Game of Thrones Season 6 Episode 10 below!

We start off tonight in King’s Landing and it’s the day of the trial for Cersei and Loras. The episode has an eerie musical track playing while we see everyone get ready for the trial. Loras stands before the High Sparrow and confesses to all the charges. Loras agrees to surrender his Tyrell name and all the luxuries and privileges his name brings, and dedicates his life to the seven gods. After agreeing, the sigil on the other servants is carved into the face of Loras.

King Tommen is met with his mother’s bodyguard who refuses to let him leave. Cersei refuses to leave and followers are dispatched to retrieve her. At the same time, Grand Maester Pycelle is trapped and brutally murdered by a horde of children. Though we had plenty of foreshadowing about Cersei’s plan, the enormity and brutality of it was simply shocking. Lancel, a member of the seven, is lured and stabbed to death by a child.

Need something to watch until Game of Thrones comes back? Check out: 5 Bold Adventure Movies Like Warcraft To Leave You On The Edge Of Your Seat

Lancel is lured down the cellars and finds himself surrounded by Wildfire, which we saw explosively used at the end of season 2. We see one of the children emerge and cut his Achilles  tendon. Then we see how dangerously close the candles are now to the Wildfire. Fighting for his life, he crawls to try and put the flames out to stop the Wildfire. Meanwhile, Margaery tries to get the high sparrow to evacuate before something goes wrong. Lancel fails and the Wildfire detonates killing the high sparrow and many others trapped inside. Cersei watches with a smile and Tommen watches with a shocked look. Cersei has just killed them all in a very big, murderous moment.

God damn, that episode was intense! Hurry up season 7 || @moviegainz || Tag your friends ||

Cersei then meets with Septa Unella, who she has tied up to a table. She tortures her briefly before confessing a lot about herself and her life. After some exchanged words, she calls her bodyguard in, who is revealed to be Gregor Clegane who continues to torture her as Cersei leaves.

It is revealed that Margaery was also killed in the Wildfire explosion set off by his mother. King Tommen then takes off his crown while watching over the burning building in the distance and then commits suicide by jumping out the window without hesitation.

A celebration is going on for the House Frey and Lannister at Riverrun. Jamie doesn’t seem to be in the celebrating mood. Walder Frey talks briefly with Jamie and before long Jamie begins insulting the Freys and then walks off. I suspect Jamie is now becoming unhinged from Cersei, and I think this will be the end of their loyalty but we will see.

Related: Pride and Prejudice and Zombies Trivia To Feed Your Latest Obsession

Back in King’s Landing Cersei is shown the body of Tommen and funeral arrangements are made. We know in this moment that the witch’s prophecy has come true and all of Cersei’s children have been killed. The difference is, this time, Tommen was killed by Cersei’s own plans.

NOT a Cersei fan by any stretch of the imagination but no one can deny how brilliantly she executed her revenge last night ? #gameofthrones #cersei

Sam meets with the master’s but they seem out of date with the details of Castle black. Sam is told he’ll need to meet with the leader but can remain in the library. The library he is brought to is absolutely massive and impresses Sam greatly.

In Winterfell, Jon Snow meets with Melisandre and Davos. Davos forces Melisandre to explain to Jon Snow about Shireen Baratheon’s death. Davos and Melisandre get into a heated argument before Davos asks Jon to have her executed for the murder. She defends herself by bringing up that Snow will need her to win the war against the White Walkers. Jon responds by telling her she needs to leave or be executed. Jon Snow and Sansa then discuss Littlefinger and the urgent need for trust. Sansa then tells Jon that a white raven arrived and that winter has arrived.

In Dorne, Olenna Tyrell meets with the Sand’s to discuss revenge against the Lannisters. Varys arrives to the meeting.

Back in Meereen, Daario and Daenerys discuss that Daario will stay behind to protect the people. Daario doesn’t like the idea of staying behind. Daenerys discusses that she’ll need to make alliances and that marriage will be the way. He pleads to let her bring him along but she refuses to give in. Following their meeting, Daenerys meets with Tyrion. Daenerys after some words, names Tyrion hand of the queen.

Walder Frey is served a dish at his dinner while he bellows for his sons. It’s then revealed that the pies are the key. Walder’s sons have been baked into the pies. Moments later his servant pulls away her mask and reveals herself to be Arya Stark, who then kills Walder Frey. The house of Frey is brought down in ruins, by one little girl. OMG I can’t believe this is what happened in Game of Thrones Season 6 Episode 10!

Littlefinger and Sansa talk and Littlefinger expresses that he wants to be on the Iron Throne with Sansa by his side. He is very harshly let down by Sansa.

Benjen Stark says he cannot go pass the wall because of ancient spells but that the others must continue on without him. Bran then finds a tree and goes into a vision. It’s the same vision where he was cut off before. Where Lyanna Stark is heard screaming in a tower. She is in bad condition, bloody, and cut severely. She whispers something and makes Ned promise her something as he is handed a baby. The baby’s face is shown intensely and then to Jon Snow, giving us the idea that the baby is actually Jon Snow. At this point, we also piece together that the babies father is Rhaegar Targaryen, the crown prince of Westeros, which explains why Robert would want to kill this baby. It is also revealed what  R+L=J is, Rhaegar + Lyanna = John. They leave us in plenty of shock, and choose to get into the nitty grttty details next season. But… what… how…. Gah!

Jamie returns to King’s Landing and can see the sept burning. He walks in as Cersei Lannister approaches the iron throne. Cersei is then named the queen.

Somewhere in the ocean Daenerys and her fleet sailing. Her dragons fly around the massive fleet, which is easily in the thousands, all bearing the Targaryen sigil. The episode and the season conclude with a long shot of that entire fleet and it sure leaves us excited for the following season to come.

Since it’s longer than usual, here is a list of characters killed off tonight in no particular order:

After that ending, I need to relive the best Game of Thrones finale moments! Check out some of the inside info to this amazing Game of Thrones episode in the video below from the makers of the show!

Finally, after many seasons of waiting, Daenerys is coming to Westeros!

So what did you think about what happened in Game of Thrones season 6 episode 10 finale? Tell me in the comments!