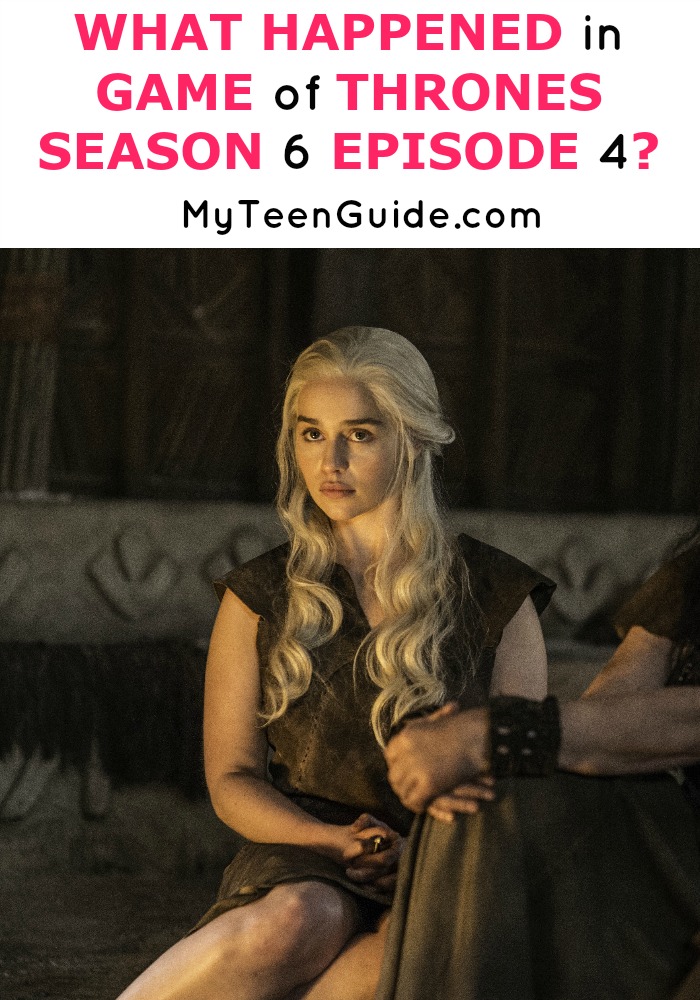 So lovelies, we’re back for another week with what happened in Game of Thrones Season 6 Episode 4 “The Book Of Stranger.” After last week’s episode with Jon Snow exerting his power, we can rightfully expect there to be more power shifts this week. Let me tell you things did get a bit epic. We saw another character axed (one that I was neutral about, but I know many people liked) and another rise to take back power and strength. I don’t want to give any spoilers if you haven’t seen what happened in Game of Thrones Season 6 Episode 4 just yet. To see all the spoilers, keep reading! 😉

Sansa arrives at Castle Black before Jon Snow’s departure. Jon Snow is relatively unsure what his plans are just that he has no intention of remaining at Castle Black and being lord commander of the Night’s Watch. Jon and Sansa briefly discuss their past, though most of the conversation takes place off screen. Sansa then proposes Jon fight to take back Winterfell an idea he rejects claiming he is tired of fighting. It isn’t until later on in the episode that Jon receives a letter from Ramsay claiming that he is Rickon, and he will harm him if Sansa isn’t brought back to Winterfell. Ramsay also threatens in the letter to attack Castle Black and kill the wildlings. It is this letter that prompts Jon to seek the possibility of attacking Winterfell and reclaiming it.

Meanwhile at Winterfell, Osha speaks with Ramsay where she tries to diminish her relationship with the Starks in an attempt to assassinate Ramsay. Ramsay is quick to understand her attempts and kills her first.

To the east in Meereen Tyrion, Grey Worm, Missandei, and Varys meet with the masters of Slaver’s Bay. Tyrion offers them a deal to end slavery within seven years, a form of peace that Grey Worm and Missandei disagree with and to an extreme degree.

We finally see Littlefinger once again. He returns to the Vale and meets with Robin, his nephew and lord of the Vale, with the pure intention of seeking the Vale’s troops to fight against Ramsay Bolton. This intention becomes successful due to how much trust Robin places in Littlefinger.

In King’s Landing, a lot is taking place as well. After a short talk with the High Sparrow, where he reveals his life as a cobbler (shoe maker) before he became a member of the faith, Margaery is permitted to see her brother Loras. Meanwhile, Cersei, Jamie, Lady Olenna, and Kevan Lannister plot a plan to essentially kill the High Sparrow before Margaery is subjected the same walk Cersei was.

Theon finally makes it home to Pyke where he learns of his father’s murder and meets with his sister Yara, who is not pleased to see him. After an argument, he pledges to help her become the ruler of the Iron Islands. If you remember back last season, Yara launched an effort to save him which cost a lot of lives. Pyke in what could only be described Stockholm’s Syndrome, refused to turn on Ramsay and depart. This was the reasoning behind their argument.

Jorah along with Daario reach Vaes Dothrak, and upon arrival, Daario discovers’s Jorah’s greyscale. At nightfall, they sneak into the city and eventually find Daenerys and plot a plan to escape. The plan is executed later on when Daenerys meets with the Khals, including Khal Moro, in this meeting they are debating her fate for dishonoring the Dothraki law by leaving after her Khal’s death. After a very awkwardly inspiring speech, she burns them all to death using flame pedestals which set’s everything quickly blazing. She then emerges from the engulfed structure, while the Dothraki people surround the burning structure. It’s long been thought that Daenerys could not be burned, and she emerges from the fire unharmed, but in true GOT fashion, her clothes have also burned and now gone. The Dothraki people bow down before her, only to be joined by Jorah and Daario. Seriously after everything that has happened to Daenerys, this was epic.

A photo posted by InstaThrones (@gameofthronesnotofficial) on May 16, 2016 at 7:06am PDT

So what did you think about what happened in Game of Thrones Season 6 Episode 4? Were you surprised by how The Mother Of Dragons stood up and took back her power? Tell me your thoughts on this episode down int he comments!