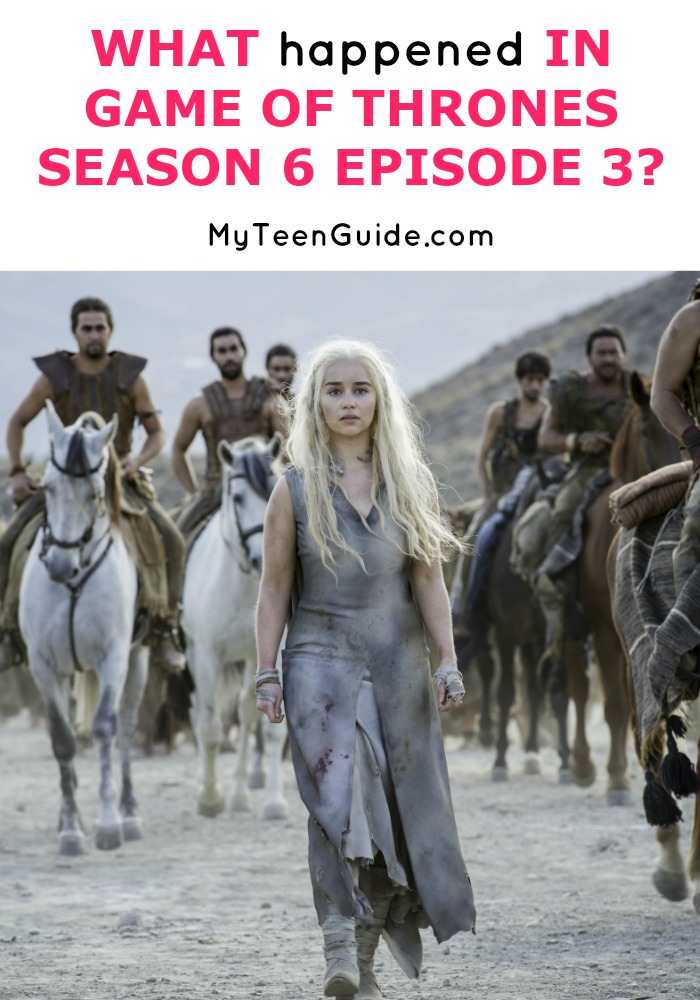 So you might be wondering what happened in Game of Thrones Season 6 Episode 3, after all, it is the buzz of the internet every week! A lot went down since last week’s Game of Thrones episode! While some of the storylines are building steam for some juicy future episodes, there were a couple storylines that rolled out some surprises. We definitely learned not to mess with Jon Snow this episode and if you are a fan of the books you will be pleased. See the full recap of Oathbreaker below to find out what happened in Game of Thrones Season 6 Episode 3 below!

What Happened In Game of Thrones Season 6 Episode 3 Oathbreaker?

The episode starts off with Jon Snow and his coming to the realization that he is once again alive. Melisandre and Davos speak briefly with Snow before Davos asks Melisandre to leave the room. Jon has trouble at first coming to terms with his fate, but as Davos speaks to him, he comes to terms quickly. As he emerges in front of the wildlings, he is seen as some sort of God, having risen from the dead.

Bran once again sees a historic memory. This time of his father fighting two men who appear to be Targaryen following the death of the “mad king”. We can assume that this is the moment where Ed finds his sister who was killed around this time, but Ed is cut off by his mentor.

We once again hear from Sam and Gilly, who are on a boat. Sam is sea sick while he discusses with Gilly that she cannot stay with him where he is going. He informs Gilly that both she and her baby will go and stay with Sam’s family while he attends the Citadel and becomes a Master. A plan she at first seems to reject but after a small amount of elaboration from Sam appears to agree.

Back with the Dothraki, Daenerys arrives at her new home with all the former Khaleesi’, and the introductions are not very warm. Daenerys’ arrival is explained to us by an unidentified former Khaleesi. Apparently Daenerys broke the rules by heading off on her own after her Khal died, and her fate is still being decided.

In the city of Meereen, Varys is attempting to find out more information about the Sons of the Harpy, the people who tried to kill Daenerys and have murdered a large amount of the Unsullied. As he is doing this, Tyrion tries to spark up a conversation with Grey and Vala, although his attempts render little success. Varys successfully learns that the Harpy are being funded by three cities, the leading parties of Astapor, Yunkai, and Valantis. Astapor and Yunkai were already conquered before by Daenerys. The four debate how to resolve the issue and they decide not to try war as the first attempt.

Back in King’s Landing someone new takes over Varys “birds” which we learn now are just children who are bribed with candy. Cersei wishes to have all the “birds” all over Westeros so she can know if anyone is talking down on them or plans on capitalizing on their current losses. Cersei and Jaime inject themselves into a small council meeting which doesn’t end ideally.

King Tommen marches in front of the high sparrow and demands Cersei be able to see her daughter’s final resting place. The High Sparrow denies his request and a small confrontation between the two erupts, although not physical. The High Sparrow does a fantastic job at talking Tommen down and to see his point of view.

In Braavos, Arya continues to train or something along those lines, just more brutal. She recites her previous life to the Waif. Also, they speak of Arya’s hit list, those who she holds responsible for wronging her. The Waif suggests a name is missing from the list but does not say which name. Arya finally gets the hang of fighting while blind.

Once more, she is offered if she says her name she can have her eyes back. She replies that she has no name as she has responded every time since becoming blind. Arya is offered a drink and hesitates at first to drink it. After drinking it, she gets her eyes back.

At Winterfell, Ramsay discusses political and military strategy. He is offered a prisoner, Rickon Stark for cooperation to help take out the wildlings and Jon Snow, who is viewed as a threat for allowing them in.
Back at Castle Black the four who killed Snow, including Olly, are sentenced to death and hanged to death. Although Jon Snow hesitates at first before releasing the board and hanging them. Afterward, he hands his cloak over to one his loyalist appointing him the lord commander of castle black. He then states “my watch has ended” and walks off. You don’t mess with Jon Snow! Now we all have to wait until next week, why?

Me after every episode lol #GameOfThrones

So do you feel all caught up on what happened on Game of Thrones Season 6 Episode 3 Oathbreaker? What are you most excited to see happen in Episode 4? Tel me all your fan theories in the comments!