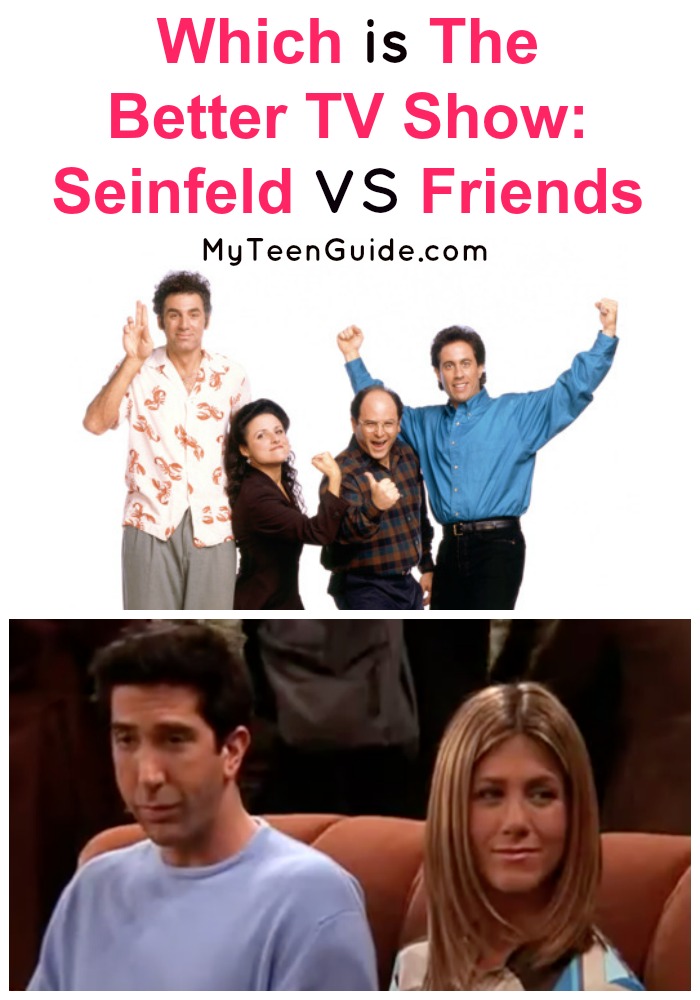 Which is the better TV show, Seinfeld or Friends? That’s a good question that I know has been argued about in my living room! There are countless die-hard fans sitting on each side of the fence. Both shows are hilarious, but which show is better? There was even a fan based poll on Tv.com where thousands of people weighed in. This is a hot debate! We’ve got the details on which show you should binge watch again first!

Which Is The Better TV Show, Seinfeld or Friends?

So which show is better, Seinfeld or Friends? It is a very close race! Seinfeld received 19,435 votes. Friends received 16,166 votes. Both shows are well loved, have lots of laughs, and have fans still binge watching years later. Let’s explore which show wins and why!

Related: 5 Hilarious TV Shows Like The Office That Are All Of Us

If you’ve ever watched Seinfeld, you’ve probably noticed that some of the characters aren’t particularly likable in the traditional sense. But, that doesn’t mean they can’t be funny. The writers of the series more or less pioneered this idea and it worked!

Seinfeld always goes for the laugh, doing so at the expense of anything else. He never tries to teach a lesson. Isn’t that what comedy is all about?

Related: TV Shows Like Community On Netflix To Make You Laugh So Hard You’ll Cry

It has been said that Friends plays out more like a drama than a comedy. What’s important about this? It’s simple. Many people tend to be more emotionally invested in a dramatic series. This usually leads to a more pronounced connection with the characters. And, in fact, Friends does have a broader audience. Maybe that’s why.

Related: The Most Interesting Facts And Best Quotes From Gilmore  Girls

Friends was also instrumental in paving the way for other popular sitcoms such as New Girl and How I Met Your Mother. Both great shows in their own right. You can also currently find Friends streaming on Netflix, which while it doesn’t effect if the show is good, I am more likely to binge watch the reruns!

Seinfeld and Friends are basically about two different groups of people who hang out together because they want to. There is no outside force involved.

When all is said and done, there probably still won’t be an official winner of this Seinfeld vs. Friends debate. Is one REALLY better than the other? One thing is certain, though. The differences between these two iconic series are what make them both so popular, even to this day.

So what’s your opinion in this long-standing debate, which show is better Seinfeld or Friends? Are you loyal to Team Seinfeld or will Friends always be your secret (or not-so-secret) addiction? Inquiring minds want to know!

Image via wikia here and here.