Finding great vampire romance anime is a bit tricky. Sure, there are plenty of vampire-themed anime, and even a good amount of romantic anime, but put the two together and it gets a little more difficult! I’m always up for a challenge, though! 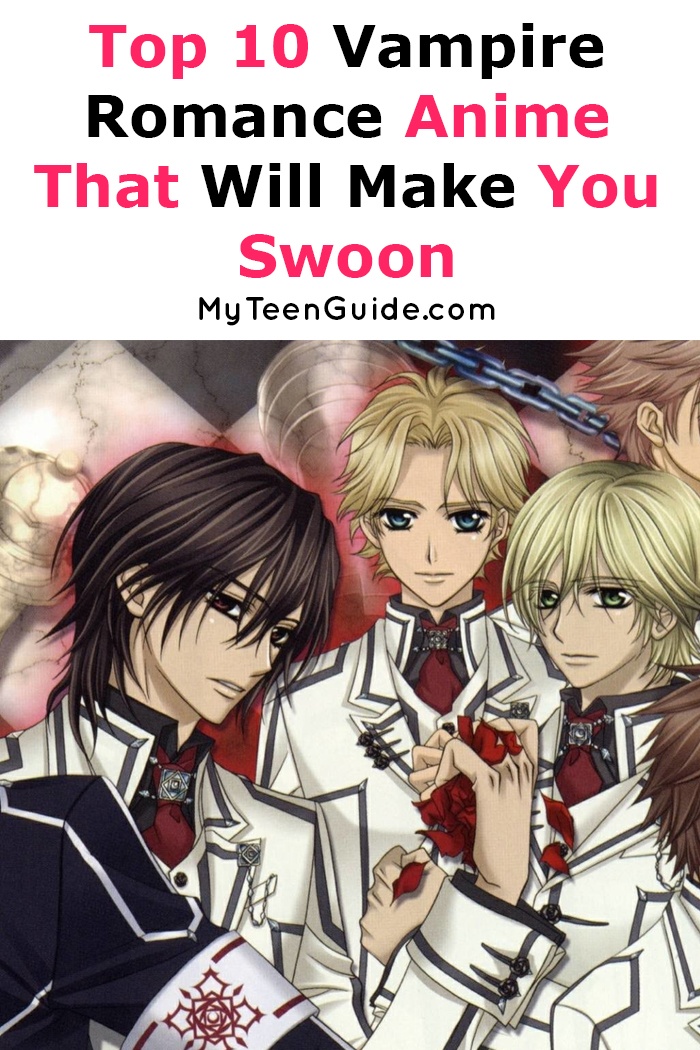 If you’re in the mood for the anime version of Twilight (no, there isn’t actually one…that I know of), read on for some great picks!

What is Vampire Romance Anime

I usually start out here by defining the genre, as I did in supernatural anime, but really, what is there to define about vampire romance? It’s romantic anime involving vampires! Or, if you prefer, vampires with romance. See, pretty self-explanatory, right?

(which is, at its heart, a love story)  a long, long time ago. It’s a popular theme across just about all forms of pop culture, and across generations, including anime!

Let’s check out my top ten picks for the best vampire romance anime, shall we?

Before we begin, let’s talk ratings, because they are a little different in anime.

I noted the rating for each one, and tried to stick to PG-13 and regular R, but there are a couple of R+ on this list. It’s not my place to censor your viewing, so you’ll need to decide for yourself if you are comfortable watching certain levels of R!

One of the most popular vampire romance anime of all time, Vampire Knight has a very “Twilight” feel to it (without all the sparkling, of course).

I don’t usually include sequels on lists like this because it feels like cheating, but Vampire Knight: Guilty deserves its own spot in the vampire romance anime category.

3. Dance in the Vampire Bund

Akira Kaburagi doesn’t believe in vampires. In fact, he doesn’t even want to talk about them…although he’s not sure why the topic bothers him so much. Mina Tepes knows for a fact that they’re real…as she’s the ruler of them all!

At Youkai Academy, monsters spend their day in human form, taking human classes, and basically learning how to get along in a world full of humans. Other than that, it’s just your average boarding school! However, the school has one very strict rule: all humans found on campus must be executed right away.

In a world of the strange and supernatural, Karin Maaka is even weirder than weird. See, she’s a vampire with a big problem: she sometimes makes too much blood. Now, you’d think that wouldn’t be an issue for vamps, who need blood to survive, but the more she makes, the more anemic and dizzy she gets.

Based on the Takashi Noguchi manga, Kurozuka is a fabulous supernatural historical vampire romance anime (sort of).

Another vampire romance anime that takes place in a school setting, Dance with Devils follows the story of Ritsuka Tachibana.

Staz Charlie Blood has a reputation for being one of the fiercest, most bloodthirsty vampires in the demon world, but as anyone on the receiving end of gossip can tell you, sometimes a reputation is a complete lie. See, Staz has zero interest in human blood! He’d rather lay around all day watching anime, reading manga, and playing video games.

Saya seems like a normal girl living with an adoptive family, aside from her anemia and complete inability to recall anything that happened to her beyond the last year. However, just because you forget something doesn’t mean it didn’t happen!

Taito can’t seem to stay awake lately, and when he’s lost in his dream world, he sees a vampire who keeps saying that she has given him her poison. Sometimes, Taito even hears her voice when he’s awake.

I’ll be honest, it’s really hard to find great vampire romance anime like Vampire Knight, especially if your definition of the genre is along the lines of Twilight. Still, all of the anime on this list have their share of romantic elements!

Can you think of any other great vampire romance anime that I missed? Tell me below!