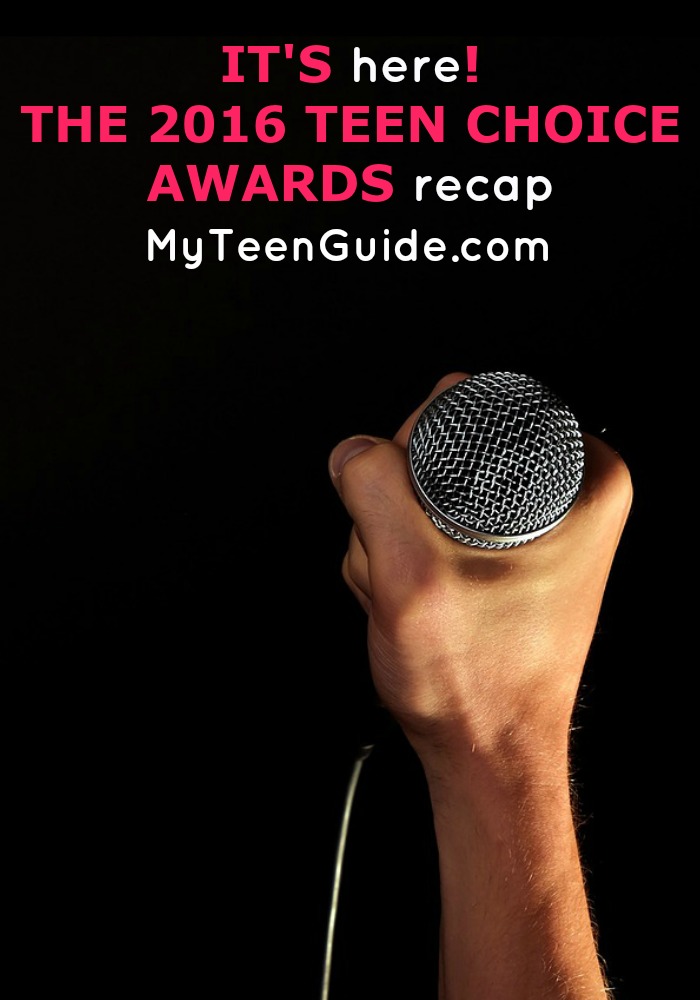 Get your surfboards read, the 2016 Teen Choice awards recap is here! This years show honored some of the best in TV shows, movies and web stars and this year’s awards brought some touching moments from honoring the victums of Sandy Hook, to Justin Timberlake’s way inspiration speech. Plus my girls from Pretty Little Liars slayed in the wardrobe department! Check out all the best moments with our 2016 Teen Choice Awards recap!

This year’s Teen Choice Awards were held July 31, 2016 at The Forum in Inglewood, California. The host of the ceremonies was John Cena and Victoria Justice. Cena is most known for being a WWE pro-wrestler and Justice is well-known for her roles as Lola in Zoey 10 from 2008 to 2008 and Tori Vega in Victorious 101 from 2010 to 2013.

There were a ton of awards to hand out and obviously not all of them were presented during the telecast. I was bummed that out of 92 awards, only 11 were given out live. I was expecting more drama! I have, however, included all the nominees and winners below so you won’t miss a single one!

First up, Ross Lynch from Austin & Ally and Gina Rodriguez from Jane the Virgin presented the award for Choice Movie Actor: Sci-Fi/Fantasy to Chris Evans for his role as Steve Rogers/Captain America in Captain America: Civil War. In his speech, Evans said, “Thank you very much for your support and allowing me to live out my dream.” While I love Chris Evans, I love Robert Downey Jr just a tiny bit more.

Off-camera and backstage, Zine star Cameron Dallas was presented the award for Social Media King. He had some tough competition in this category competing against Justin Bieber, Kanye West and Zane!

Singers Kelsea Ballereini, Alessia Cara and Bebe Rexha, presented the award for Choice TV Actor: Sci-Fi/Fantasy to Grant Gustin, for his role as Barry Allen/Flash in the show The Flash. I am more of an Arrow fan but Flash is not too bad. In his speech, he said, “Thank you guys so much. I’ve got the coolest job in the world. I love playing this character.”

Next up Lea Michele from Glee and web star Bethany Mota presented the award for Choice TV Show: Drama to Pretty Little Liars. This made me very happy since I love that show. Accepting the award were Shay Mitchell, Lucy Hale, Ashley Benson, Troian Bellisario and Tyler Blackburn. Benson stated, “It’s been a crazy ride, seven years. Without your guys, we wouldn’t have an amazing successful TV show for the last seven years.”

Sarah Hyland from Modern Family and John Stamos from Scream Queens, presented the award…Well, Sarah was presenting the award while John was trying to catch Pokémon…for Choice Summer TV Show to Teen Wolf. I am not a Teen Wolf fanm but I have friends that are obsessed with the show. Accepting the award were Tyler Posey, Shelley Hennig and Cody Christian. In the speech, Posey said, “We want to thank Fox, Teen Choice Awards and every single one of you beautiful people. You’re the only reason that we’re here.

Host of BET’s 106 & Park, Terrence J and Katie Nolan, host of Fox Sports 1, Garbage Time with Katie Nolan, introduced Charlie Puth, who performed his new song We Don’t Talk Anymore. I like Puth but the perfomance was just ok, there wasn’t much spark.

Lana Parrilla from Once Upon a Time and Paul Wesley from Vampire Diaries, presented the award for Choice TV Show: Comedy to Fuller House. I loved Full House and I love Fuller House just as much. Accepting the award were Andrea Barber, Jodie Sweetin and Candace Cameron-Bure, who used some of their old Full House catchphrases. Barber- “Hola Teenerinos!”, Bure- “Oh Mylanta, I can’t believe we won!” Sweetin- “And if you didn’t vote for us, then how rude!” Loved it!

Basketball great Kobe Bryant presented the first Decade Award to Justin Timberlake, for his evolution as an artist over the past 10 years. In his speech, Timberlake said, “I grew up in Millington, Tennessee, just outside of Memphis, where I was blessed to be raised by parents and a family who taught me some big lessons. They taught me to respect them. They taught me to respect myself and to respect all people on the basis of their character — not where they live, not what they did for a living or the color of their skin.”

Damon Wayans and Clayne Crawford, from the upcoming TV series Lethal Weapon, present the award for Choice Movie: Drama to Miracles from Heaven. The two main stars of the movie, Jennifer Garner and Kylie Rogers accepted the award. At the end of her speech Garner said, “All the kids who are in a hospital waiting for a miracle, don’t give up hope.” I actually saw this movie and it was a tear-jerker for sure but Garner did an amazing job in her role.

The next part of the show was so touching and emotional. Jessica Alba and Ne-Yo were onstage with 10 teenagers, families and survivors, who have been impacted by gun violence from places Baton Rouge, Dallas, Sandy Hook, Orlando and San Bernardino. Alba said, “These teens had the courage to come here and share their grief and take a stand. Tonight we stand together with these teens, united in our call for peace and an end to this violence.” Among those on stage were 15-year old Cameron, whose father Alton Sterling, a 37-year old African American who was fatally shot numerous times at close range, while being pinned on the ground by two white police officers in Baton Rouge on July 5, 2016. Also onstage was J.T. Lewis, who was just 12-years old when his six-year old brother, Jesse, was killed at a shooting at his school Sandy Hook Elementary on December 14, 2012.That day, a 20-year old opened fire inside the school, killing himself along with 20 students and 6 school staff members. Then, Ne-Yo performed Marvin Gaye’s hit song What’s Going On. It was absolutely beautiful.

Next, Brie and Nikki Bella from WWE Wrestling and Matthew Daddario from Shadowhunters presented the award for Choice Movie Breakout Star to Daisy Ridley, for her role as Rey in Star Wars: The Force Awakens.

Mark Consuelos and Kylie Bunbury, who will star in the upcoming television series Pitch, presented the next performance, Sereyah, who plays Tiana Brown on Empire. She performed Look but Don’t Touch.

Look but don't touch! @Serayah slayed at the #TeenChoice awards.

Laura Marano from Austin & Ally and Maia Mitchell from The Fosters presented the awards for Choice Web Star: Female to Lilly Singh (who was not on-hand to accept her award) and Choice Web Star: Male to Dolan Twins, Grayson and Ethan. Ethan said in the speech, “Do whatever makes you happy and do whatever you’re passionate about.”

The show ended with a performance by Jason Derulo, who sang his new song Kiss the Sky from the upcoming Storks movie, along with a medley of some of his hits including What You Say, Ridin’ Solo, Talk Dirty, Trumpets and Want to Want Me. I love Jason Derulo and it is so much fun watching his performances.

Choice Rock Song
Empire of The Sun, “Walking On a Dream”
Fitz and the Tantrums, “HandClap”
5 Seconds of Summer, “Jet Black Heart”- WINNER!!!
Elle King, “America’s Sweetheart”
OneRepublic, “Wherever I Go”
twenty one pilots, “Stressed Out”

So what did you think about the Teen Choice Awards recap this year? I agree a few categories felt a bit rigged this year, but overall I was happy with this year’s list of winners! Tell us who else should have won a surfboard down in the comments!