Feeling the need for some amazing Bad Times at the El Royale movie quotes?

How about all the best trivia, including everything you need to know about the cast of this exciting mystery?

RELATED: 10 Must-See Movies Like Bad Times at the El Royale 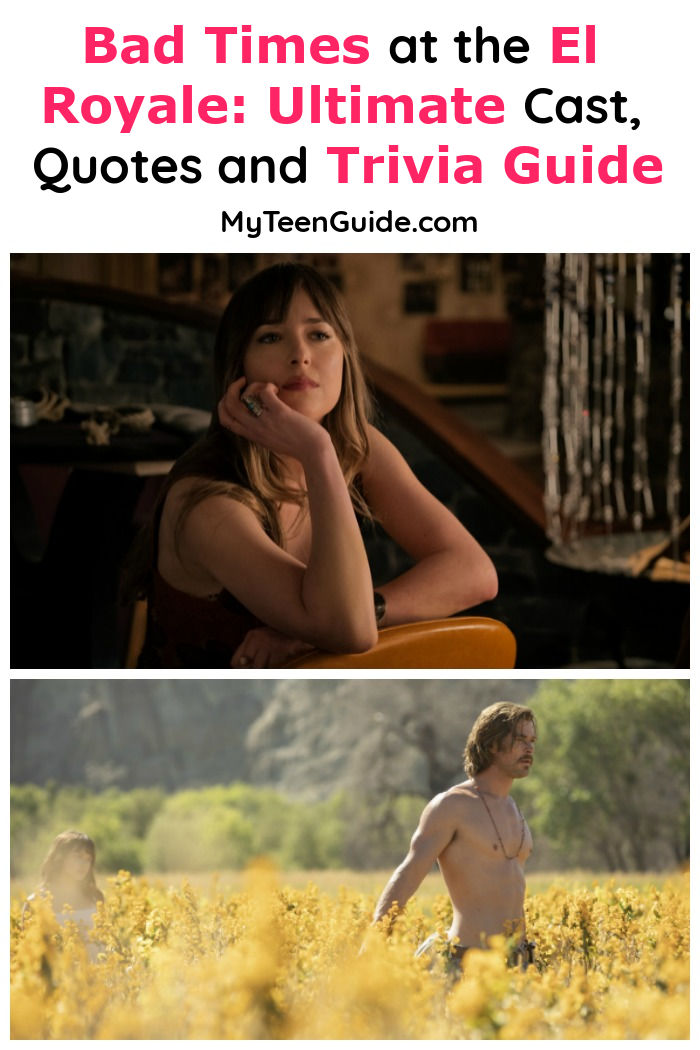 Read on for your ultimate guide to this incredibly mystery thriller flick set to hit theaters on October 12th!

Bad Times at the El Royale is an upcoming mystery, thriller movie, set to hit theaters on October 12, 2018.

Read on to learn about the cast of the movie, plus check out our favorite quotes and trivia!

Cast of Bad Times at the El Royale

Bridges Plays Father Daniel Flynn, a priest down on his luck.

I am Nigerian. I am a woman. I am a Queen. I am Everything I need and more, and woman young and vintage, so are you.

Cynthia Erivo as Darlene Sweet, a singer who is down on her luck.

Dakota Johnson as Emily Summerspring, a criminal from the South.

Back to my first magazine shoot with @marieclairemag and my long hair ???

Looks can be deceiving. #ElRoyaleMovie

7. Lewis Pullman as the hotel concierge

Lewis plays the hotel concierge at the El Royale.

1. Hotel concierge at the El Royale Hotel, talking to the new guests:

Concierge- “The El Royale is a bi-state establishment. You have the option to choose a room in either California or Nevada.”

(The El Royale is located on Lake Tahoe, which is on the state line of California and Nevada)

Darlene- “How’d you end up at the El Royale?”

Father Flynn- “The Ritz-Carlton was booked.”

3. Laramie Seymour Sullivan, talking to the other hotel guests:

Laramie- “This place used to be hustling and bustling. Old Dean Martin even sang a song about it once.”

Concierge- “This is not a place for a priest, Father. You shouldn’t be here.”

Laramie- “We might need to work on your sales pitch, son. “The El Royale, no place for a priest.””

No place for a priest. #ElRoyaleMovie

5. Conversation between Father Flynn and the hotel concierge:

Father Flynn- “Are you watching me?”

Concierge- “I only watch who they tell me to watch.”

1. It’s sort of based on a real hotel

The El Royale Hotel is based on the Cal Neva Resort and Casino (Lake Tahoe), which was owned by Frank Sinatra, from 1960-1963. Fun fact: Frank’s ghost is said to haunt it, along with the ghosts of other famous movie stars!

Just to help , I’m actually pointing my head out for you for #OldHeadshotsday

Drew Goddard is the director of Bad Times at the El Royale, but did you know that Goddard also directed the 2012- The Cabin in the Woods

? And here’s another fun fact: Did you also know that Chris Hemsworth also starred in the 2012 movie, as Curt Vaughan?

4. It wasn’t filmed anywhere near California or Nevada!

A post shared by YourfriendinVancouver (@explorebcwithus) on Aug 23, 2018 at 2:36pm PDT

New @avengers #infinitywar #thor posters are dropping like hot cakes, this one is look #57, prep time 34 yrs, cooking time 2-3 seconds, you’ll need the following : cool cape, mangy haircut, one eye, one eye patch, 4 week old stubble, a little “over the shoulder” some metal arms and you’re done! Recipe courtesy of @zocobodypro. Jokes aside this movie is gonna blow your mind ?????????

Chris Hemsworth’s character in Avengers is a lot more built than his character in Bad Times at the El Royale! He had to lose about 25 pounds of muscle for the role!

There, now you know everything you need to know about Bad Times at the El Royale! Alas, you still have to wait a couple of months before it comes out, but the way time flies it’ll be October 12th in no time at all!

Do you have any other favorite Bad Times at the El Royale movie quotes or trivia? Share below!