Playing hilarious party games with my friends is one of my fav memories, they make for such great photo ops and are fun to play indoors or outdoors!

If you need some inspiration for some fun games to play, I have you covered.

I rounded up a few of my favorites. 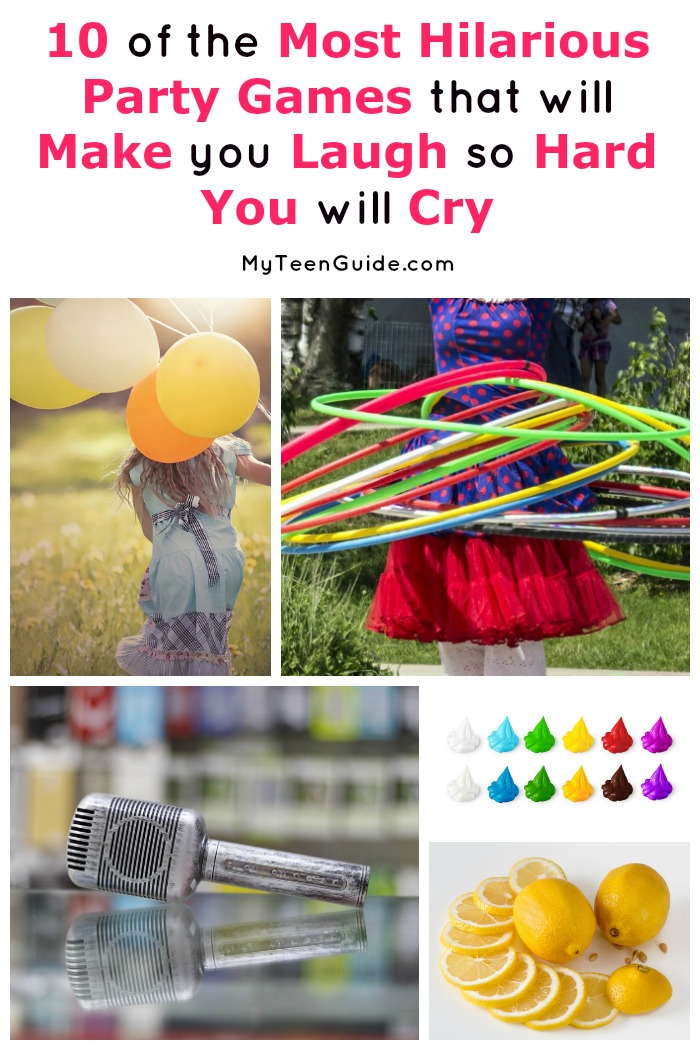 These games are so easy to put together, just remember to have your camera

Having a party happening outside?

Try one of my fav hilarious party games, this one is too funny!

This one you need a nice large space to play in.

This game takes a bit of prep work but is well worth the effort to prep before the party.

This has got to be one of my fav indoor party games for teens.

The game ends when all of the prizes are ripped out of the ball! This game can get hilarious, especially for a large group of teens.

I can’t wait to get some more prizes to play again!

This party game is hilarious to hear everyone’s responses.

You never know what your friends will pick!

Create a jar full of questions with each paper including a choice.

The only rule is that participants must choose one of the options on their question.

Here are some examples of questions:

This game is a little messy, but so much fun!

work great) on the bottom of a pie tin (one for each player).

Next, fill the tin with whipped cream and challenge players to find the gummy worms.

They can only use their mouths!

First player to find all their worms wins!

Make sure you give everyone a bib or something to cover their clothes, though!

for all of the guests.

You’ll want to make sure they all have the same type of nipple.

Basically, make lemonade with fresh lemons, minus most of the sugar.

You’ll want to add a little sugar though so it’s not TOO gross.

Give everyone their own bottle.

On the count of three, go!

The first person to suck down all the juice through the baby bottle wins.

This hilarious indoor party game is a lot like musical chairs, but with a twist!

for each guest- minus one- and lay them out in a circle. Start the music and dance around the hoops in a circle.

When the music stops, everyone has to get into a hoop.

As the game continues, keep removing one hoop until everyone has to try to cram their bodies into the one remaining hoop!

Anything goes here: a hand, a foot, their whole body. If part of you is in the hoop, you’re safe. Don’t make it to the hoop? You’re out!

This game doesn’t really end with a single winner. It’s more about the fun than the competition.

Here are some other funny hula hoop ideas:

This is a fun activity that turns a party favorite- photo booths- into a wacky challenge!

Set up a photo booth or even just a photo station before the party.

Next to it, lay out craft supplies, like paper plates, markers

Challenge guests to create their own crazy hat out of only the supplies available. Then have them take their picture in the hat.

Give out prizes in a bunch of categories, like:

You can make up categories for players to compete in before the party or make them up after you see the pictures, so everyone has a chance to win.

Regular karaoke is fun on its own, but when you make it a tag team sport, it’s hilarious!

Divide your guests into two teams and load up a party playlist of fun songs.

Here’s how to play:

You can either use a rented karaoke machine or download an app.

If you go the app route, I recommend doing it on an iPad or larger tablet, so players can easily see the lyrics.

You can also find plenty of karaoke songs on YouTube!

These are just a few of our favorite hilarious party games for teens!

Which one of these games are you going to try with your friends?

Do you know of any other hilarious party games for teens we need to add to our list for playing indoors or outdoors?

Tell me all your favs in the comments!