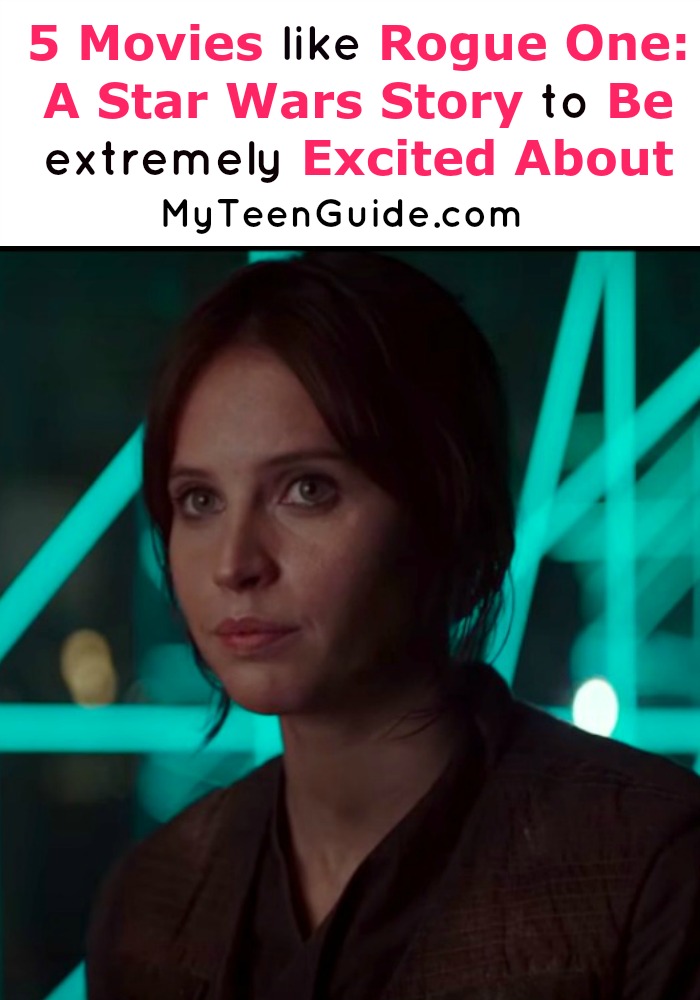 The world is super excited for the new Star Wars Rogue One movie, so I’ve been on the hunt to look for movies like it to watch. Of course, we could all binge watch all the other Star Wars movies before the new flick comes out, but I know I’ve watched Star Wars so much. I’m looking for more. If you love sci-fi, action, and the possibility of fighting off evil warlords taking over in space, then this list of movies like Rogue One is for you! Read on to see all the flicks!

5 Movies Like Rogue One: A Star Wars Story To Be Extremely Excited About

5 Movies Like Rogue One: A Star Wars Story To Be Extremely Excited About

Avatar is a 2009 epic science fiction movie that is the 1st is a series of 5, which will be followed by Avatar 2 in December of 2018, Avatar 3 in December of 2020, Avatar 4 in December of 2022 and Avatar 5 in December of 2023. The movie is about the life of Jake Sully, a paraplegic ex-marine who is sent to the Pandora moon as part of a mission. He soon becomes torn between following the orders he is given and protecting Pandora, a place he calls home. Avatar stars Sam Worthington as Jake.

Riddick is a 2013 is a science-fiction thriller movie that is the 3rd movie in a series of 3- Pitch Black in 2000 and The Chronicles of Riddick in 2004. Riddick is the title character, who is left to die on a planet where an alien race of predators live. Riddick stars Vin Diesel as Riddick.

John Carter is a 2012 science fiction movie that is based on the 1912 book titled A Princess of Mars, the 1st in a series of 11 books written by Edgar Rice Burroughs. The movie is about John Carter, a Civil War vet who escapes a planet full of 12-foot barbarians, only to come across Woola, a large creature and Dejah Thoris, Princess of Helium, who are in dire need of a savior. John Carter stars Taylor Kitsch as John Carter and Lynn Collins as Dejah Thoris.

Serenity is a 2005 space Western movie that is based on the events that occurs after the television series Firefly, which aired on Fox for 1 season from September 20, 2002 to December 20, 2002 and features the same cast members. The movie is about Captain Malcolm Reynolds and First Mate Zoe Washburne, who come across a psychic passenger, River Tom, an evil passenger with a dangerous secret. Serenity stars Chris Pine as Captain James Kirk, Zachary Quinto as Commander Spock, Karl Urban as Lieutenant Commander Leonard McCoy, Zoe Saldana as Lieutenant Nyota Uhura, John Cho as Lieutenant Hikaru Sulu and Anton Yelchin as Ensign Pavelchekov.

So are you excited for this new movie? Do you know of any other great movies like Rogue One? Tell us what you think of these films, and what films we should be checking out also in the comments!