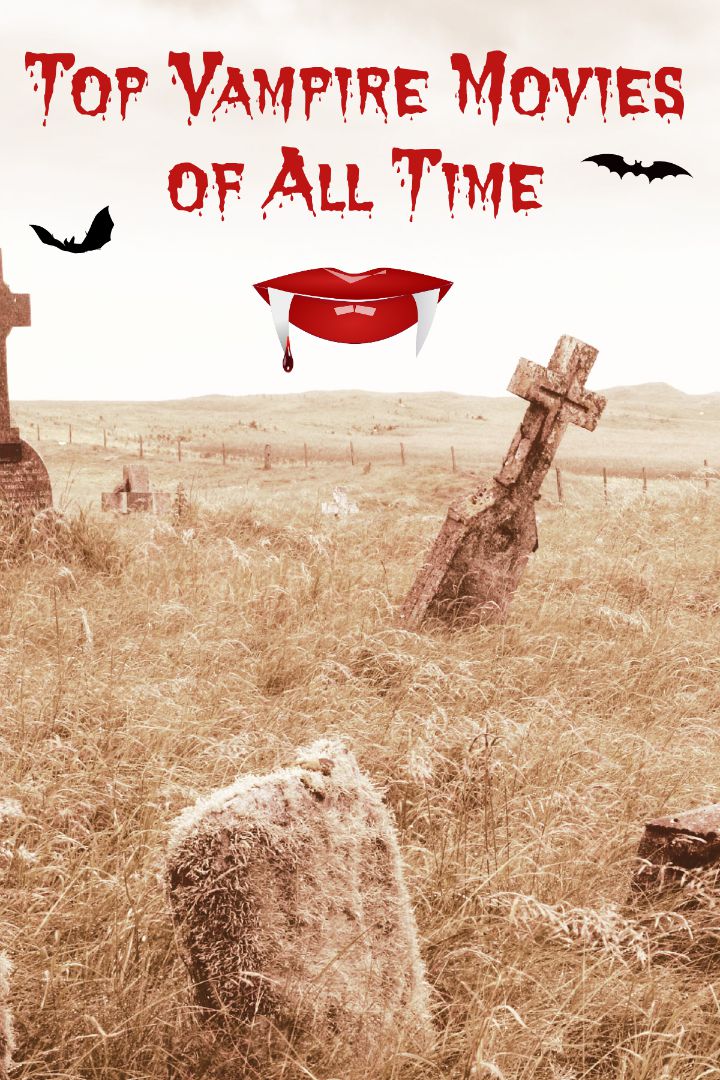 Raise your hand if you can’t get enough of vampire movies! Ever since way, way back in our great-grandparents’ days when Bela Lugosi played Dracula and charmed his way Mina’s good graces, we’ve gone nuts for the fanged bad boy. Sometimes he’s the hero, sometimes he’s the villain. Sometimes both! Whether he’s tearing he’s figuratively or literally breaking hearts, we can’t deny the appeal of the world’s most famous creature of the night. Today we’re sharing a few of the top vampire movies of all time! See if you agree with our picks!

Top Vampire Movies of all Time

Kiss of the Damned

Kiss of the Damned was released in 2013, starring Josephine de La Baume, Roxanne Mesquida, Milo Ventimiglia, Anna Mouglalis and Riley Keough. Kiss of the Damned is a vampire movies minus the gore. It is the story of how modern vampires live their lives and is focused on the romance of a writer and a vampire. It is by no means a love story though.

My pick for the top of the top vampire movies of all time, The Lost Boys was released in 1987, starring Jason Patric, Corey Feldman, Kiefer Sutherland, Corey Haim and Dianne Wiest. Anyone who grew up in the 80s will be able to tell you about this movie, it was a Gen-X must-see.  In The Lost Boys, the vamps are pretty nasty. Darn cute, but nasty! Their motto? Sleep all day, party all night, never grow old, never die. The “Lost Boys” part is a play on Peter Pan’s boys of Neverland, except far more vicious. Well, not really, if you’ve ever read the REAL Peter Pan, they weren’t all that sweet either.

There are some interesting characters throughout the movie include Grandpa, a senile old man who is really a talented vampire hunter, as well as Edgar and Allen, brothers who view it as their destiny to get rid of vampires as children.

Interview with the Vampire

Interview with the Vampire was released in 1994, starring Tom Cruise, Brad Pitt, Christian Slater, Kirsten Dunst and Antonio Banderas. This is the tale of two vampires who aren’t exactly friends yet they just can’t stand to be apart from one another either. Louis is relatively kind-hearted and gentle, while Lestat is a rock-and-roll bad boy. Together, they balance each other out. The movie was based on Ann Rice’s best-selling novel. While it doesn’t follow the book perfectly, they did a pretty good job. Sadly, they skipped The Vampire Lestat and completely slaughtered Queen of the Damned.

Bram Stoker’s Dracula was released in 1992, starring Gary Oldman, Winona Ryder, Anthony Hopkins and Keanu Reeves. This version is based on the classic book by Bram Stoker. Dracula sets out for London to meet Mina Harker, a heroine who looks a lot like his late wife. Keanu Reeves plays the role of Jonathan Harker, a young lawyer imprisoned by Dracula and Anthony Hopkins plays the role of Van Helsing, a vampire hunter. Dracula lunges at the necks of others as a means to avenge the death of his wife rather than a lust for blood. Of all the retellings of Dracula, this was my favorite.

You can’t really mention the top vampire movies of all time without adding Twilight to the list. While it’s debatable as the whether it belongs, it was definitely a huge hit in the box office. Me? I read the books and enjoyed them for what they were: fluffy fun. Same with the movies. Were they cinematic genius? Depends on who you ask. Me? I watched them once because I read the books. Kristen Stewart’s was criticized for her acting skills- or lack of- in these films, but keep in mind that the character she played had a flat personality herself.

Do you have any other suggestions for the top vampire movies of all time? Share in the comments!