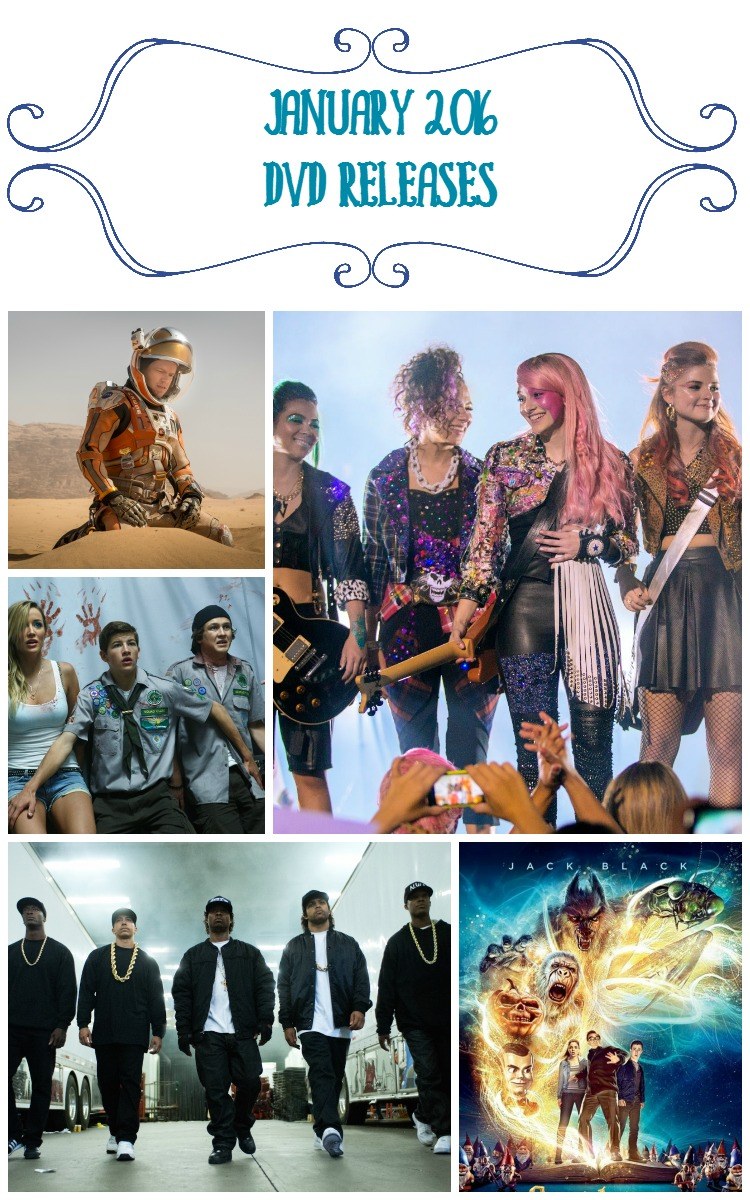 It’s not only a new year, it’s a new month! That means new DVD releases! Woohoo! The January 2016 DVD releases feature some awesome movies with a little something for everyone. From total spookfests like The Visit and the Green Inferno to family flicks like Hotel Transylvania 2, it’s a great month to snuggle up on the couch and watch a few movies with your best friend! You can check these tv user guides too in case your unit runs into a problem.

Sicario– Sicario is a 2015 action thriller film that stars Josh Brolin, Emily Blunt and Benicio del Toro. An FBI agent is assigned to take down a dangerous Mexican drug cartel.

The Walk- The Walk is a 2015 3D biographical drama movie starring Joseph Gordon-Levitt, Ben Kingsley, James Badge Dale and Charlotte Le Bon. It is based on the true story of Philippe Petit, a high-wire artist who walked on a tightrope between the World Trade Center Towers in 1974.

is a 2015 comedy film that stars David Spade, Brittany Daniel, Adam Beach, Dennis Miller, Mark McGrath and Christopher Walken. Joe Dirt takes a journey in order to find his way back to those he loves.

is a 2015 horror comedy movie starring Tye Sheridan, Logan Miller, Joey Morgan, Sarah Dumont and David Koechner. When three scouts try to save their town from a zombie outbreak, they find out the true meaning of friendship.

The Green Inferno– The Green Inferno is a 2013 splatter horror film that stars Lorenza Izzo, Ariel Levy, Ignacia Allamand, Daryl Sabara, Aaron Burns, Kirby Bliss Blanton, Magda Apanowicz and Nicolas Martinez. A group of activists set out on a journey to save the Amazon Rain Forest but are held hostage by a tribe of Indian cannibals after their plane crashes.

Sinister 2– Sinister 2 is a 2015 supernatural horror movie, a sequel to the 2012 movie titled Sinister. The movie stars James Ransone and Shannyn Sossamon. When a mother and her twin boy’s movie into a new home that is undoubtedly a trap for death.

Irrational Man– Irrational Man is a 2015 mystery drama movie starring Joaquin Phoenix, Parker Posey, Emma Stone and Jamie Blackley. Joaquin Phoenix plays the role of Professor Abe Lucas, a philosophy professor who loves wine and women yet unexpectedly falls in love with one of his students.

The Intern– The Intern is a 2015 comedy film that stars Robert De Niro and Anne Hathaway alongside Rene Russo, Adam DeVine, Zack Pearlman, Christina Scherer and Anders Holm. Ben Whittaker decides that he is bored with retirement and takes a job as a senior intern with an internet fashion site.

is a 2015 survival movie that features an all-star cast including Josh Brolin, Jason Clarke, Robin Wright, Keira Knightley, John Hawkes, Emily Watson and Jake Gyllenhaal. The movie is derived from the real life events of the Mount Everest expedition disaster in 1996.

is a 2015 musical fantasy film that is somewhat based on the television series titled Jem, that ran from 1985 to 1988. The movie stars Aubrey Peeples, Hayley Kiyoko, Stefanie Scott, Juliette Lewis, Aurora Perrineau and Ryan Guzman.

Learning to Drive– Learning to Drive is a 2014 comedy movie that is based on the 2002 The New Yorker essay written by Katha Pollitt. The movie stars Patricia Clarkson, Ben Kingsley, Jake Weber and Grace Gummer. A newly divorced woman learns to drive for the first time in order to become self-sufficient and forms an unlikely friendship with her driving instructor.

is a 2015 drama movie starring Bradley Cooper, Daniel Bruhl, Sienna Miller, Henry Goodman, Emma Thompson and Uma Thurman. Cooper plays the role of chef Adam Jones, who is determined to get his career back on track after destroying it with drug use and diva-like behavior.

Goosebumps– Goosebumps is a 2015 3D horror comedy that combines live action and computer animation, based on the series of books of the same name by author R.L. Stine. Goosebumps stars Jack Black, Dylan Minnette, Odeya Rush and Ryan Lee. When a writer’s demons are unleashed on the town, it is up to his daughter and her neighbor to put them back where they belong.

The Wannabe– The Wannabe is a 2015 drama movie that stars Patricia Arquette, Vincent Piazza, Michael Imperoli, David Zayas and Domenick Lombardozzi. The film is based on the real lives of married couple Thomas and Rosemarie Uva who were killed in 1992 by the NY mafia.

Which of these January 2016 DVD releases are you most looking forward to seeing? Which have you already seen in theaters? Tell us in the comments!