I am always looking for more TV shows like Riverdale and Pretty Little Liars once I finish a good binge session.

Both of these shows just suck me right in, and before I know I’ve watched the entire series in less than a few weeks!

Then, of course, I go through withdrawals! 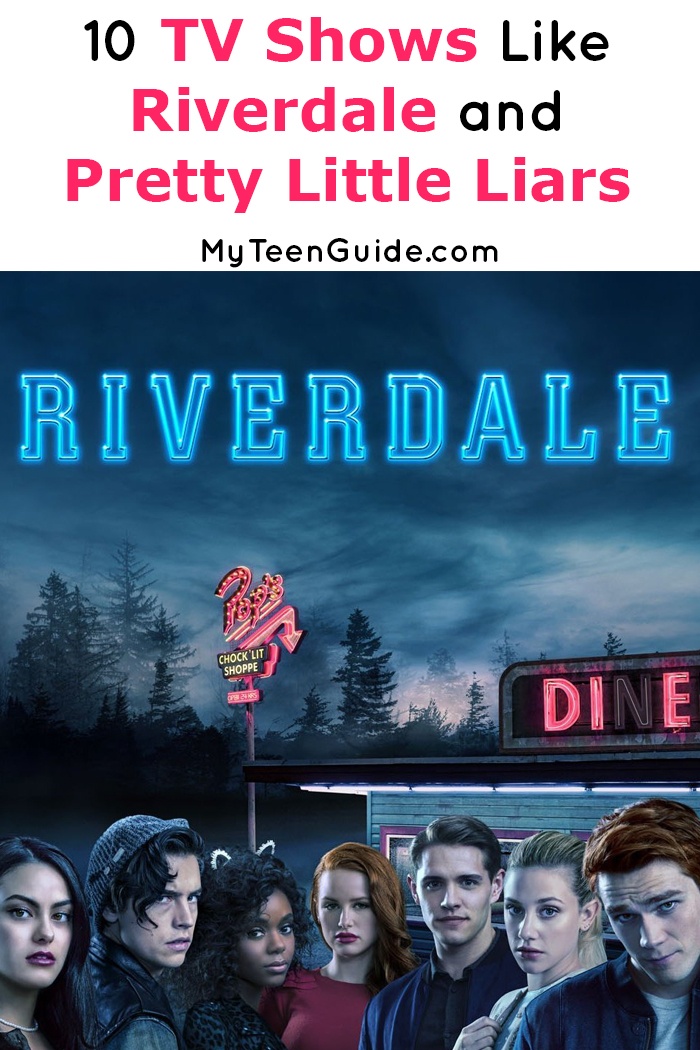 Rather than start watching them all over again, I try to find some similar shows.

Read on to learn a bit about both shows, then see which other shows I recommend!

Related:80+ TV Shows Like the One You Just Finished Binging! (Plus Free PDF)

So, I watched all 7 seasons of Pretty Little Liars

(and I highly recommend that if you haven’t seen the show, take a few rainy or snowy weekends to binge watch it) and I just finished the first two seasons of Riverdale (Season 3 premieres on October 10, 2018).

Something that has surprised me is not only how similar these 2 shows are, in some respects, but also how they are both similar to other shows as well.

Let me briefly explain what Riverdale is all about for those of you who haven’t seen it yet. (I won’t explain Pretty Little Liars (PLL) because it’s not on any longer and we have covered it quite a bit in the past).

Interested in learning about some of the similarities between Riverdale and PLL? Heads up: if you haven’t watched the complete PLL series or caught up on Riverdale, there are some spoilers below!

So, let’s talk about some of the TV shows (and I included similar movies too) that are similar to Riverdale and Pretty Little Liars. (So, the similarities sections are based on my opinion from either watching the show or having extensive knowledge of the show. So, please don’t laugh and by all means, let me know your opinions as well).

FYI, I’ve watched all of these shows straight through at least once, if not multiple times!

Buffy the Vampire Slayer is an action, drama, fantasy, supernatural television series that is based on the 1992 movie. The series aired for 7 seasons, from 1997-2003. Buffy Summers (Sarah Michelle Gellar) not only slays vampires, but also demons and other dark forces, with the help of her friends  Willow (Alyson Hannigan) and Xander (Nicolas Brendon).

Gossip Girl is a teen, drama, romance television series that is based on the book series by Cecily von Ziegesar. The series aired for 6 seasons, from 2007-2012. Gossip Girl focuses on a group of privileged high school students who are being watched by a ruthless, unknown blogger, who knows their deepest, darkest secrets.

Scream is an anthology, drama, horror, mystery television series that is based on the horror film series. The series has aired for 2 seasons so far, premiering in 2015. Scream follows a group of teenagers who are being targeted by a masked serial killer. Netflix features Seasons 1 & 2 of Scream.

Teen Wolf is a teen, drama, horror, romance, supernatural television series that is based on the 1985 movie. The series aired for 6 seasons, from 2011-2017. Teen Wolf focuses on Scott McCall (Tyler Posey), a werewolf and his best friend Stiles Stilinski (Dylan O’Brien), a human, as the pair often find themselves in the middle of drama and the center of trouble.

The Vampire Diaries is a drama, fantasy, horror, supernatural television series that is based on the book series by L.J. Smith. The series aired for 8 seasons, from 2009-2017. The Vampire Diaries focuses on Elena Gilbert (Nina Dobrev), a young teen girl who falls in love with vampire brothers- Stefan Salvatore (Paul Wesley) and Damon Salvatore (Ian Somerhalder), as they unearth the dangers, disasters, horrors and secrets of their small town. Netflix has Seasons 1-8 of The Vampire Diaries.

Veronica Mars is a teen, comedy, drama, mystery television series that aired for 3 seasons, from 2004-2007. The series focuses on Veronica Mars (Kristen Bell), a high school student with exceptional detective skills, as she solves some of her small town’s most challenging mysteries.

PS- if anyone knows where to stream this for free, let me know! I own the DVDs, but would love to be able to watch it on my iPad. Right now, you can buy it on Amazon.

Love, Simon is a 2018 teen, comedy, drama, romance movie that is based on the 2015 novel- Simon vs. the Homo Sapiens Agenda by Becky Albertalli.

Riverdale Similarities- The movie’s main character- Simon Spier (Nick Robinson) is a lot like Riverdale’s Kevin- they are both gay high school students who are sometimes left out and misunderstood, but both have high hopes for the future.

8. The Edge of Seventeen

The Edge of Seventeen is a 2016 coming-of-age, comedy, drama movie starring Hailee Steinfeld.

Easy A is a 2010 teen comedy, drama, romance movie starring Emma Stone. The movie starts out with a lie that quickly spins out of control, until it ends up ruining at least one life!

PLL Similarities– Both the movie and the TV series showcase how lies can easily spin out of control and also how teen gossip spreads like wildfire throughout high school hallways.

Mean Girls is a 2004 teen comedy movie that is partially based on the 2002 book- Queen Bees and Wannabes by Rosalind Wiseman.

Every one of these TV shows like Riverdale and Pretty Little Liars is worth watching a few times! In fact, Buffy the Vampire Slayer and PLL are both kind of like my “comfort food” of television fixbodygroup.com. Whenever I can’t find something else to watch or just want something familiar, I go to them!