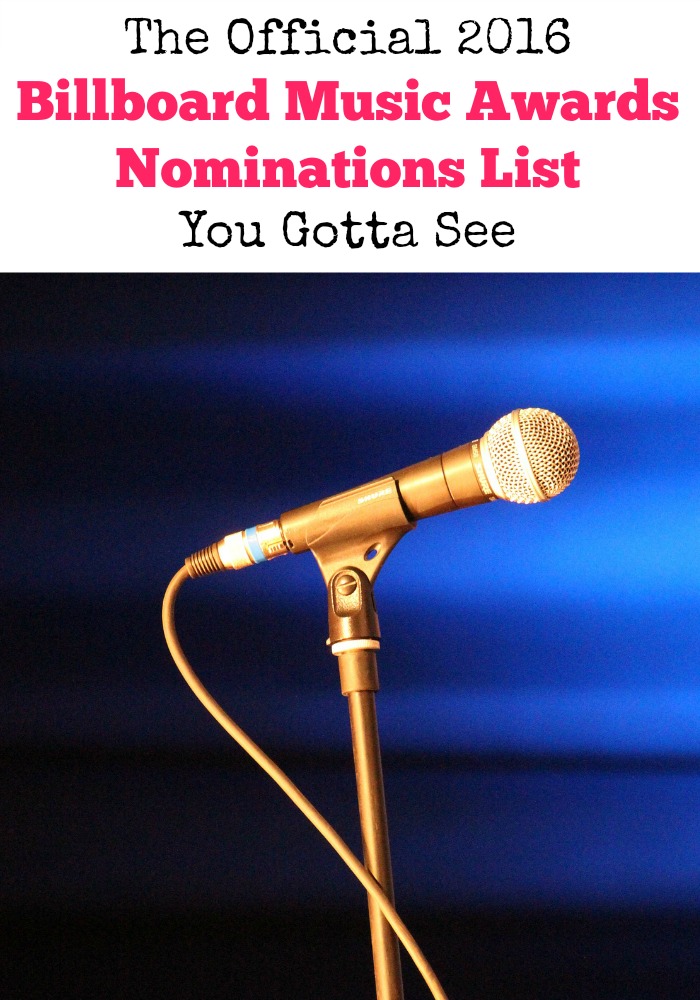 The 2016 Billboard Music Awards nominations are here, and I can’t wait to see who tops the charts this year. The Billboard 100 lists have long been one of my fav places to relive the top music every year. The performers who end up on this list are idolized, and seriously have some of the biggest hits of the year across all music styles. Below I’m giving you a few insider deets about the nominations, as well as the full list of 2016 Billboard Music Awards nomination. I included some of my predictions because you know I’m going to get a bit mouthy. Make sure to tell me your predictions at the end of this list!

The nominees for the 2016 Billboard Music Awards were announced officially on ABC’s Good Morning America. The awards show will be aired live on May 22, 2016, at 8:00 p.m. ET on the ABC Network. The show will be held in Las Vegas, Nevada at the T-Mobile Arena and will be hosted by Ludacris and Ciara. This is the 3rd time Ludacris has hosted, as he also hosted in 2014 and 2015. Ciara is hosting the Billboard Awards for the first time alongside him. The Weeknd earned nineteen nominations, the most for this year. Justin Bieber earned twelve nominations pulling in at second place.

Top Artist:
Adele- I love her, and so many of her songs are some of my all-time favorites such as Hello, Water Under the Bridge and When We Were Young. Not only is her music amazing, she as an artist is simply fabulous.
Justin Bieber
Drake
Taylor Swift
The Weeknd

Top New Artist:
Fetty Wap
OMI
Charlie Puth- I am a huge fan of Paul Walker, so when Puth came out with the song See You Again for the movie Furious 7, I totally fell in love with him. Also, I like his song Marvin Gaye with Meghan Trainor.
Silentó
Bryson Tiller

Top Male Artist:
Justin Bieber
Drake
Fetty Wap
Ed Sheeran
The Weeknd- This is a tough one between Justin Bieber and The Weeknd, but 2015 was a huge year for The Weeknd.

Top Female Artist:
Adele- Another tough one between Adele and Taylor Swift but Adele made a comeback in 2015, and she made a huge splash on the music scene.
Selena Gomez
Ariana Grande
Rihanna
Taylor Swift

Top Duo/Group:
Maroon 5- While I realize that One Direction is huge, I love Maroon 5, and I love Adam Levine.
One Direction
Twenty- One Pilots
The Rolling Stones
U2

Top Billboard 200 Artist:
Adele- Have to go with Adele again as she is so amazing!
Justin Bieber
Drake
Taylor Swift
The Weeknd

Top Hot 100 Artist:
Justin Bieber- Tough one since all the nominees,had a great year but Bieber I think edges everyone out, especially with his hot songs Sorry, Love Yourself and Company.
Drake
Fetty Wap
Taylor Swift
The Weeknd

Top Radio Songs Artist:
Justin Bieber- Again with Bieber and his hit songs, he has a great chance here as he’s on the 2016 Billboard Music Awards nominations so many times this year. No saying “Sorry” this time!
Ellie Goulding
Ed Sheeran
Taylor Swift
The Weeknd

Top Streaming Songs Artist:
Justin Bieber- I think this is a toss between Bieber and The Weeknd, but I am going with the Biebs on this one.
Drake
Fetty Wap
Silentó
The Weeknd

Top Touring Artist:
Madonna
One Direction
The Rolling Stones
Taylor Swift- Definitely Taylor Swift and her 2015 tour, The 1989 World Tour. I would totally expect to see Taylor Swift on the 2016 Billboard Music Awards nominations list.
U2

Top R&B Artist:
Chris Brown- When he came out with his 1st single, Run It, which went to #1, in 2005, I totally loved his music. Other songs I like by him include Kiss Kiss (which also hit #1), Yeah 3X and Liquor.
Jeremih
Rihanna
Bryson Tiller
The Weeknd

Top Dance/Electronic Artist:
The Chainsmokers
DJ Snake
David Guetta- Guetta was born in Paris, France and makes his living as a house music DJ. To date, he has three #1 hits, Getting Over You featuring Fergie and LMFAO, Sweat featuring Snopp Dogg and Dangerous featuring Sam Martin.
Major Lazer
Zedd

Top Billboard 200 Album:
Adele, 25- Yes, I am going with Adele yet again. 2015 was a huge year for her.
Justin Bieber, Purpose
Ed Sheeran, x
Taylor Swift, 1989
The Weeknd, Beauty Behind the Madness

Top Rap Album:
Drake, If You’re Reading This It’s Too Late- I like Drake, and I like this album. It is his 4th mix, which was released on February 13, 2015, to the iTunes Store with no notice. Drake totally deserves to be on the 2016 Billboard Music Awards nominations list; everyone is singing to his song.
Drake & Future, What A Time to Be Alive
Dr. Dre, Compton
Kendrick Lamar, To Pimp a Butterfly
Meek Mill, Dreams Worth More Than Money

Top Country Album:
Chris Stapleton, Traveller
Luke Bryan, Kill The Lights- Love my Luke! This is one of Luke Bryan’s best albums. It is his 5th studio album, released on August 7, 2015, and features the singles Kick the Dust Up and Strip It Down.
Sam Hunt, Montevallo
Zac Brown Band, Jekyll + Hyde
Carrie Underwood, Storyteller

Top Christian Album:
Lauren Daigle, How Can It Be
Hillsong UNITED, Empires
Joey + Rory, Hymns That Are Important to Us
TobyMac, This Is Not a Test
Chris Tomlin, Adore: Christmas Songs of Worship

Top Selling Song:
Adele, “Hello”
Wiz Khalifa ft. Charlie Puth, “See You Again”
OMI, “Cheerleader”
Rachel Platten, “Fight Song”- While these are all great songs, I love this song. Platten debuted this song on February 19, 2015. The song is inspirational with a positive message and captivating lyrics.
The Weeknd, “The Hills”

Top Streaming Song (Video):
Fetty Wap, “Trap Queen”
Wiz Khalifa ft. Charlie Puth, “See You Again”- OMG! I so love this video. I am sure it is partly due to the fact I love Furious 7 and Paul Walker. The video was released on YouTube on April 6, 2015, and features footage from the movie Furious 7.
Mark Ronson Featuring Bruno Mars, “Uptown Funk!”
Silentó, “Watch Me”
The Weeknd, “The Hills”

Top R&B Song:
Alessia Cara “Here”
Omarion Featuring Chris Brown & Jhene Aiko, “Post to Be”
The Weeknd, “Can’t Feel My Face”- Tough choice but this is a great song. The song was released on June 8, 2015, and is featured on his 2nd studio album, Beauty Behind the Madness, released on August 28, 2015.
The Weeknd, “Earned It (Fifty Shades of Grey)”
The Weeknd, “The Hills”

Top Rock Song:
Fall Out Boy, “Uma Thurman”- Uma Thurman was released by Fall Out Boy on January 12, 2015. It features sample music from the theme song of the TV show The Munsters and pays tribute to actress Uma Thurman.
Elle King, “Ex’s & Oh’s”
Twenty- One Pilots, “Stressed Out”
Walk the Moon, “Shut Up and Dance”
X Ambassadors, “Renegades”

So lovelies, are you super excited about the 2016 Billboard Music Awards Nominations? Who are your picks to win this year? I want to know in the comments!