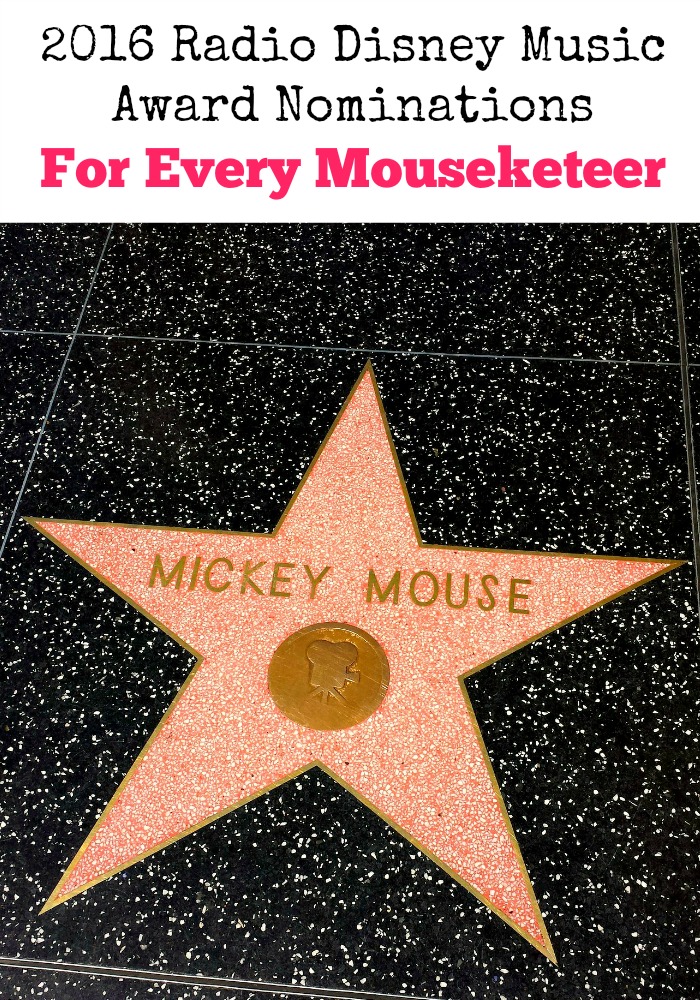 Get ready for the 2016 Radio Disney Awards! The mouse is back and ready to tell you his picks for the best music this year. Most of these musicians have already been talked about quite a bit in other awards shows this year because they’re amazing! I wonder how many awards Bieber will take this time!  Check out all the details along with my comments on the 2016 Radio Disney Music Award nominations list.

The 2016 Radio Disney Music Awards will be held on April 30, 2016, and televised on May 1, 2016. The awards ceremony will be held in Los Angeles at The Microsoft Theater and will air on The Disney Channel. The Radio Disney Music Awards debuted in 2002, but since there were no ceremonies from 2007 to 2012, this year will be the 9th annual awards ceremonies. From 2002 to 2006, the award ceremonies were audio-only recording, with the first live ceremony being held in 2013. Since its inception, Hilary Duff has had the most nominations with twenty-five and the most wins with fourteen.

Both the performances and the presenters are full of stars to make sure the mouse awards are fab. Scheduled to perform at the 2016 Radio Disney Music Awards include artists like Ariana Grande, DNCE, Laura Marano, Sabrina Carpenter, Kelsea Ballerini, Hailee Steinfeld and Daya. Scheduled presenters at the awards include stars such as Maddie and Tae, Cameron Boyce, Pete Wentz, Katherine McNamara, Emeraude Toubia, Jacob Whitesides and Alli Simpson.

“Best Male Artist”
Ed Sheeran
Justin Bieber
Nick Jonas- I was a huge fan of the Jonas Brothers and loved Camp Rock. Nick may be the youngest Jonas, but he is all grown up. His songs Chains and Jealous are my favorite.
Shawn Mendes

“Best Female Artist”
Adele- Oh how I love Adele. Her song Hello is one of the most amazing songs of all time.
Meghan Trainor
Selena Gomez
Taylor Swift

“Song of The Year”
Bad Blood – Taylor Swift- I have to say, as much as I love country music, I like Taylor much better as a pop artist than a country artist. Bad Blood is such an amazing song, and anyone out there who has ever been betrayed by someone close to them can totally relate to this song.
Cheerleader – OMI
Stitches – Shawn Mendes
Watch Me (Whip/Nae Nae) – Silento

“Best Crush Song”
Love Me Like You Do – Ellie Goulding
One Call Away – Charlie Puth
Perfect – One Direction- I love all of their songs but Perfect is my all-time favorite.
Should’ve Been Us – Tori Kelly

“Fiercest Fans”
Beliebers- If I know one thing, I do know that you don’t mess with Justin Bieber fans. They are certainly fierce and a force to be reckoned with.
Directioners
Harmonizers
Swifties

“Breakout Artist of the Year”
Alessia Cara
Charlie Puth
Rachel Platten- Rachel’s song “Fight Song” is so amazing. I listen to it all the time. Her song “Stand by You” is also completely fantastic.
Tori Kelly

“Best New Artist”
DNCE
Daya
Kelsea Ballerini- When she hit the country music scene, I knew she was gong to make a splash. Her singles Dibs, Love Me Like You Mean It and Peter Pan are awesome.
Nathan Sykes

“Best Song That Makes You Smile”
Better When I’m Dancing – Meghan Trainor- I honestly think all of Meghan’s songs make you smile but this one especially.  It has bits of house music and bits of doo-wop all mixed together.
Cheerleader – OMI
I Don’t Like It, I Love It – Flo Rida

“Radio Disney’s Most Talked About Artist”
Justin Bieber- Wow, these three were all talked about quite a bit. Bieber is in the news and tabloids a lot for both his music and the drama that follows him.
One Direction
Taylor Swift

“Best Song to Lip Sync to”
Cake by The Ocean – DNCE- This is a song I lip sync to quite often.
Dessert (feat. Silento) – Dawin
Gibberish (feat. Hoodie Allen) – MAX
What Do You Mean? – Justin Bieber

“Best Anthem”
Cake by The Ocean – DNCE
Confident – Demi Lovato- If there has been a better anthem song out there, I certainly don’t know what it is. The song is loaded with confidence and empowerment.
Eyes Wide Open – Sabrina Carpenter
Honey, I’m Good – Andy Grammer

“Best Song to Dance to”
Break a Sweat – Becky G
Focus – Ariana Grande
Uma Thurman – Fall Out Boy- While these are all great songs to dance to, I have to go with the fun song Uma Thurman. Between the upbeat tempo and electric guitar riff, this song will have you dancing in no time.
Watch Me (Whip/Nae Nae) – Silento

“Best Breakup Song”
Bad Blood – Taylor Swift- There is no better breakup song than Bad Blood. With lyrics like, “These beats of a dark heart, use bass lines to replace you. Take time to erase you, love don’t hear no more,” it is a pretty powerful breakup song.
Hello – Adele
Sorry – Justin Bieber
Stitches – Shawn Mendes

“Artist with The Best Style”
Becky G
Gwen Stefani
Taylor Swift
Zendaya- This girl has style. She’s a singer, an actress and TV spokesperson for Cover Girl. She also has her own line of activewear, Shake It Up Dance Clothing Line by Zendaya.

“Country Favorite Song”
Dibs – Kelsea Ballerini- I love this song. It is so upbeat and has a ton of spunk.
Fly – Maddie & Tae
God Made Girls – RaeLynn
Nothin’ Like You – Dan + Shay

Do you see your fav musician on the 2016 Radio Disney Music Award nominations list? Tell me in the comments!