Get ready for all the First Man movie quotes, trivia, and cast info you can handle!

I’m so excited about Ryan Gosling‘s new movies that I can’t stop reading about it!

In case you haven’t heard, First Man is all about the first guy to step foot on the moon.

It’s his story like you’ve never heard it, and a must-see for all space fans, as well as anyone who loves drama movies.

Let’s check out everything you need to know about it! 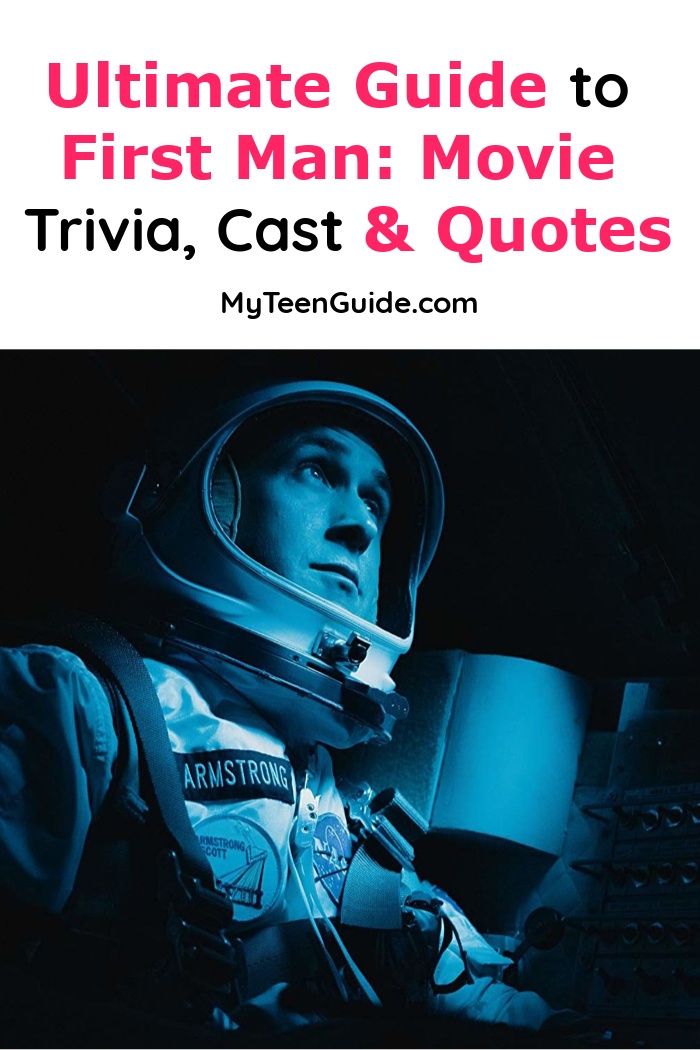 You’ve probably heard of the Apollo 11 lunar mission, haven’t you? Well, in case you haven’t, July 20, 1969 marked the first time in history that anyone had landed on the moon.

First Man is an upcoming biographical drama that is based on the 2005 official biography- First Man: The Life of Neil A. Armstrong

– by James R. Hansen. The movie focuses on the years leading up to Armstrong’s famous and historical mission on the moon. First Man is set to hit movie theaters on October 12, 2018.

Read on for everything you need to know about the cast, plus check out some great First Man movie quotes & trivia!

Besides being the 1st person to walk on the moon, Neil Armstrong was also a retired astronaut, aeronautical engineer, Naval Aviator, test pilot and University professor.

The stunning Claire Foy plays Janet Armstrong, who was Neil’s first wife. They were married on January 28, 1956 and divorced on April 12, 1994, after 38 years of marriage.

Buzz Aldrin is a retired astronaut and United States Air Force Command Pilot. He was alongside Armstrong in the Apollo mission, making him the 2nd person to walk on the moon.

Michael Collins is a retired astronaut and test pilot.

Deke Slayton, speaking to a group of NASA astronauts:

Deke- “We’ve chosen a job so difficult, requiring so many technological developments, we are going to have to start from scratch. Only after we master these tasks, do we consider trying to land on the moon.”

Conversation between a Reporter and Neil Armstrong, during an interview:

Reporter- “Neil, if this flight is successful, you’ll go down in history. What kind of thoughts do you have about that?”

Neil- “We’re planning on the flight being successful.”

Conversation between Rick Armstrong and his dad, Neil:

Rick- “Do you think you’re coming back?”

Neil- “There are risks, but we have every intention of coming back.”

Conversation between a Skeptical Reporter and Neil, during an interview:

Reporter- “Do you question whether the program is worth the cost in money and in lives?”

Neil- “You’re down here and you look up and you don’t think about it too much, but space exploration changes your perception. It allows us to see things that we should have seen a long time ago.”

Quotes from the 2nd movie trailer, released on August 29, 2018 by Universal Pictures. To date, just 2 days after its release, the trailer has received 1,945,422 views.

Neil Armstrong, singing the lullaby, I See the Moon, while holding his young, sleeping daughter:

Neil- “I see the moon, the moon sees me, shining through the leaves of the old oak tree.”

Deke- “Neil, everyone is in agreement, we’d like you to command.”

Conversation between Rick and his mom, Janet Armstrong:

Janet- “Nothing, honey. Your dad’s going to the moon.”

Janet- “What are the chances of not coming back? Those kids, they don’t have a father anymore. So you’re going to sit the boys down, and you’re going to prepare them for the fact that you might not ever come home.”

Damien Chazelle is First Man’s director. He has won both an Academy Award and a Golden Globe Award for Best Director for the 2016- La La Land (trailer above), which also stars Ryan Gosling in the movie’s lead role.

It’s already off to a great start!

First Man has already gotten off to a great start, even before being released in movie theaters, according to the two top review aggregators. Metacritic gave the movie a score of 81 out of 100, while Rotten Tomatoes gave the movie an approval rating of 89%, with an average rating of 8.4 out of 10.

Before Universal Pictures bought the film rights to the 2005 biography- First Man: The Life of Neil A. Armstrong- by James R. Hansen, Clint Eastwood and Warner Bros owned the film rights.

Based on an award-winning biography!

And speaking of James R. Hansen, did you know that he received an award for penning the 2005 authorized biography? He was awarded the American Astronautical Society’s Prize for Astronautical Literature.

Jon Bernthal was first choice for…

Jon Bernthal was originally cast for the role of David Scott. However, Bernthal had to leave the role due to a family emergency and was replaced by Christopher Abbott. (All you fans of The Walking Dead will remember Bernthal as Shane Walsh in Seasons 1 and 2).

If you love historical movies, space travel, or even just a good drama, I think you’re definitely going to want to see First Man on October 12th! I know I’ll be grabbing my tickets on Fandango before hitting the theater as soon as it comes out!

Have you heard any other great First Man movie quotes or trivia? Which cast member do you love the most? Share below!